The Only Way to Dump Trump Is to Vote for Clinton

Buffy Wicks, a Democratic strategist, worked for both Obama presidential campaigns and his administration and was Hillary Clinton's California State Director during the 2016 primary.

Donald Trump’s reference to the size of his endowment during last week’s Republican debate exemplifies the current state of our political discourse, and typifies the Good Old Boys club of politics. It’s this type of chauvinistic swagger embodied by the Republican candidates that will solidify a significant gender gap for Democrats, motivate women activists for Hillary Clinton and create the pathway for her to become the first women president.

The women’s vote just became more critical than ever.

Women can be motivated, dedicated activists. Campaigns are made up of volunteers, and research shows that grassroots conversations have a big effect on garnering support and increasing turnout on Election Day. I saw this firsthand in 2012 when I ran President Barack Obama’s mobilization and engagement programs for “the Obama coalition,” which was made up of women, young people, African Americans, Latinos, LGBT voters and other important groups. Leveraging all of the tools in our tool box—from digital strategy to field organizing to refined analytics—we built a massive army of volunteer leaders across the country to reach out to their neighbors and engage them in the election. A full 71% of these volunteer leaders were women.

Women were also the majority of our small dollar donors—60% to Mitt Romney’s 31%—and engaged more with our content on Facebook, Twitter and Instagram. Simply put, women were the backbone of our campaign, and the results speak for themselves: According to Gallup, Obama led with a 20-point gender gap.

Trump, meanwhile, faces problems with women primary voters. A Fox News poll taken in South Carolina last month found that 42% of women polled said they would never vote for Trump. He has often performed better among men than women. And if he is the Republican nominee, his disrespectful attitude toward women could hurt him this November.

Historically, the gender gap has proven to be a big hurdle for Republican presidential candidates. Women voters have a fundamental source of influence—we are the majority of the electorate. And we tend to vote Democratic.

In the past 12 presidential elections—since 1964—there have been more votes cast by women than men. In 2012, 63.7% of eligible women voted, compared to to 59.8% of eligible men. Since 1992, more women have voted for the Democratic presidential candidate than the Republican one.

Someone might want to remind Ohio Governor and Republican candidate John Kasich that women have been leaving our kitchens to campaign and vote for a long time.

We’re starting to see the primary electorate coalesce around Clinton, and women are a critical factor. Her success on Super Tuesday can be directly contributed to women voters—she won women 2-1 in Virginia and Texas, two-thirds of women in Tennessee and three-quarters of women in Arkansas, according to exit polls.

Clinton’s decision to “lean in” to the historic nature of her candidacy is a smart strategy—she launched Women for Hillary early in the campaign and is investing significant resources in a women’s vote program. In tone and rhetoric, she has embraced the role of being the first women president and breaking that the last glass ceiling. She has invested in paid media to communicate directly with women voters, and her campaign is investing in a sophisticated analytics operation, which will enable her field staff to build a robust volunteer operation to register, communicate to and turnout women voters. Clinton and her campaign strategists are smart to rally this critical Democratic base, and they can do it in authentic way given her biography and long-standing positions on issues women care about.

This strong grassroots investment coupled with a strong woman leader at the top of the ticket, women activists—the core of the Democratic base—will become even more engaged, mobilized and powerful in 2016. The women’s vote will be a critical, if not the critical demographic to save ourselves from a Trump presidency. 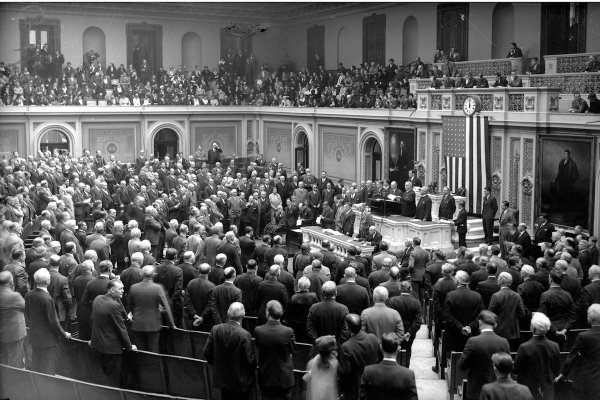 The Law That Started the New Deal
Next Up: Editor's Pick