Clinton and Sanders Clash at Democratic Debate in Flint

The water crisis in Flint led off Saturday’s Democratic debate in that town, where public health notices are positioned over the sinks on the very campus where Hillary Clinton and Bernie Sanders clashed.

Clinton pledged to support the recovery in a city where tap water is not safe to drink and children are suffering from lead poisoning. “What is more important than the health and well-being of the people of Flint?” Clinton said, noting the state of Michigan has a rainy-day fund. “It is raining lead in Flint and the state is derelict.”

Sanders, too, vowed to support citizens of Flint—and then demanded Republican Gov. Rick Snyder resign. “This is a disgrace beyond belief,” Sanders said. “Children should not be poisoned. … People should not pay a water bill for poisoned water.”

The conversation, broadcast on CNN, was one that both candidates were looking to use to make inroads in Michigan, which votes on Tuesday. The race here is tight, and both candidates are bracing for a long night of ballot counting. Clinton has the backing of the Establishment and many unions, but Sanders’ populism in the economically unstable state could help him finally find a win in a minority-heavy state.

As the pair debated the pipes and poisons in Flint, Sanders was declared the winner in Maine’s caucus. It added to his victories in Saturday’s contests in Kansas and Nebraska. Yet it was unlikely to upend a race that at the moment favors Clinton.

Clinton, even in loss, still is in control. She is amassing an advantage among delegates that Sanders will struggle to overcome. As Sanders picked up white-heavy Kansas and Nebraska—two states that are unlikely to tip to Democrats in November—Clinton picked up Louisiana, where African-Americans lent her a hand.

Heading into Tuesday’s primary in Michigan, Sanders faced the question of how much more he was willing to fight. Even when telling Democrats in Michigan about his victories one night before the debate, on Saturday, he sounded like a candidate who was contemplating an exit. “No matter who wins this Democratic nomination, I have not the slightest doubt that on our worst days, we will be infinitely better than the Republicans,” Sanders said.

Sunday night’s debate was clearly an effort to connect with Michigan residents and to demonstrate empathy for their troubles. Clinton advisers were privately bracing for a potential loss here, especially with Sanders dumping piles of cash into urban radio to boost his name with African-American audiences. He was also casting her record on trade as a reason for voters’ difficulties.

Clinton pushed back, noting that she voted against the one trade bill that was sent to the Senate during her eight years there. All of Sanders’ other criticism was rooted in Bill Clinton’s term as President, when Mrs. Clinton was First Lady. “If we’re going to argue about the 1990s, I think it’s only fair to say that the end of the 1990s, after two terms of my husband’s Presidency, the unemployment of 4.4%,” Hillary Clinton said. If they were going to litigate Bill Clinton’s legacy, she at least wanted voters to look back fondly on that booming economy.

Clinton has remained ahead of Sanders in the national race for delegates and, while he can win some states here and there, the former Secretary of State is keeping her focus on the delegate chart, which aides have put on a wall in her Brooklyn headquarters. “It’s a slog, but we’re going to come out on top,” one adviser said.

The Sunday night debate was a late addition to the schedule, but unavoidable given the crisis given the water disaster in the city. “This is a crisis. We cannot drink the water,” Flint Mayor Karen Weaver said. “What happened in Flint could happen in any community.”

Former President Bill Clinton spent his Saturday in Detroit, encouraging union members to work for his wife’s bid. Although the powerful UAW, Teamsters and the AFL-CIO were not going to take sides, others such as AFSCME, the American Federation of Teachers and LIUNA were knocking on doors for her. “She’s got the unions—or at least their leaders. You can’t overstate that impact,” said one neutral Democratic operative in Michigan whose clients include Clinton and Sanders backers. “It’s hard, if you’re a shift worker, to tell Bill Clinton no.”

It’s why Team Clinton is spending every day ahead of Tuesday’s balloting here. She has proven successful in winning over more diverse states, while Sanders has found success in largely-white states. A win in Michigan could prove immensely helpful ahead of March 15, when other swing states Ohio and Florida cast ballots. While Clinton has yet to clinch the Democrats’ nomination, she’s obviously looking ahead to the general election—and gleefully imagining a contest against GOP frontrunner Donald Trump.

“The stakes keep getting higher, and the rhetoric you’re hearing from the other side keeps sinking lower,” Clinton said Saturday night, making an allusion to Trump. It’s clear she’s ready to pivot to a head-to-head race with the man Establishment-minded Republicans see as being dragged to the muck by the New York billionaire. She’s betting luck is on her side. So far, it has been. 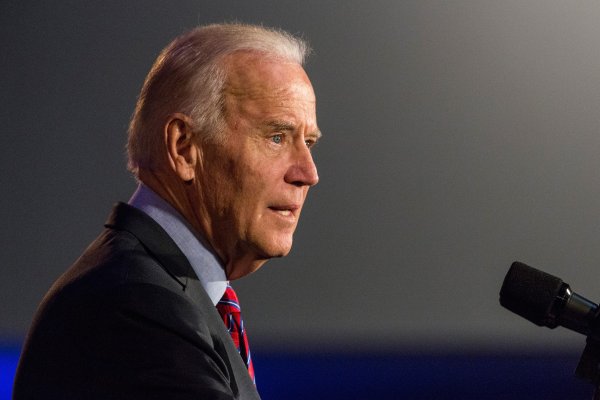 Joe Biden Slams Trump at the Annual Gridiron Dinner
Next Up: Editor's Pick