The detention today of Luiz Inácio Lula da Silva, Brazil’s former President and favored son, could be a key moment in the fall of a political dynasty that has this century reshaped Latin America’s largest nation.

The 70-year-old former metal worker, who is universally known as Lula and left office in early 2011 with an approval rating of 83% to be succeeded by his handpicked successor Dilma Rousseff, spent four hours being questioned by federal police in São Paulo after being detained by officers in a dawn raid at his home.

Federal prosecutors are investigating whether he was involved a corruption scandal centered on state oil giant Petrobras, in which scores of politicians, including many from Lula’s ruling Workers’ Party and businessmen are said to have siphoned off billions of dollars in bribes. The former President denies any wrongdoing.

“Lula, besides being party leader, was the one ultimately responsible for the decision on who would be the directors of Petrobras and was one of the main beneficiaries of these crimes,” a police statement said. “There is evidence that the crimes enriched him and financed electoral campaigns and … his political group.”

The police are also examining $8 million in speaking fees and donations to Lula’s institute by construction firms ensnared in the scandal, and whether renovations carried out at his properties were favors for political benefit.

The allegations had lapped ever closer to the former President in recent weeks, with the arrest of his former campaign strategist João Santana, but the raids at four properties linked to him were still a political earthquake in Brazil.

Rousseff, his chosen successor, is not being investigated in the case but faces impeachment proceedings in Brazil’s congress over government accounting irregularities. The Petrobras scandal and political turmoil has contributed to a deep recession in Brazil, with the country facing its worst slump in 25 years.

For Lula, it might be the moment his reputation and that of the Workers’ Party he founded under Brazil’s dictatorship in 1980 became damaged beyond repair. He became Brazil’s first working-class President in 2003, having left school early and worked as a shoeshine boy, lost a finger in an industrial accident and been jailed for leading a strike while a trade-union activist.

He promised a new era of social justice, and Lula’s welfare programs lifted tens of millions out of poverty as his budget surpluses during Brazil’s long boom put paid to the initial concerns of international markets and the International Monetary Fund. Lula became a unifying figure in a deeply unequal country and even a previous congressional corruption scandal that implicated his Chief of Staff hardly dented his popularity.

Lula lobbied for Rousseff, a bureaucrat who had never previously held elected office, to succeed him as the Workers’ Party candidate in 2010, and as recently as last week was discussing running for the presidency once again in 2018.

“Lula was an icon, but he is no longer untouchable,” says David Fleischer, a professor of politics at the University of Brasília. “His image has been severely damaged and his hopes of being elected in 2018 have been destroyed.”

Without a viable alternative candidate, the party is all but certain to lose power, he adds, even if Rousseff survives the impeachment proceedings this year and a separate attempt to overturn her narrow 2014 victory in an electoral court.

The Petrobras investigation, known as Operation Car Wash, has ensnared scores of this generation of Brazil’s political class including the conservative Speaker of the lower house, Eduardo Cunha, who it was ruled this week will face trial.

Prosecutors say they believe more than $2 billion was paid in bribes by businesses to obtain contracts and that some of the money made its way to political parties, including the Workers’ Party, to fund political campaigns.

It comes as Brazil faces its worst recession for decades, with falling commodity and oil prices hitting the economy hard. Cunha is leading the effort to impeach Rousseff, whose approval ratings amid the scandal have fallen to 11%.

Brazil’s institutions, especially its independent body of federal prosecutors, have won praise for their ability to investigate the ruling party. “Among emerging markets, the power of rule of law and an independent judiciary in Brazil is remarkable,” said Ian Bremmer, a political-science professor at New York University.

However, the detention of Lula came just days after Rousseff announced she would replace her Justice Minister, a move interpreted as perhaps opening the door to political interference in the high-profile investigation, which began as a probe into money laundered through a gas station in the south of Brazil.

On a live appearance on television, a visibly angry Lula said he was facing “prejudice as a working-class man” and that he “feared nothing.” Rousseff herself said the detention was “unnecessary” while adding she continued to back the investigation. Lula’s lawyers asked the Supreme Court to suspend the investigation into him.

And as the scandal played out at full volume on television all day, there were signs the mood was turning ugly. Clashes broke out between Lula’s supporters and detractors outside the ex-President’s apartment in São Paulo state and large-scale street protests are planned by both sides in the coming days. 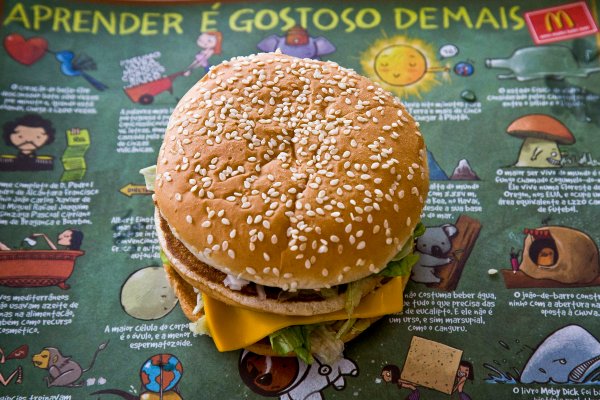 McDonald's Under Criminal Investigation in Brazil
Next Up: Editor's Pick