In a made-for-Michigan pitch, Hillary Clinton on Friday stood on a factory floor in Detroit and blasted corporate greed and anti-union politics as she cast herself as the best ally of workers.

Scolding corporations for hiding their profits overseas and promising to bring high-paying jobs back to American shores, Clinton delivered a speech like a modern Norma Rae armed with reams of policy papers. She tried to tap into a deep populism that has fueled the rise of Democratic rival Bernie Sanders, as well as GOP frontrunner Donald Trump.

“If you’re not going to invest in us, why should taxpayers invest in you?” she told a crowd at Detroit Manufacturing Systems, an auto parts supplier that makes plastic assemblies for doors and dashboards. “If you desert America, you’ll pay a price.”

Clinton also introduced a proposal that would punish companies that take advantage of tax incentives and then move their company overseas. The plan would rescind tax relief offers that were designed to encourage investment in the United States, a concept that an aide said emerged out of discussions with her aides in recent years.

Standing in Detroit, which has gone through crippling bankruptcy and is now beginning to see signs of life, Clinton praised the city’s nascent comeback. “Some of the most exciting technological breakthroughs are happening right here,” she said, pointing to driverless cars and the luxury manufacturer Shinola. “Not in China. Not in Germany. But in Michigan.”

Yet her motorcade passed reminders of the troubles. Down the block from the manufacturing site, three houses were abandoned, their windows covered in plywood. “We need to make sure Wall Street never threatens Main Street,” she said. “When unions are strong, families are strong and America is strong.”

Michigan has scheduled its primary for Tuesday, and 148 delegates to the Democratic convention are up for grabs. Mathematically, it is worth more delegates than the first three states of Iowa, New Hampshire and Nevada combined.

The fight over Michigan between Sanders and Clinton has been escalating for days. Both sides have taken to calling it the Showdown in Motown, although it’s said with a tongue firmly planted in the cheeks. Clinton has an advantage here; her audience on Friday afternoon was a roster of the Democratic Establishment, from sitting Senators to ex-Governors, former labor Presidents and local union officials. Sanders is counting on his populist image to overcome Clinton and her vastly superior organization.

Clinton made an early nod to her challenges in a state where trade deals have cost neighbors their jobs. She proudly said she voted against a Central American trade deal and opposes the current pact in the Pacific, but acknowledged the distrust some harbor for her family over the 1994 NAFTA agreement. She said voters in 2016 should not linger on something 20 years old.

She also sought to address concerns over her previous support for the Trans-Pacific Partnership, countering Sanders’ longstanding argument that she has flip-flopped over a deal that she once called “the gold standard” of trade agreements.

“I won’t support any agreement unless it helps create jobs and higher wages for American workers and protects our national security,” Clinton said.

She stood in front of her target voters In her crowd, many union members were wearing purple “SEIU for Hillary” T-shirts. “The unions that helped build our country—and the middle class—are under concerted attack,” she said. Behind her, many African-American and Hispanic employees of the company gave her event the patina of diversity.

The race in Michigan has been testy from the start. A day after his Super Tuesday clobbering, Sanders directed an advertisement in Michigan at Clinton: “Only one candidate for president has consistently fought trade deals that ship Michigan jobs overseas,” a voice intones in the ad. Sanders opposes the Trans-Pacific Partnership, “while others waffle,” according to 30-second spot.

The next day, two Clinton aides and Michigan Sen. Debbie Stabenow, who has endorsed the former Secretary of State, spoke with reporters on a conference call to question Sanders’ grasp on manufacturing issues. “Senator Sanders has obviously been talking about manufacturing now that the primaries in Michigan and Ohio are just days away,” senior policy advisor Jake Sullivan said on a call with reporters Thursday. “During his career in Congress, he has been AWOL on issues that would boost American manufacturers.”

Sullivan said Clinton’s criteria included raising wages, creating jobs and advancing national security. Last year, after months of hemming and hawing, she announced her opposition to the trade agreement. “When she looked at [the TPP agreement], she concluded immediately that it wasn’t up to snuff,” Sullivan said.

Sanders’ aides struck back by releasing a transcript of Clinton telling an audience of Indians in 2012 that outsourcing jobs has “advantages.” Clinton “has been a consistent advocate of the job-killing trade deals that have contributed to the loss of nearly 60,000 factories in the United States and almost 5 million manufacturing jobs over the last 15 years,” said Sanders campaign manager Jeff Weaver.

Sanders is clearly trying to hobble Clinton, although it’s not clear that voters in Michigan will respond, or even care. The heavily African-American primary electorate favors Clinton, and she has shown a willingness to fight hard when cornered. It’s why her aides are looking forward to Sunday night’s debate in Flint, Mich. She has finally become a formidable debater, and these made-for-TV nights tend to end to her benefit. 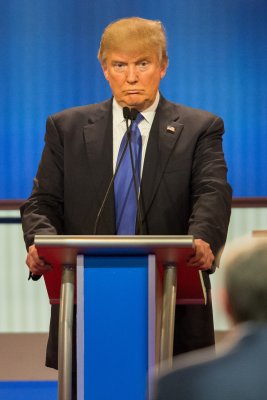 Trump Backs Off Promises to Break International Law
Next Up: Editor's Pick