How Bashar Assad Is Trying to Win the Peace in Syria

Residents and activists hold a giant pre-Baath Syrian flag, now used by the Syrian opposition, during an anti-regime protest in the rubble of destroyed buildings in the neighbourhood of Jobar, on the eastern outskirts of the capital Damascus, on March 3, 2016.
Amer Almohibany—AFP/Getty Images
By Jared Malsin/Cairo

Taking advantage of a ceasefire and a rare moment free from shelling, protesters reappeared on the streets in some opposition-held areas of Syria this week, demanding an end to the authoritarian regime led by President Bashar Assad. At one protest in Aleppo on Feb. 29, demonstrators strode through city, chanting the iconic slogan of the now five-year-old uprising: “The people demand the fall of the regime!”

Demonstrations also took place in rebel-held suburbs of Damascus, and in Deraa, the city in southern Syria where the uprising first began. On Mar. 4 in the town of Saraqeb, in northern Syria, one protester held a sign saying, “It’s a revolution, not a civil war.”

In the brief period of calm since the ceasefire went into effect on Feb. 27, the demonstrations recreated scenes familiar from the early days of the uprising against Assad, before unarmed protests turned to armed insurrection and civil war. Those scenes of protesters marching in the streets also illustrated the underlying political conflict between the regime and the opposition that is at the root of the Syrian war in which more than 250,000 people have been killed and more than 11 million forced to flee their homes since 2011. The regime and its allies argue that the war with rebel groups is a part of a struggle with against terrorists—including ISIS, which metastasized during the Syrian war—but this week’s peaceful demonstrations show that civil opposition to the regime continues, even in spite of brutality of the conflict.

Read More: The Sentencing of a Toddler Shows How Out of Control Egypt’s Regime Has Become

This week’s civilian protests took place during a brief respite from the Assad regime’s military campaign against rebel-held areas, thanks to a truce that went into effect Feb. 27. The protests also illustrated some of the underlying logic of the regime’s Russian-backed offensive, which is characterized by intensive bombing of rebel-held areas, starvation sieges, and other indiscriminate tactics. Analysts and activists say that the Assad regime’s collective punishment of civilians in opposition-held territory is in part an attempt to eliminate popular support for the rebellion. By making ordinary life impossible in rebel territory, the regime can crush any attempts to establish an insurgent government, and deny the rebels one of the elements of any successful insurrection: a supportive civilian population.

“It is brutal, but it’s not brutality for brutality’s sake,” says Christopher Kozak, an analyst at the Institute for the Study of War in Washington. “It’s calculated brutality, in order to demoralize the population, to prevent governance, to force the flight of populations.”

Kozak argues that the Assad regime has been deliberately seeking to “depopulate and demoralize” opposition-held sections of Syria, in order to obliterate the rebel political project. Many of the 4.8 million refugees who have fled Syria, and the 6.6 million people displaced within the country, are fleeing exactly the sort of indiscriminate bombing employed by the regime and its Russian backers. Deliberate or not, the large-scale depopulation of rebel-controlled Syria benefits the regime, analysts say. By draining rebel-held areas of the majority of their population, the regime can then claim to govern the bulk of the remaining population in Syria. Aleppo, for example, had been the largest city in pre-war Syria, with well over two million residents. Now, after five years of rebellion and war, the city is down to an estimated 300,000 people.

Read More: The Story Behind the Moving Portrait of a Syrian Rebel Fighter

Analysts say the regime’s attempts to crush the opposition could set an endgame for the conflict. Western powers, including the U.S., hope to eventually broker an end to the war through negotiations between the regime and the opposition. But Syria’s shifting demographics have become one argument in the regime’s argument for its survival—and ultimately, its primacy. “The ultimate threat to Syrian president Bashar Assad is the successful establishment of a credible alternative,” says Kozak. “The metric of success that the regime consistently points to is the fact that, ‘No one lives in the rebel-held areas, the bulk of the population lives in regime-held areas.”

“This is all about positioning for the diplomatic process,” adds Nicholas Heras, an analyst at the Center for a New American Security in Washington. “It’s Russia now saying ‘look, U.S. opposition supporting states, at the end of the day, the Assad regime has survived.”

As the ceasefire offers civilians in rebel-held areas a rare and welcome respite from brutality, the resumption of political protest poses a dilemma for both the regime and the rebels. This week’s protests were a reminder of how the conflict began—and also an opportunity for civilians to challenge the hegemony of armed rebel groups. Some of the most powerful rebel organizations are dominated by Islamists who disagree with civilian opposition groups on issues of governance and how Syria should be ruled in the future.

“War kills political space, but now there are no guns, why should it continue to kill political space?” said Fadi al-Qadi, a human rights advocate and commentator based in Amman, Jordan. “And I think the masses on the streets in these cities and towns and villages are proving this theory correct. No gun can take the place of the will of the people.” 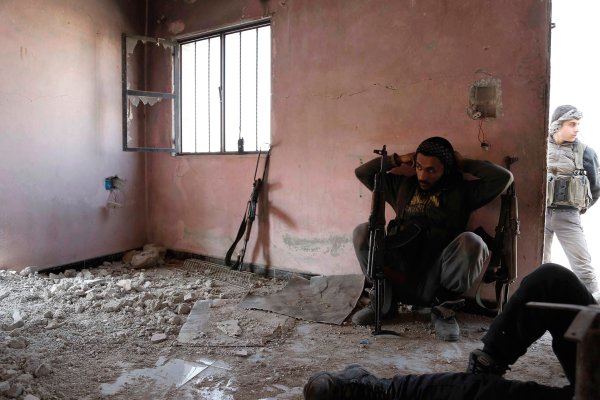 Syria's Cease-Fire Holds in Face of Reported Violations
Next Up: Editor's Pick