Frank Underwood, the fictional character from House of Cards, has written an opinion editorial saying that he would vote to leave the E.U. in the June 23 referendum.

“If I were a Brit I wonder if I’d be more afraid to stay in the E.U. than to leave” writes Underwood in the The Times of London. The piece was written by House of Cards creator Michael Dobbs who advocates Britain leaving the E.U., which has been nicknamed ‘Brexit’.

The Machiavellian character’s endorsement comes as a sort of mixed blessing for Brexit campaigners, who believe that the economic and political partnership between European countries is bad for British sovereignty.

“Brussels is a bit of a used bus ticket. Anyway I don’t ride buses. There was a time when Europeans rode chariots and sailed ships, had ambition, ideas, built great empires” writes Underwood, who was originally called Francis Urquhart in the British version of House of Cards . “They had two thousand years as the centre of the world but ask yourself. When did Europe last peel any potatoes? Their leaders have sat so long on their marble thrones that not only have their balls turned to concrete but their minds, too.”

In a similar vein to Eurosceptics, the Netflix series’ character takes aim at ‘undemocratic’ E.U. institutions.

“Once you become president of Europe, there’s no way they can get rid of you. Not ever,” he wrote. “No elections, no experience required. What an opportunity. It’s my kind of world.”

[The Times of London]

Suggested correction: This story originally creator of the show. It is Netflix. 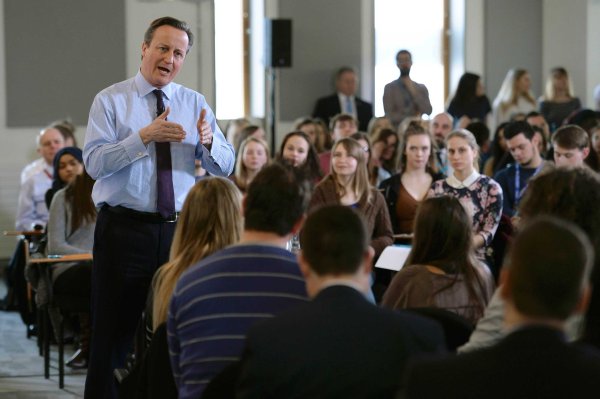 The U.K's European Referendum Is Like a Bad Sequel to the Scottish Independence Vote
Next Up: Editor's Pick