China Accuses the U.S. of 'Militarizing' the South China Sea

U.S. Navy personnel aboard the USS John S. McCain raise their flag during the bilateral maritime exercise between the Philippine Navy and U.S. Navy dubbed Cooperation Afloat Readiness and Training in the South China Sea, near waters claimed by Beijing, on June 28, 2014
Noel Celis—AFP/Getty Images
By Hannah Beech / Shanghai

China has stationed surface-to-air missiles on a contested island in the South China Sea and is expanding its footprint in the waterway through energetic island-building. New runways allow Chinese fighter jets to land on disputed turf, while Chinese fishermen are encouraged by the state to ply waters claimed by five other governments. But on Friday, the spokesperson for China’s National People’s Congress, the legislature that will begin its annual meeting on March 5, placed the blame on the U.S. for escalating tensions in a marine expanse through which more than $5 trillion in trade passes through each year.

“Talking about militarization, if you look into it carefully, the advanced aircraft, warships in and out of the South China Sea, aren’t most of them deployed by America?” said NPC spokesperson Fu Ying at a Friday press conference in Beijing. “America made an important decision, which is deploying over 60% of its navy to the Asia-Pacific region … [The U.S.] is strengthening military deployments with its alliances in the Asia-Pacific region. If we’re talking about militarization, what’s this? Isn’t it militarization?”

In January, the U.S. sent a Navy destroyer through the South China Sea on a so-called freedom of navigation patrol, following a similar excursion last October. The American naval vessels passed within 12 nautical miles of contested islands that China controls. Earlier this week, the U.S. announced that its Navy, along with those of Japan and India, would be conducting joint exercises later this year in waters north of the Philippines. Vietnam and the Philippines have clashed with China over specks of reef and rock in the South China Sea, 90% of which Beijing claims as its own through a nine-dash line that reaches into Southeast Asia. Testifying in Washington last month, the head of the U.S. Pacific Command, Admiral Harry Harris, declared that China was “clearly militarizing” the South China Sea. “You’d have to believe in a flat earth to believe otherwise,” he said.

At the Friday press conference, Fu took another view. “Chinese people think it’s not right for American warships to show off force near South China islands,” she said. “It’s irritating. America once promised to be neutral on the [contested] Nansha islands [which are called the Spratlys in English]. Now the actions and comments from America stimulate [tension]. We have questions about America’s purposes.”

In 2012, the Obama Administration signed off on a rebalancing of U.S. military power toward the Asia-Pacific. Its military presence in the region will be increased by 2020 to 60% of total naval and air forces, as Fu alluded to in her remarks to the press. Despite Washington’s assurances otherwise, Beijing sees the rebalancing as a thinly veiled containment of China. Meanwhile, nations with territorial conflicts with China have cozied up to the U.S., even considering the construction of new American military facilities on Asian soil. “The American government’s stance on the South China Sea is changing,” says Liu Mingfu, a retired colonel in the People’s Liberation Army (PLA) who is a frequent hawkish commentator on military affairs, “from being impartial to being partial, from being behind the scenes to intervening publicly.”

The Chinese position is clear: the U.S. — despite its vows that it only wants to keep the peace, as it has done for more than half a century in the Pacific — is spooked by China’s rise. “With the expansion of China’s military power, China will gradually gain dominance in the South China Sea but America will not tolerate China’s dominance in this area,” says Zhao Chu, another Chinese military commentator. “There is no mutual strategic trust between China and America. It’s a zero-sum game for both countries.”

At the Friday press conference, Fu also announced that China’s defense budget would increase by 7%-8% this year, down from the 10% hike in 2015. Last fall, at a massive military parade, Chinese President Xi Jinping announced that he would be slashing 300,000 positions from the nation’s armed forces by 2017. The pruning is designed to increase the PLA’s efficiency; staff reductions mainly affect noncombatants. Still, China’s military ranks as the world’s second largest, after the U.S.’s. In Djibouti, Beijing is building its first-ever overseas military facility, near the strategically vital Suez Canal. The U.S. and other powers also maintain bases in the Horn of Africa nation.

But it is the much closer South China Sea that matters most to Beijing. After all, 80% of China’s oil imports pass through the waterway. Fishing is plentiful and rumors of underwater oil and natural-gas fields are tantalizing. “All Chinese people have the same opinion: it’s not militarization, we can’t call defense capacity militarization,” said Fu on March 4, referring to global concern about China’s actions in the South China Sea. “If America cares about the peace and stability in the region, please support China to solve the disputes through negotiations, instead of pushing it to the opposite side.” 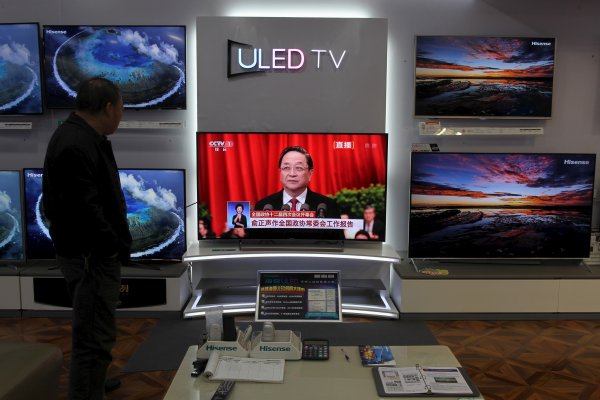