Emily’s List Makes a Push With Millennial Women for Hillary

It’s no secret that Hillary Clinton has been having problems connecting with young people. She herself acknowledges it in speeches, saying that even if they aren’t for her, she’s for them. This is a particularly disconcerting problem for the candidate when it comes to younger women, a key demographic she hopes to turn out in the general election.

Recent efforts to appeal to young women on Clinton’s behalf have not only fallen flat, they’ve done damage. Feminist icon Gloria Steinem and former Secretary of State Madeleine Albright were seen as hectoring millennial women to support Clinton simply because she is a woman herself.

Enter Emily’s List, the largest women’s political group in the country. They are backing Clinton, and in a new push this week, previewed exclusively for TIME, the organization is starting #Sheswithus: a movement of young women online talking about why they support Clinton. The first group of testimonials went live Thursday on Medium.

In the posts, young women talk about their reasons for supporting Clinton and why other women of their generation should do so as well. Some say Clinton better represents minority and women’s voices. Others argue that she is the most capable of getting things done in Washington.

“One of the biggest things for me is yes, Hillary being a woman running for president is a revolutionary idea, but that’s of course not the only reason I’m voting for her,” writes Sanaa A., who describes herself as a Pakistani Muslim liberal Millennial woman from Kentucky. “I’m voting for her because I think she’s someone who is going to be more proactive than reactive about women’s health care and gun control.”

Some of the women try to combat the idea that all Millennials are supporting Vermont Sen. Bernie Sanders, who has pulled the vast majority of young voters even in states he’s lost to Clinton. “As a Vermonter and a progressive, I’m someone who demographically fits the mold of a Bernie Sanders supporter,” writes Kelly B. “But I really believe Hillary’s the candidate who will be able to get us to that progressive end goal. We all want the same things as progressives, but she can get us there and Bernie can’t.”

Julie T., from San Antonio, Texas echoes that sentiment: “I think Bernie Sanders is a good person, but he doesn’t seem to have realistic goals,” she writes. “He wants to start from the bottom, start from zero, and that’s not really possible.”

A few of the women cite Clinton’s long ago past as inspiration for their support, referencing her work on behalf of women’s health and for children’s insurance. “She is way ahead of her time and always has been. I was too young to really remember it myself, but I know now that in the 90s she was ridiculed for being an educated, opinionated, strong woman,” says Leslie A. from Arizona. “But in spite of that, she did her own thing and fought for what she thought was important.”

Single women are such a powerful voting force that if they had voted in the same numbers during the 2014 midterm elections as they did in the 2012 presidential election, Democrats would have won back both the Senate and the House. But they are notoriously fickle voters: Clinton lost women in 16 states to Barack Obama in 2008 on the back of Millennial support.

On Wednesday, Emily’s List’s Super PAC Women Vote! started airing an ad aimed at Millennials. In it, a young woman spots a news story on her smart phone about Texas Sen. Ted Cruz filibustering over Planned Parenthood. She scoffs and texts a friend, “Aww, Hill no!” Voiced over the images, an announcer says: “When politicians tell you what to do with your body, you give ‘em Hill,” referring to Hillary.

A defining trait of Millennials is that they are the first generation born assuming equality of the sexes. Most millennial women believe there will be a female president in their lifetime, and many aren’t convinced it has to be Clinton. In these testimonials, Emily’s List is hoping that a message from fellow young women might win over Millennials to Hillary’s side.

But another Emily’s List sponsored poll might provide more a compelling reason why Millennial women could end up supporting Clinton: a recent survey the organization’s research affiliate American Women did with ELLE Magazine found that 86 percent of single women voters said they wouldn’t vote for someone who called women “bimbos” or “dogs,” even if they agreed with his/her policies. That could bode well for the former Secretary of State if Donald Trump is the nominee. 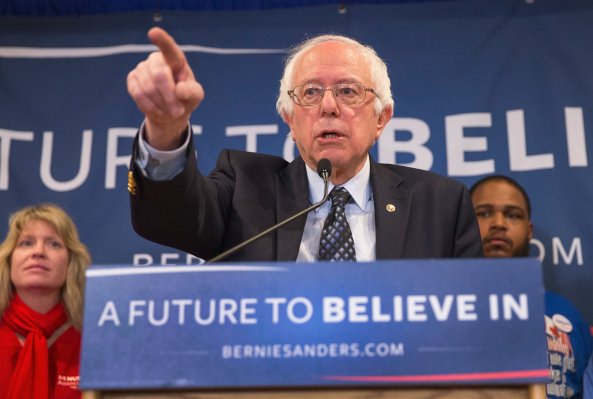 Bernie Sanders-Style Candidates Get Progressive Support
Next Up: Editor's Pick