No. You were not hallucinating. Donald Trump really did use the opening minutes of Thursday’s Republican debate to assure his supporters that he has an adequate penis.

The 2016 race for the GOP nomination has reached peak absurdity. And voters have only been casting ballots for a month.

The four remaining GOP contenders clashed in Detroit in a Fox News forum. From the start, it was clear the pile-on against Trump was going to be the central theme. In recent weeks, Trump’s rivals were lending their voices to the anti-Trump chorus. Mitt Romney and John McCain joined the fray in the hours before the debate.

Trump used the first minutes to respond with typical insult. He dismissed Romney as a loser and brushed off rival Marco Rubio’s criticism. He mocked Rubio for saying he had small hands and suggested it was an implied attack on his manhood.

“Look at those hands. Are they small hands?” he said. “I guarantee there is no problem.”

Trump continued with his typical tone. He called Rubio “this little guy” and twice called him “Little Marco.” Trump bragged about the impact of his Twitter account. He insisted he alone could defeat likely Democratic nominee Hillary Clinton. He dismissed Sen. Ted Cruz of Texas as someone who cannot keep up with his crowds.

It left Rubio shaking his head. “He doesn’t have answers and he’s asking us to make him the President of the United States,” Rubio said.

Cruz, too, was left reeling as Trump promised to torture terrorists, blustered about immigration and bragged about his poll numbers. “Yelling and cursing at people doesn’t make you a tough guy,” the senator said. “We need a President who is rational, not someone who pops off.”

Trump was not cowed. When confronted with his record in business, especially his Trump University, the billionaire interrupted and shouted. It teetered on incomprehensible and decidedly un-presidential.

“Is this the debate you want playing out in the General Election?” Cruz said as Rubio and Trump shouted over each other. “Donald, learn not to interrupt. Count to 10.”

Trump then turned to shout at Cruz, a former Supreme Court lawyer who looked to undermine Trump as a destined-to-fail candidate against Clinton. “He’s been on every side of every issue,” Cruz said.

The business mogul’s rivals also repeatedly confronted him on his shifts on foreign policy, gun rights and even writing checks to Democrats. None of it stuck to Trump, no matter how many times Cruz reminded voters that Trump had on four occasions written checks to Clinton’s campaigns. Trump simply shrugged it off, saying he changed his mind. It was a quick dismissal of the also-ran candidates’ criticism based in policy and record.

As the debate came to a close, Trump’s three rivals were boxed into a corner. All said they would honor a pledge made this summer to support the eventual GOP nominee. It was uneasy, but the trio pledged fealty.

For his part, Trump refused to entertain the idea that he might let the nomination slip through his fingers. But when pressed, he said he would support the GOP nominee, effectively ending speculation that he might run as an independent candidate. But that, of course, can change tomorrow. As with most things Trump, he plays by his own rules.

The debate follows an astonishing one-two punch from the Republican Party’s pair of most recent presidential nominees and an unprecedented effort to derail the party’s leading candidate to join their fraternity.

It was the most open rebuke of Trump and the style of politics that has perhaps given the New Yorker an irrevocable upper hand. It also might have been the day that fully separated the Republican Establishment from the party voters who have delivered Trump wins across the nation.

“If we Republicans choose Donald Trump as our nominee, the prospects for a safe and prosperous future are greatly diminished,” Romney said in Utah, encouraging voters to reject Trump in forthcoming contests.

Shortly after, McCain issued this statement: “I share the concerns about Donald Trump that my friend and former Republican nominee, Mitt Romney, described in his speech today.”

The foreign policy hands, who held senior posts in the administrations of George H.W. Bush and George W. Bush, were more strident. “His equation of business acumen with foreign policy experience is false,” wrote the signatories, which included Ambassadors, Cabinet Secretaries and advisers. “Not all lethal conflicts can be resolved as a real estate deal might, and there is no recourse to bankruptcy court in international affairs.”

The pair joins others in their party in warning that a Trump nomination all but guarantees a Democratic winner. House Speaker Paul Ryan and Senate Leader Mitch McConnell have both said their majorities in Congress cannot link arms with Trump, who at various points has refused to reject an endorsement from the leader of the Ku Klux Klan, has insulted women and has spread incorrect and fear-mongering attacks on minorities, Muslims and immigrants. Many parts of the Republican Establishment have been strident in opposing Trump, but it has not mattered. 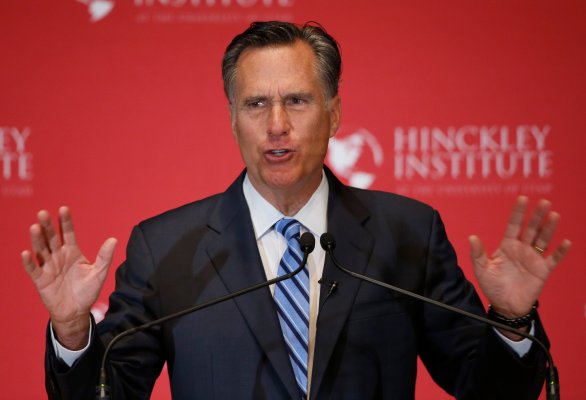 Trump: Romney 'Begged' For My Endorsement in 2012
Next Up: Editor's Pick