In a freewheeling speech Thursday afternoon, Republican frontrunner Donald Trump stumbled into a riff about how great trains are. It’s sad, he said, that the American rail system is so dilapidated while China’s is now slicker than ever.

The line got a laugh—it’s not often that one sees a presidential candidate imitate Thomas the Tank Engine—but it also underscored one of the most solid planks in the billionaire businessman’s rickety policy platform: to fund and rebuild U.S. infrastructure, including its crumbling railways.

The thing is, that’s usually a Democratic talking point.

President Obama spent the better part of his second term pushing for a $478 billion infrastructure bill to fund roads, bridges, and rail lines. Before that, Obama and Vice President Joe Biden, who at one point practically moonlighted as Amtrak’s spokesman, pushed a new U.S. Department of Transportation initiative awarding $8 billion to states to build new high-speed intercity rail.

“[T]here’s no reason why Europe or China should have the fastest trains when we can build them right here in America,” Obama announced in a 2010 statement.

“By investing in high speed rail, we’re doing so many good things for our country at the same time,” Biden added. We’re creating good construction and manufacturing jobs in the near-term; we’re spurring economic development in the future; we’re making our communities more livable—and we’re doing it all while decreasing America’s environmental impact and increasing America’s ability to compete in the world.”

“Our airports, bridges, water tunnels, power grids, rail systems—our nation’s entire infrastructure is crumbling, and we aren’t doing anything about it,” he wrote in his 2015 book, Crippled America. He went on to promise that fixing it would spur economic growth.

“These projects put people to work—not just the people doing the work but also the manufacturers, the suppliers, the designers, and, yes, even the lawyers. The Senate Budget Committee estimates that rebuilding America will create 13 million jobs,” he wrote. Which, incidentally, was Obama’s point in 2011, when Congressional Republicans blocked his $60 billion infrastructure jobs bill.

Republicans have generally fought efforts to increase federal spending on principle. That includes vast infrastructure projects, even popular ones. In the hours after the deadly Amtrak derailment in May 2015, for example, the Republican-led House Appropriations Committee voted to slash the rail budget by 20%.

In December, a bipartisan group of lawmakers in the House and Senate joined to pass a less sweeping $305 billion version of the infrastructure package. But both of Trump’s top rivals for the Republican nomination, Sens. Marco Rubio of Florida and Ted Cruz of Texas, voted no on the bill.

In a nod to the fiscal conservative tradition of the Republican Party, Trump has admitted that rebuilding American infrastructure would cost taxpayer dollars. But then waved away the concern with Trumpian bravado.

“On the federal level, this is going to be an expensive investment, no question about that. But in the long run it will more than pay for itself,” he said. “It will stimulate our economy while it is being built and make it a lot easier to do business when it’s done—and it can be done on time and under budget.” 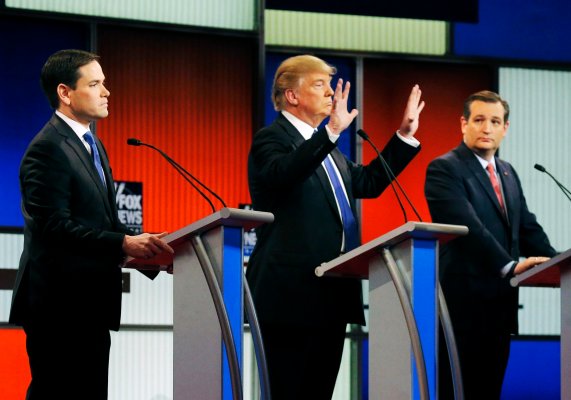 Everyone Vs. Trump
Next Up: Editor's Pick