Trump: Romney 'Begged' For My Endorsement in 2012

In a wide-ranging speech, Republican front-runner Donald Trump hit back at Mitt Romney Thursday, criticizing him as a failed candidate who had “begged” for his endorsement in the 2012 presidential campaign.

Speaking at a press conference in Portland, Maine, Trump argued that Romney was a “choke artist” who lost the third presidential debate, disappeared from the campaign trail and was defeated in a winnable race against President Obama.

“Mitt was a disaster as a candidate,” he said. “He let us down. He should have won.”

Trump was responding to a hard-hitting and unprecedented speech earlier in the day at the University of Utah in which Romney called him “a phony, a fraud,” arguing that he did not represent the true values of conservatism.

He then went on to note that Romney sought his endorsement in the 2012 primary, coming to Trump Tower for a private meeting. He said that in the closed-doors meeting Romney “begged” for his support.

“I could have said, ‘Mitt, drop to your knees,’ he would have dropped to his knees,” he said. “He was begging me.”

The back-and-forth between the previous nominee and the presumptive front-runner came in the midst of a last-ditch effort by the Republican establishment to prevent Trump from securing the nomination before the convention in Cleveland. 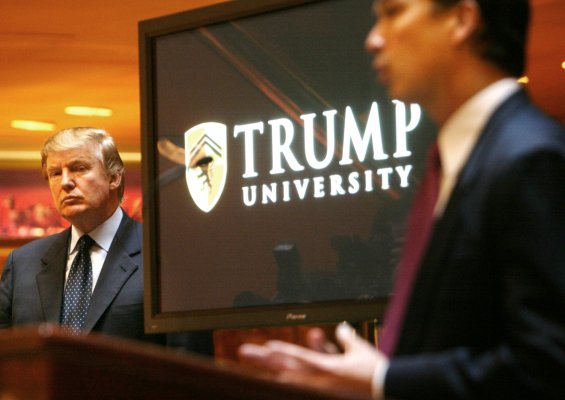 Trump's Defense of 'University' Relies on Shaky Math
Next Up: Editor's Pick