Ben Carson Drops Out of Race, Announces His Next Steps

Ben Carson’s appearance at the Conservative Political Action Conference in Washington, D.C. on Friday was a call to arms for faith voters, but also a concession that he can no longer be their candidate.

“You know, there’s a lot of people who love me, they just won’t vote for me,” Carson quipped when he told the audience he would be “leaving the campaign trail.”

Carson has still not officially said they he is suspending his campaign, but the crowd gave him a standing ovation as he announced his next step: to get involved with My Faith Votes, an organization focused on getting Christian voters to the polls. According to Politico, Carson will serve as national chairman of the organization.

Carson previewed the end of his unlikely and unusual campaign on Wednesday when he announced that he would be skipping the Republican debate in his hometown of Detroit the following night, and that he saw no “political path forward” in the race. Carson did not win a single state, and gathered only 8 delegates out of the more than 600 that have been awarded so far.

But here’s the thing about Ben Carson: he never wanted to be President anyway. The former neurosurgeon with the inspirational life story was pushed into the race after he spoke at the National Prayer Breakfast in 2013 and criticized the Affordable Care Act while standing feet away from President Obama.

“Lord you know I don’t want to do this, but if you open the doors I’ll do it,” Carson told TIME of his prayers about whether to become a candidate.

At first, Carson’s candidacy seemed charmed. The mild-mannered doctor briefly captured the national spotlight and even rose to the top of the polls in the fall. But then his campaign began to fall apart.

He bungled words, calling the terrorist group Hamas something that sounded more like “hummus.” The New York Times ran a story quoting a Carson adviser as saying, “Nobody has been able to sit down with him and have him get one iota of intelligent information about the Middle East.” The Carson camp disputed the story, but it had already played into the narrative that Carson was out of his depth on foreign policy.

At the same time, the Carson campaign itself was in turmoil. In December, communications director Doug Watts and campaign manager Barry Bennett both resigned, bitter about the outsize influence that a divisive adviser named Armstrong Williams was having on Carson. (“I think they need some psychologists to figure that out,” Bennett told TIME of Carson’s relationship with Williams.)

There were also issues of finances. Carson’s campaign had always been remarkably successful at raking in small dollar donations, but concerns arose in late December about how that money was being managed, with most of it being put back into more fundraising. The Washington Post reported at the time that critics were calling Carson’s campaign a “rat hole” for those small donations.

All of this conspired to a disappointing finish for Carson when the first votes were cast. He came in fourth in Iowa with 9.3% of the vote; Florida Sen. Marco Rubio, who came in third, was far ahead of Carson with 23.1%. Carson nabbed three delegates in Iowa, and those would be the only three he would pick up from any state.

Now the question is who Carson’s voters will break for. Carson was consistently polling around 7% in national polls, so if his supporters move as a bloc, it could be a boon for another candidate. Each of the three top contenders holds a certain element of Carson’s candidacy that could appeal to his supporters: Texas Sen. Ted Cruz is strongly anchored in his faith, Florida Sen. Marco Rubio has a nice-guy demeanor and businessman Donald Trump is another outsider to the political system.

According to an analysis done by TIME Labs, Carson’s Twitter followers are most likely to also follow Trump, then Rubio. And an Elon University poll of second choices also showed most Carson supporters would defect to Trump if Carson dropped out of the race, though the question was asked only of likely North Carolina Republican voters.

Trump himself seemed eager to capitalize on the opportunity, tweeting Thursday morning, “Will miss @RealBenCarson tonight at the #GOPDebate. I hope all of Ben’s followers will join the #TrumpTrain. We will never forget.”

Speaking Thursday to Yahoo’s Katie Couric, Carson said that was a decision his followers would have to make on their own. “I would say please look at the policies of each one of the candidates and see which ones really align well with your thinking,” Carson said, but wouldn’t say which candidate he thinks would be the best choice. “I truly believe in people’s intellect and their ability to assess the situation and make that decision for themselves.”

For now, Carson says through his new capacity with My Faith Votes that he “will still continue to be heavily involved in trying to save our nation.”

He told Couric he would also return to the speaking circuit and writing books. And maybe he’ll be able to relax a bit, too. He told TIME that he’s always wanted to learn how to play the organ, and he’s fond of saying on the stump that he was looking forward to retirement so he can catch up on movies. In his speeches, he frequently mentions he’s never seen the classic boxing film “Rocky.” Now he has the time. 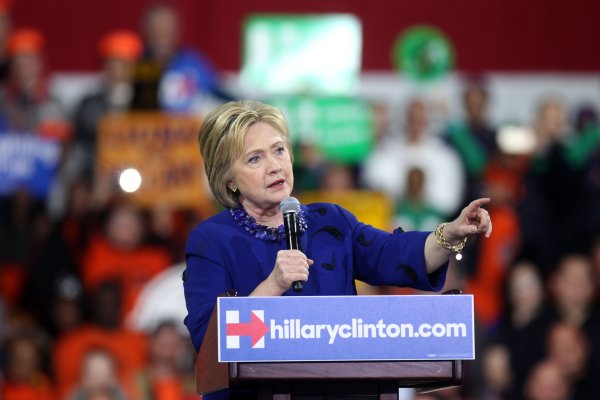 Hillary Clinton Hits Populist Notes in Pitch to Michigan
Next Up: Editor's Pick