As the Amazon Echo smart speaker is establishing itself as a surprise hit, Amazon is adding two new similar devices to its hardware lineup.

How much do they cost?

What’s the difference between them?

About the size of a hockey puck, the Echo Dot is basically a miniature version of the larger Echo. Like the Echo, it comes with Amazon’s voice assistant, Alexa. Through Alexa, Echo Dot users can ask questions, get the latest headlines, control smart home devices and more. It can also be used on a bedroom nightstand as a smart alarm clock.

Unlike the larger Echo, however, the Dot isn’t meant to be used primarily as a high-quality speaker. It can be connected to speakers or stereo systems via Bluetooth or with a cable, however, letting users stream music from services like Spotify and iHeartRadio.

The Amazon Tap, below, is an Alexa-enabled portable speaker that’s meant to be taken to places like the backyard or the beach. Unlike the Echo and Echo Dot, which listen for a “wake word,” Tap users need to press a microphone button on the device before speaking a command. The Tap is also the only battery-powered device of the three; Amazon says it has nine hours of playback time. It can stream music from your mobile device via Bluetooth or from streaming services via Wi-Fi.

How do I get them?

The Amazon Echo Dot, which ships on March 31 and can be preordered today, is only available through Alexa. This means you can only order the Dot if you already have an Echo or Amazon Fire TV by saying something like, “Alexa, order a Dot.” Amazon also says the Dot is available in limited quantities and you must be a Prime member to order the device.

The Amazon Tap will be available on the company’s online store when it launches on March 31, but you can preorder the speaker now. 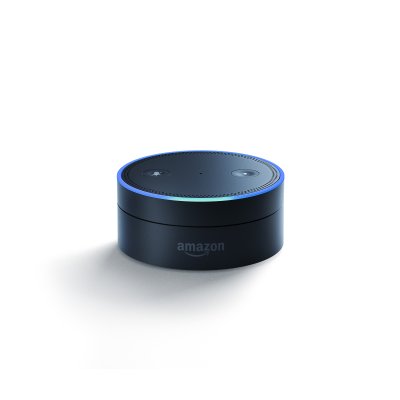