Security personnel march in front of Tiananmen Gate as the area near the Great Hall of the People prepares for upcoming annual sessions of the National People's Congress and Chinese People's Political Consultative Conference in Beijing on March 2, 2016
Damir Sagolj/Reuters
By Charlie Campbell / Beijing

The “two sessions,” as they are colloquially known in China, are an important bellwether for assessing government policy in a one-party state where most decisions take place behind firmly closed doors. Around 3,000 provincial administrators, top businessmen and Chinese Communist Party (CCP) bigwigs are expected to attend.

“The NPC is where the senior leadership showcases its policy intent for the year,” Nicholas Consonery, a China expert for the Eurasia Group analyst firm, tells TIME. “It’s basically the entire class of China’s political elite convening in Beijing for the next few weeks.”

1. Can we expect a raft of big announcements?
Not exactly. President Xi Jinping is the China’s paramount leader, and arguably the most powerful Chinese figure since Mao Zedong. Most national-level decisions are ultimately taken by Xi with help from the CCP executive branch, whose power is centralized in the Politburo Standing Committee. However, the Two Sessions provide an opportunity for provincial administrators and politicians to congregate in Beijing and mediate on various aspects of policy. The NPC does vote on some legislation, but the primary function is simply to approve the annual budget and various government reports.

2. So this is just a rubber-stamping exercise?
Yes and no. While we are very unlikely to see any real debate or discussion of executive policy at the Two Sessions, the meetings do reveal government priorities for 2016. Under the current fiscal climate, this is helpful for investors looking to gauge how Beijing plans to manage economic growth. It is even more important this year with China’s 13th Five-Year Plan to be announced in the fall. This clutch of documents will basically chart the course for almost the entirety of Xi’s remaining term in office.

3. What are the hot topics?
After three weeks of bright blue skies, Beijing’s chronic smog returned Thursday as CPPCC delegates took their seats, and you can bet that pollution will be high on the agenda. The economy will also be a major focus, particularly regarding overcapacity in key industries such as steel production and coal power. Both overcapacity and pollution featured prominently at the smaller 32 regional meetings that immediately preceded the Two Sessions, and were even subject to binding commitments in about a dozen key provinces. As a result, analysts expect up to 6 million workers to be laid off in state-owned industrial enterprises through 2019. The challenge will be how to address pollution and overcapacity without sacrificing growth.

4. So it is mostly about economics?
The meetings also provide a glimpse into opaque Chinese institutions that are otherwise often difficult to fathom. The Chinese People’s Liberation Army (PLA), for one, is in a period of transition, undertaking efforts to restructure the institution into something more akin to a modern, integrated military. Despite Beijing’s persistent saber rattling in the South China Sea, around 300,000 troops have so far been discharged from the 3 million-strong army, with a streamlined force of around 2 million thought to be the end goal. The Two Sessions will be rare chance to observe how these reforms sit with some of PLA top brass.

5. What should we look out for?
The key event is likely to be Premier Li Keqiang’s “work report,” which is delivered on the opening day of the NPC. This will contain his economic growth forecast for 2016, with media reports suggesting 6.5% to 7% will replace last year’s target of “about 7.0%,” which Li famously described as the “new normal.” Financial analysts also say an increased budget deficit target would make a great deal of sense. “A looser fiscal stance is an effective way to support the economy at a time when growth remains a concern, particularly in an environment of worries about bad debt and excess credit growth,” says Capital Economics analyst Mark Williams. The Two Sessions are also a valuable opportunity to pick out who are the up-and-coming figures in the higher echelons of the CCP. 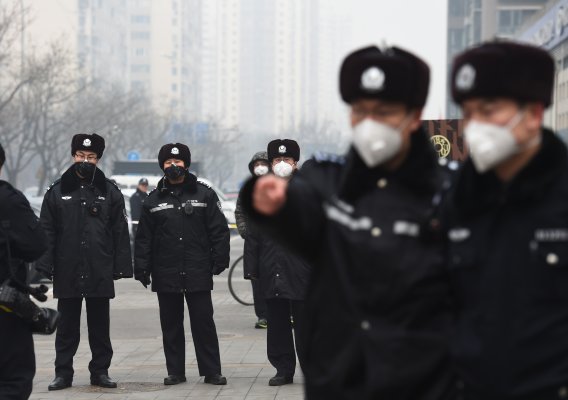 Chinese Activists Demand Release of Lawyers
Next Up: Editor's Pick