The Republican presidential candidates tried to destroy Donald Trump on his business record and his many political shifts. They attempted to cast him as a con man or too profane to represent the Republican Party. They tried to match him insult for insult, only to find the billionaire was simply too good at the counterpunch.

In the end, Trump’s remaining rivals for the Republicans’ presidential nomination just hurt themselves. That left them beginning Thursday as a date that might as well be called the Great GOP Intervention of 2016.

The day was set to begin with 2012 nominee Mitt Romney urging the party, in a speech scheduled in Salt Lake City, to get serious about the campaign and think about what qualities they wanted in their front-man in 2016. (Romney was not scheduled to endorse or enter the race himself, advisers told TIME.) It was set to end in Detroit, where Trump’s three remaining challengers will debate him on Fox News. It was perhaps the most pressing day yet for anti-Trump efforts to date.

“So long as the field remains divided, Donald Trump’s path to the nomination remains more likely,” Texas Sen. Ted Cruz told supporters on Tuesday, a night that saw him with his second, third and fourth state. “And that would be a disaster for Republicans, for conservatives and for the nation.” It was a preview of his appeal to Republicans to consider the arithmetic of Trump’s delegate-grabbing operation.

Florida Sen. Marco Rubio, too, is getting in on the political question facing Republicans: Can they stand another Clinton in the White House? “You know our country. You know your neighbors. You know your family, and you know your friends,” he said this week in Georgia. “Do you think they’re going to vote for someone with a record like his? They’re not. That means we’re going to lose. That means the winner of this election will be Hillary Clinton.”

But these efforts are perhaps too late. Voters on Tuesday participated in the closest thing to a national election the United States will see before November’s Republican-versus-Democrat general election. Vast swaths of delegates to the GOP’s nominating convention in Cleveland have been spoken for. And while Trump has yet to secure enough of those delegates, it is becoming tougher and tougher for any of his rivals to overtake him; he won 7 of the 11 states that went this week and his train has plenty of track to go.

That has left strategists for the three remaining candidates—Cruz, Rubio and Ohio Gov. John Kasich—locked in a de facto gentleman’s pact to deny Trump enough delegates to win outright in Cleveland. Cruz is eyeing states where he could fare well with tea party-minded activists, Rubio is looking at places where he could remind Establishment-minded Republicans that Trump would be a disaster for them, and Kasich was trying to cobble together a map for Midwesterners looking for a sensible Governor.

When they meet on stage on Thursday night at the Fox Theater in downtown Detroit, each will be looking to present their own appeal to GOP sobriety. Audiences started seeing that in their speeches ahead of Super Tuesday, and strategists are honing language and fundraisers are cobbling together advertising budgets before the next big day of voting on March 15.

If these candidates—and their allied super PACs and anti-Trump groups operating on the fringes—are to be successful, that has to come together in the next two weeks. On March 15, these also-rans lose out on the chance to collect delegates here and there with second- and third-place finishes. On March 15, the contest’s rules shift to winners collect all the delegates and everyone else departs the states with zero.

Trump nodded to the rules shift during an unusual press conference this week at his seaside compound in Palm Beach, Florida. “This isn’t like it’s a close match. I mean, it’s only too bad that winner didn’t take all, because if winner took all, this thing is over,” he crowed. Not quite, but the days of Trump splitting the spoils with his rivals are coming to an end.

That means these candidates need to get their message sharper and more urgent, especially during debates where less-informed voters get perhaps their only look at the rivals. And these low-information voters tend to go with what they recognize from TV.

One adviser to an anti-Trump group blamed the candidates for not taking stronger attacks against him in the first month of voting—or earlier—and said their latest efforts rest in the byzantine system political parties use to pick their nominees.

These aides, however, acknowledge, they’re not going to sink the S.S. Trump. Taking out a candidate in such a short period of time is almost impossible, especially one who has proved time and time again that the typical rules of politics do not apply to him. Here is a thrice-married New York billionaire real estate tycoon who makes jokes about Communion wafters and talks with locker-room language who won the heavily devout South Carolina primary. Attack ads against his temperament or record have so far shown ineffective. Voters like him because he’s a bully, not despite it.

These anti-Trump activists and donors are hoping they can convince just enough voters in the next two weeks not to give Trump blowouts, but rather hold his numbers low enough to keep him from hitting the magic number to treat Cleveland as a coronation. The donors, in turn, are telling the campaigns to get smarter about their strategies. Seldom does a donor call without advice, one campaign manager said dryly.

But these donors aren’t wrong. “What we’ve been doing hasn’t been working,” conceded one top adviser to a Trump rival. “Doing it again would the definition of insanity.” From another camp came this assessment: “We cannot beat him at his game. (But) if we can play to a draw, we get to try again, in Cleveland.”

And that’s really what this campaign has become: trying to give the GOP time to clear the haze and get serious in time for Cleveland’s convention. If Trump fails to get the requisite number to win on the first count, then every delegate—even Trump’s—can switch allegiances on the following ballots. Each of those party insiders suddenly becomes a free agent, open to negotiating any sweetheart deal they want with any campaign.

Both Rubio and Cruz think they could peel off support on those subsequent ballots, especially with the news on Wednesday that retired neurosurgeon Ben Carson was effectively bowing out of the campaign. First, though, the survivors have to force the second round of balloting in Cleveland. “None of this matters if Trump wins on the first ballot,” said a debate coach for a vanquished foe. “For this to work, they need to leave his ship stuck at sea. They cannot let him find a dock.” 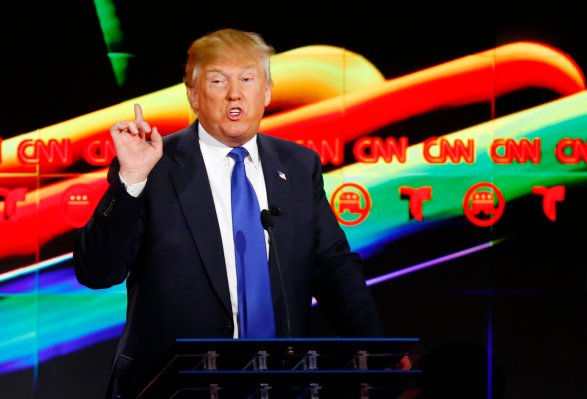 Why Attacking Donald Trump Doesn't Work
Next Up: Editor's Pick