7 Things to Know Before You Visit Cuba

On March 21, President Obama plans to make a historic trip to Cuba, a country that is physically closer to the U.S. than Cincinnati is to Columbus—and yet for decades has felt a world away, courtesy of an embargo that parted the Cuban and American peoples for more than five decades. Soon after Obama, American tourists will be able to make similar journeys. In December, U.S. and Cuban officials reached a preliminary agreement to resume direct commercial flights, and the likes of American Airlines has said it hopes to provide service to that island before summer vacation.

I made this trip last year with my husband, who is also a journalist, which meant that we could both visit Cuba without prior permission soon after Obama began softening diplomatic relations in early 2015. The small print was that we needed to be involved in journalist activity and so we were, in the most meta of fashions: we researched honeymooning in Cuba while honeymooning in Cuba, something that many couples will doubtless be considering once they can book Miami-to-Havana flights with a couple clicks. But we learned plenty of lessons, often times the hard way, that will be helpful for any novice who wants to venture into a that faraway land just 90 miles south of Florida.

Take someone with you who speaks Spanish and make everyone study up a little before you go. When you’re in Havana, particularly hot tourist centers like the part of the city known as Old Havana, you can get by with English. But if you want to travel beyond those parts of Cuba that cater to money-hemorrhaging foreigners, English is no longer a lingua franca. And, though we had several locals treat us as marks (including a couple who used a woman’s pregnancy to beg for a ride, then directed us in circles while trying to get into our bags), the best part of the trip was the Cuban people. We indulged our fascinations in one another over daiquiris or during Friday nights lounging on the Malecón. Make sure to hit that famed sea wall, where locals flock every weekend, for a sunset.

A street scene at the Maleconv in Havana, Cuba, Feb. 23, 2015.
Sebastian Liste—NOOR/Redux

Brush up on your map-folding skills. We also needed Spanish to be able to ask directions when we got lost, which we did over and over again, especially outside Havana when traveling to places like old port town Cienfuegos and valley of Viñales (both are worth a visit). In many ways, going to Cuba feels like going back in time. It’s not just because of the classic cars. There’s also the lack of infrastructure. Beyond the capital, you’re as likely to see a young, shoeless boy in a tattered, second-hand Nike shirt driving an horse-drawn cart full of sugar cane as you are to see clear signage when you need it. While some mobile carriers are coming out with plans that allow you to use your smartphone in Cuba, you may well be stuck with paper maps. And I’d recommend leaving the phone off anyway: going screen-less is not only a great respite but gives you a taste of what it’s like to live in a country where, according a recent World Bank estimate, 7 out of 10 people do not use the Internet.

A boy drives a horse-drawn cart full of sugar cane on a road southeast of Havana, Cuba, May 2, 2015.
Katy Steinmetz for TIME

Bring way more cash than you think you need. Though change is likely on the horizon, credit cards and ATM cards issued by U.S. banks still do not work in Cuba. Though you can do many parts of this trip on the cheap, it’s easy to spend way more than you planned, and tourists are often charged a premium. (In fact, locals and foreigners use different money. Visitors use convertible Cuban pesos—or CUCs—pronounced “kooks.”) Our cautionary tale: after a large, unanticipated deposit for our car rental, unexpectedly big hotel bills and so forth, we ran out of cash halfway through a journey to the secluded beaches at Cabo San Antonio. While reduced to eating bread out of our glove box (amid glorious sunsets and white sand), we found our only resort was to pay a Canadian company a hefty fee to set up a sketchy credit-for-cash deal executed by “the guy who runs a bike rental shop” back in Havana. You can take dollars or Euros, so take plenty. Big hotels will exchange them for local currency and few locals will turn down a $20 bill in a pinch.

A beach at the secluded western end of Cuba, in Cabo San Antonio, May 28, 2015.
Katy Steinmetz for TIME

Embrace your sense of adventure and get off the beaten path. Doing this trip on our own was challenging—and that was a great part of its romance. We were constantly solving problems and doing without things, which both made us a team and deeply grateful for any comfort. You could go to Cuba and be on a group bus tour where most decisions are made for you. Or you could hire a guide and hole up in Havana’s Hotel Saratoga for $300 a night. There you can be (relatively) pampered and lounge at a rooftop pool, rest above it all and watch the Cubans and old Caddies swirl around the Capitol. From high up, you can see that, far off, the bright-colored facades of grand old colonial buildings mask crumbling poverty in the rooms behind them. You could also spend a couple nights in that hotel and make an effort to visit that part of Cuba behind the façade on your own.

The Buena Vista Social Club performs for tourists at a government-run brewery in Havana, Cuba, May 1, 2015.
Katy Steinmetz for TIME

Get to know this symbol.

One fantastic way to do that is staying in casa particulares, which are like B&Bs that Cuban people run out of their homes and tend to cost about $30 a night. There’s no need to book in advance. Just find a building marked with that sign, knock on the door and secure a room. It’s a fine way to meet Cubans and other travelers, while also having your own bedroom and shower. While the country lacks many of the day-to-day products and foods that Americans take for granted, a stay in a casa particular will likely come with the option of a $5 breakfast packed with more fresh, tropical fruit than you’d get at any continental breakfast in the U.S. And though you won’t see many ships in the waters beyond the Malecón—an eerie absence that reminds you how different government control and lifestyles are here—you can get lobster on the cheap, especially in those seaside towns like Cienfuegos.

Things you should consider packing:

We also packed our own snorkel gear so that we could stop anywhere, like on the gorgeous drive along the Bay of Pigs, and hop right into the blue Caribbean, which is lousy with frantically-poke-your-snorkeling-partner flora and fauna. And stock up on bottled water when you get there.

Waters popular for snorkeling in the Bay of Pigs, or Bahia de Cochinos, Cuba, May 2, 2015.
Katy Steinmetz for TIME

Optional for literary or cultural nerds: brush up on your Hemingway. Tired one night, my husband and I bought one of many easy-to-find copies of the Old Man and the Sea, and just read it to each other out loud. Ernest Hemingway’s ghost looms large in Cuba, a country where he wrote and swilled so feverishly that the most famous bar—Havana’s El Floridita—has a statue of him permanently perched at one end. You can visit his home, a ranch called Finca Vigia, where its hard not to envision him entertaining drunk and profound salons before setting adrift the next morning on his boat, Pilar (it remains on display today).

The famous bar, El Floridita, seen on May 5, 2015, claims to be the "cradle of the daiquiri."
Katy Steinmetz for TIME

Do go to El Floridita, even if it’s as tourist-y as the destinations get. Ideally go while locals are playing live music—like they do, joyously, nearly everywhere, all the time. And then try ordering a Papa Doble, Hemingway’s drink: shaken and not blended. It may not be on the menu but it was a Hemingway staple, and there are few better feelings than sipping one after slipping out of the heat and onto a barstool in a country that will probably change beyond recognition as all the blockades come down. 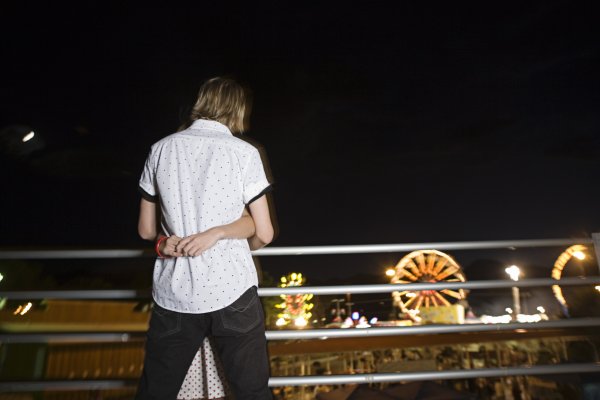 How to Tell if Your Teen Daughter's Relationship is Unhealthy
Next Up: Editor's Pick