The police chief of Baltimore City Public Schools has been placed on administrative leave after a video surfaced showing an officer slapping and kicking a young man at a school.

The officer in the video has also been placed on leave as school officials investigate the case, the Baltimore Sun reported, citing a school spokeswoman.

The video of the altercation between the officer and the young man was filmed with a cell phone on Tuesday at REACH Partnership School in East Baltimore and posted to Facebook, according to the newspaper. It is not yet clear if the young man is a student at the school, and it’s also unclear what preceded the filmed incident.

The incident comes after a year when the police’s actions against members of the black community sparked protests across the country.

“Anytime there is a law enforcement officer with that level of authority that seems to be abusing that authority, it impacts all of us across the country,” Baltimore Mayor Stephanie Rawlings-Blake said on Wednesday morning, according to the Baltimore Sun. “It certainly is not helpful as we work to build bridges of trust to see that level of mistreatment.” 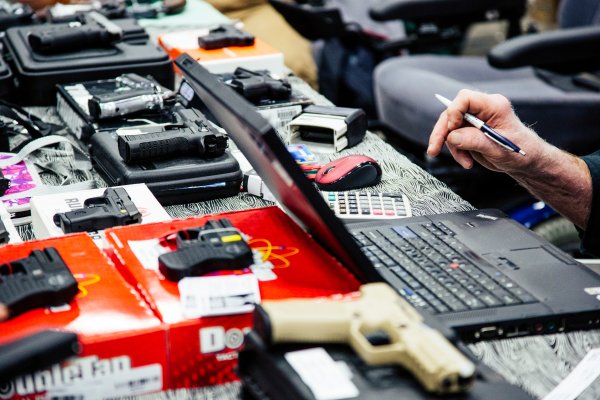 Gun Background Checks Spike in February
Next Up: Editor's Pick