Democrats may not exactly be feeling the “Bern” for Hillary Clinton, but the prospect of a Donald Trump presidency is creating more than enough energy to make up for it.

The former Secretary of State may have been helped on Super Tuesday by Trump’s strength. One Massachusetts senior statesman told TIME that he thought his state swung to Clinton, where she won by one point after losing neighboring New Hampshire by more than 20 points in January, because voters wanted the best counter possible to Trump’s candidacy.

“Trump fires up our folks and he really does unify our party,” said a senior Clinton campaign official. “The unification in the Democrats party, versus the other side, has already started.”

Some are downright eager for a Trump nomination. “If Trump moves into the general election with his misogynist anti-immigration hate-based racist message, I don’t think that’s going to work with an electorate that’s pretty diverse,” says Buffy Wicks, former head of Clinton’s Super PAC Priorities USA. “If you look at the 1980 election, the non-white vote was 12 percent, it’s now 28 percent and it’s only growing. Those demographic shifts don’t bode well for Trump and the kind of message that he’s currently promoting.”

Others are watching with undisguised schadenfreude. “The Republican establishment acts like it is surprised by Trump,” Senate Minority Leader Harry Reid said on the floor of the Senate Wednesday. “Republicans created him by spending seven years appealing to some of the darkest forces in America. Now, it is up to Republicans to try and undo what they have done by denouncing Donald Trump. It’s time for Republicans to stop the Frankenstein they created.”

Conventional wisdom dictates that Trump has little chance of winning in the general election. Winning Republican primaries on the backs of largely white male support is entirely possible, as Trump has proven. But winning a general election takes expanding that appeal to groups Trump has alienated: Latinos, African-Americans, women and even veterans.

“Donald Trump has selfishly championed his own interests at the expense of everyone around him—workers, women, and people of color, just to name a few. He has repeatedly made sexist and offensive comments about women, and has a history of flying off the handle, which isn’t the temperament we need in a commander in chief,” says Guy Cecil, who heads Priorities USA, with a war chest of nearly $100 million. “We already know that Republicans are preparing a billion-dollar campaign to deceive and distort Hillary Clinton’s record so we will be ready to draw the contrast between her and Trump or whoever emerges.”

And Trump’s unpredictability has enabled him to captivate news cycles in ways never seen in politics. Relatively speaking, he’s hardly had to spend any money on campaign ads because he gets so much free news coverage. “What I’ve been concerned about his ability to dominate the news cycle and shape it,” says David Brock, who runs several outside PACs supporting Clinton. “He is totally on offense 24/7. His ability to do that is of some concern.”

The Clinton campaign says they are taking Trump very seriously from the get go—they won’t underestimate him the way the Republican field did. They’re looking to see if he expands or changes the electorate from traditional blue states and red states, according to campaign officials. And they have decided to draw the sharpest contrast possible: Clinton will remain unrelentingly positive—think Ronald Reagan’s “Morning in America”—while leaving the attacks on Trump to surrogates, including her husband, according to Clinton campaign sources. Clinton, to borrow a phrase from George W. Bush, will be “a uniter, not a divider.”

But love him or hate him, the general election is looking less to be about Clinton or the status quo but votes for or against Trump.

With reporting by Sam Frizell in Washington. 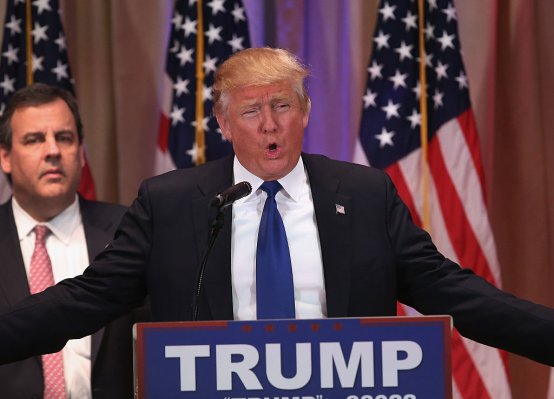