The theoretical question of whether the U.S. military would obey illegal orders from a potential President Trump got a lot less theoretical with his recent string of wins.

“If I say do it, they’re gonna do it,” GOP presidential candidate Donald Trump said during Thursday night’s debate in Detroit. “That’s what leadership is all about.”

But late Friday, Trump was back-pedaling. “I will not order a military officer to disobey the law,” he told the Wall Street Journal. “It is clear that as President I will be bound by laws just like all Americans and I will meet those responsibilities.”

Trump’s chest beating about how he would handle ISIS and other terrorists has generated ripples of concern in military circles. That’s because when it comes to giving orders to the U.S. military, Presidential powers are circumscribed, not only by the laws passed by Congress, but by the policies, regulations and traditions of those charged with carrying out those commands.

“The military officer belongs to a profession upon whose members are conferred great responsibility, a code of ethics, and an oath of office,” Marine Lieut. Colonel Andrew Milburn wrote in a Pentagon scholarly journal in 2010. “These grant him moral autonomy and obligate him to disobey an order he deems immoral. … Indeed, the military professional’s obligation to disobey is an important check and balance in the execution of policy.”

Two of Trump’s military pledges highlight the limits of a commander-in-chief’s power. One, involving stepped-up interrogation techniques that would include but also go beyond waterboarding, could be a gray zone where the government’s lawyers who rule on such things might disagree among themselves. The second—hunting down and killing the relatives of terrorists—is a black-and-white case that the U.S. military’s lawyers would refuse to sanction, and its troops to carry out.

Defense Secretary Donald Rumsfeld authorized such so-called “enhanced interrogation techniques” that went beyond those allowed by the Army’s interrogation manual in the wake of the 9/11 attacks. Congress barred such techniques in 2005, and did so again in October. But government lawyers—especially civilian appointees—can always try to justify legally whatever their President wants them to justify.

“Any democracy has to be concerned about the kind of civil-military crisis that could arise if its armed forces comes to doubt the lawfulness of the orders its being given,” says Charlie Dunlap, a retired Air Force judge advocate general now teaching at Duke Law School. “You don’t want the military thinking it has to constantly question and second-guess the legality of every order being given by the commander-in-chief.”

The logic of Trump’s call is clear: use the threat of death against terrorists’ families as a crowbar to change the terrorists’ behavior. So, ironically, is its legality: “Any order to specifically target civilian family members who are not directly participating in hostilities is simply a nonstarter for today’s military,” says Dunlap, who says he has no public opinion on any candidate. Such a command, he adds, would be a “classic example of an illegal order that could not and would not be obeyed.”

If legalities don’t stay the hand of a President Trump, perhaps the prospect of impeachment might. “Whether giving such orders would constitute a high crime or misdemeanor and thereby expose Mr. Trump to impeachment is another matter,” says Eugene Fidell, a lecturer at Yale Law School and former president of the National Institute of Military Justice. “Assuming he lacks political support in Congress, I wouldn’t rule it out. If he does so on Day 1, it could be a very short presidency.”

There is, of course, a yuge difference between pursuing unwise, as opposed to illegal, policies, when it comes to issuing orders to the U.S. military. Since 9/11, the U.S. has conducted far more unwise than illegal actions. But as Trump moves closer to winning the Republican nomination, it will be worth watching to see if he backs away from his illegal pledges . If not, he will join a long list of Presidential candidates making promises they can’t keep once elected. 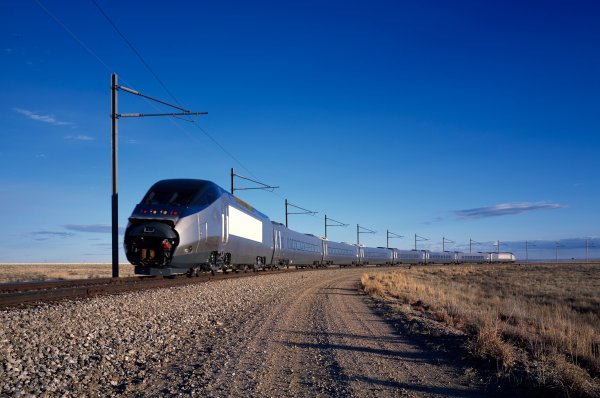 Trump Agrees With Democrats on High-Speed Trains
Next Up: Editor's Pick