Donald Trump racked up wins across the country Tuesday, but the billionaire’s rivals won just enough to justify staying in the race, keeping hope alive among anti-Trump Republicans that they could still find a way to defeat him.

On the biggest night of the campaign so far, Trump carried at least seven of the 11 states that weighed in on the race. Ted Cruz carried Oklahoma and his home state of Texas, a must-win contest that might have ended his anti-Washington crusade.

Meanwhile, Marco Rubio logged a victory in Minnesota, his first. The barest dodge of a Trump sweep—even when he didn’t win he placed in a strong second place—left his rivals with reasons to stay in a race that is shaping up to be a slog rooted more in arcane GOP rules than victories.

The complicated delegate math meant that Trump’s various competitors combined could yet prevent him from reaching the threshold needed to win the nomination. But the path forward for the anti-Trump wing of the GOP looks increasingly tricky—and ugly—dependent on a contested convention, something not seen in the modern era.

After months of searching for a Trump alternative to coalesce around, the GOP has found solace in numbers, with its divided field of candidates camping out in individual states where they can pick off delegates and perhaps embarrass Trump. As a whole, they are betting on playing the role of collective spoiler. Take Ohio Gov. John Kasich, a footnote to Super Tuesday who has decided to set up shop in Michigan, which votes on March 8, and his home state, which casts ballots on March 15. He largely ignored the March 1, and, consequently, voters largely ignored him.

Retired neurosurgeon Ben Carson, meanwhile, vowed to continue his campaign that has not yet seen a single win. Instead, he has invited his rivals to meet for a private hug-it-out session ahead of Thursday’s debate in Detroit. Such a resolution seems unlikely in a race that has seen candidates joke about rivals soiling themselves, mock their stage makeup and make allusions to the size of their hands.

For the Republican Party that is divided over coalescing around its solidifying frontrunner, Trump’s strong night effectively nudged him closer to becoming the party’s nominee. It might have been premature, but it didn’t stop Trump from staging a presidential-ish news conference. It left his rivals looking like also-rans—which they were.

“We’ve won five states and it looks like we can win eight or nine,” Trump said early in the night. “It’s only too bad that winner didn’t take all. Because if winner took all, this thing is over,” Trump said at an unusual session with reporters at his Florida estate that once was home to a cereal heiress. Trump sounded more like a general election contender than someone who party bosses were trying to derail—an effort that comes late and is likely to come up as short as the contenders themselves.

“I’m a unifier,” the brash billionaire said, seeming to pivot to an Obama-esque message aimed at November. “I know people are going to find that hard to believe but I’m a unifier.”

The question-and-answer session dominated network and cable news for the better part of 20 minutes—priceless airtime during which he sought to appear inevitable. He had kind words for Planned Parenthood and worked to soften Democrats’ inevitable attacks on him for decades of hostile answers toward women—a demographic no Republican can win the White House without a strong showing. He brushed aside very serious questions about whether or not he would repudiate the backing of the Ku Klux Klan.

Still, by falling short in three states, Trump missed a knock-out blow that would have effectively ended the race. Trump rival Ted Cruz refused to yield. He told supporters in his home state of Texas that he alone has defeated Trump anywhere, pointing to wins in Iowa, Texas and Oklahoma. He was later declared victor in Alaska. Shortly after, contender Marco Rubio found his first victory yet, in Minnesota.

Regardless, Cruz’s message was consistent. “So long as the field remains divided, Donald Trump’s path to the nomination remains more likely, and that would be a disaster for Republicans, for conservatives and for the nation,” he said. He urged his rivals “to prayerfully consider coming together, uniting.”

Read More: People on Twitter Were Worried About Chris Christie

Meanwhile, Rubio’s win left him hobbling toward a contest in Florida, a home state faceoff that might be his last credible stand, despite his protestations that he will fight Trump until the convention.

Mathematically, it remains possible for these groups to stand between Trump and the 1,237 delegates he needs to claim the Republicans’ nomination when they meet in Cleveland this summer. A rush of late dollars was circling around those attempts as many in the GOP Establishment still refuse to accept that they might have a former reality show host as their bannerman.

“Obviously, we have to stall him by March 15,” said Tim Miller, a former Jeb Bush adviser who has signed onto efforts to block Trump.

Miller’s new gig, Our Principles PAC, held a donor call Tuesday evening with high-dollar donors to rally financial support to mount a last-ditch nationwide campaign to thwart Trump, and is already plotting ad buys in Michigan, Illinois and Florida. Many on the call are from New York and were eager to see their neighbor fail.

Where past efforts to take on Trump have failed, Miller said the focus will not be on undermining Trump’s candidacy, with a focus not so much on policy, but on his personal and professional failings.

“What has happened in the past in the general GOP critique of Trump is a lot of it was rehashing similar arguments that have been out there,” he said. “We have to play his game. We’re looking for what’s salacious.”

Absent that—and evidence to back it up when Trump’s lawyers challenge television stations that air the allegations—there appears to be little standing between Trump and the nomination. And from there, it’s anyone’s bet where he takes the GOP. 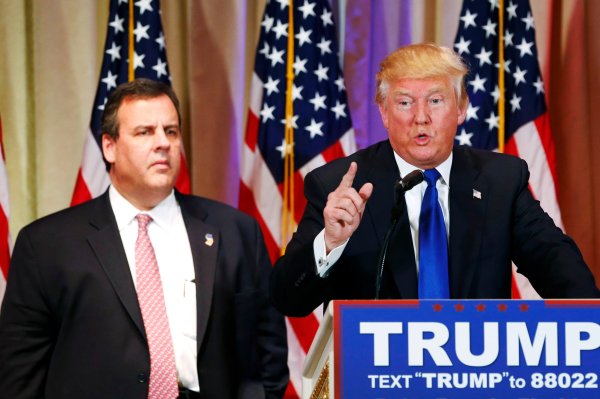 People on Twitter Were Worried About Chris Christie
Next Up: Editor's Pick