Donald Trump and Hillary Clinton tightened their grips on their parties’ presidential nominations Tuesday, with both candidates dominating the biggest night yet of the 2016 campaign in a string of victories that left their competitors with increasingly narrow paths to prevail.

The so-called Super Tuesday states added their voices to a race for the White House that has captured the nation’s imagination, as history could be made with its first female President—or its first reality show star to rise to the highest office in the land. States also awarded delegates to the other hopefuls. Democrat Bernie Sanders won primaries in his home state of Vermont and in Oklahoma, along with caucuses in Colorado and Minnesota. Republican Ted Cruz won his home state of Texas, as well as Oklahoma. And Marco Rubio, who had an otherwise miserable night, finally won his first state of the presidential campaign with a victory in the Minnesota Republican caucuses.

But Trump and Clinton owned the day, winning from New England to the South, often by double-digits and sometimes by wide margins. Clinton bested her insurgent rival in Alabama, Arkansas, Georgia, Massachusetts, Tennessee, Texas and Virginia. Republicans finally stopped Trump from pulling off a clean sweep at about 9 p.m. E.T. He went five-for-five in Georgia, Alabama, Massachusetts, Tennessee and Virginia to start. But Cruz had a strong showing in the south, winning Texas and Oklahoma—his first wins since the Iowa caucuses briefly vaulted him to the top of the field. Trump was later named winner of the Arkansas and Vermont primaries, finishing the night with victories in seven of the 10 contests that had been called shortly after midnight. (Alaska’s Republican caucus was the only race yet to be called early Wednesday morning).

Still, with Cruz also running strong in other southern states, his campaign was poised to pick up significant delegates even in defeat. And Rubio’s middling performance across the country, coupled with Cruz’s victories in the south, threatened to seriously hobble the Florida Senator’s candidacy and his effort to consolidate anti-Trump votes behind him. By the time he spoke to supporters in Florida, none of the three cable TV networks aired his remarks.

Trump, addressing reporters at a news conference in Florida—instead of supporters as he typically does on election nights—painted himself as someone who was growing the Republican Party into a potent force that could defeat Clinton in November. He even sounded like a candidate looking toward the general election.

And he made clear he would hit Clinton hard on her use of a private email server if they meet in the general election.

“If she’s allowed to run, honestly it’ll be a sad day for this country because what she did was wrong,” Trump said. “Other people have done far less than her and they have paid a very, very big price.”

Clinton, who had been looking toward the general election—and a likely matchup with Trump—since her blowout South Carolina win over Sanders last weekend, sought to keep her supporters engaged in a primary fight Sanders has promised to continue contesting.

“Now this campaign moves forward,” Clinton said at a campaign rally in Miami, a nod to the March 15 Florida primary. “We’re going to work for every vote and we will need all of you to continue volunteering, contributing, doing everything that you can.”

“The rhetoric we’re hearing on the other side has never been lower,” Clinton added, without mentioning Trump by name. “Trying to divide American between us and them is wrong and we’re not going to let it work.”

From Georgia to Alaska, the Super Tuesday balloting was the closest thing to a national election that America will to see before November’s general election. More delegates toward both parties’ nominations were at stake than have been or will be on any day during the primary campaign. For Republicans, 661 delegates are at stake out of 1,237 needed to win, and for Democrats, 865 delegates out of 2,383.

No candidate was expected to reach the threshold to become the nominee on Tuesday, but the odds get tougher after this round of voting ends. Delegates were to be awarded proportionally, meaning the winners snag the most but other contenders can capture delegates here and there. That changes on March 15, when it’s win or lose, and winners take all of the prizes.

Even so, it’s possible Trump eventually makes it through the whole process without the requisite 1,237 when delegates cast their first ballots at the GOP convention in Cleveland. Party elders have been contemplating plans to deny him the nomination on that first ballot, and then force delegates to pick someone else—perhaps even someone not currently running—to lead the party. It’s a risky plan, but one many establishment-minded officials are willing to take to prevent Nominee Trump.

After a pair of victories in the south gave his struggling campaign some new life, Cruz renewed his argument that he is the only one can stop Trump from winning the nomination.

“After tonight, we have seen that our campaign is the only campaign that has beaten, that can beat and that will beat Donald Trump,” Cruz said, shortly before Rubio finally won his first state. Saying that Trump’s nomination would be “a disaster for Republicans, for conservatives and for the nation,” he added, in a message clearly directed at Rubio: “For the candidates who have not yet won a state, who have not racked up enough delegates, I ask you to prayerfully consider our coming together, uniting.”

Retired neurosurgeon Ben Carson and Ohio Gov. John Kasich were also vowing to continue their campaigns. Carson has been plodding along with support among some Evangelicals, while Kasich is looking at his home state as his last stand when it votes on March 15. Neither Republican was expected to fare well on Tuesday, but both were still slated to appear in Thursday’s debate in Detroit.

Sanders was at home in Vermont, the state he represents in the Senate and which voted for him Tuesday. He needed it, after Clinton clobbered him in South Carolina over the weekend, and defeated him in Iowa and Nevada. Sanders rushed to claim victory early in the evening, before other states could deliver him defeats. Sanders has vowed to continue his campaign all the way until Democrats have their nominating convention in Philadelphia.

“This campaign is not just about electing a president,” Sanders said. “It is about transforming America. … Together, what we are going to do is create an economy that works for all of us, not just the people on top.”

Write to Philip Elliott at philip.elliott@time.com and Katie Reilly at Katie.Reilly@time.com. 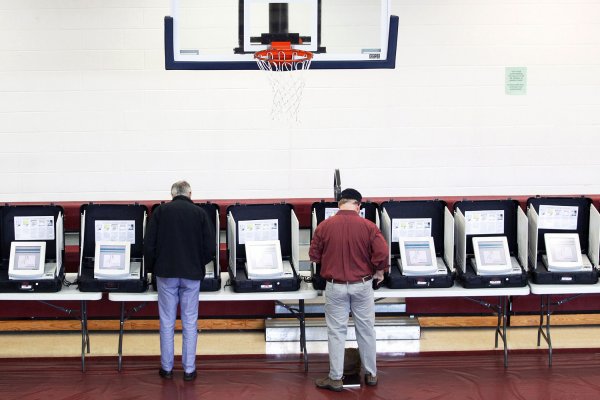 See Voters Cast Their Ballots on Super Tuesday
Next Up: Editor's Pick