See an Astronaut's Last Orbital Sunrise After a Year in Space

Scott Kelly photographs his last sunrise from the International Space Station before returning to Earth after spending a year in space, on March 1, 2016.
Photos: Scott Kelly—NASA; GIF by Mia Tramz for TIME
By TIME Photo

It’s a new day for American astronaut Scott Kelly. After spending 340 days aboard the International Space Station (ISS), Kelly is returning to Earth, and is celebrating with one last photograph of a sunrise – one of the 5,000 Kelly’s witnessed while in orbit.

With the ISS orbiting the Earth every 90 minutes, Kelly was privileged to witness the sun rise and set 32 times a day. “Rise and shine,” he said in one last tweet sent from the station Tuesday morning. “My last sunrise from space then I gotta go!”

Kelly, alongside Russian cosmonauts Mikhail Kornienko and Sergei Volkov, are set to come back to Earth Tuesday, in a seven-hour flight aboard a Soyuz spacecraft. Along the way, they will experience a harrowing, high-speed ride that Kelly has compared to “going over Niagara Falls in a barrel—that’s on fire.”

TIME will be live-streaming the entire reentry process here, beginning at 4:15 p.m E.T.

TIME has been following the year-long mission of cosmonaut Mikhail Kornienko and American astronaut Scott Kelly, in a video series that can be viewed here. A YEAR IN SPACE, a documentary film by TIME and PBS, premieres Wednesday, March 2 at 8 p.m. E.T. on PBS. 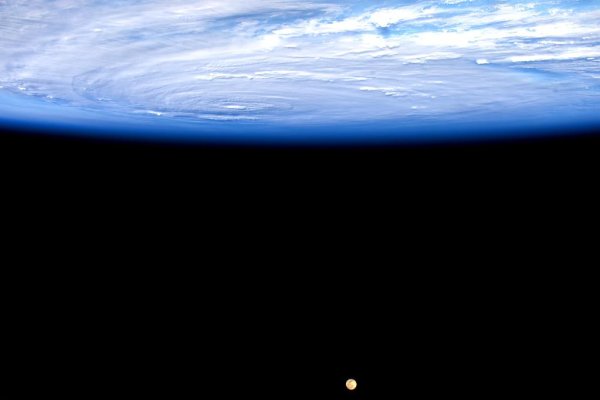 The Best Photographs From Scott Kelly's Year In Space
Next Up: Editor's Pick