Star Wars fans who were disappointed by the dearth of screen time for Luke Skywalker in The Force Awakens can take heart: According to costar Daisy Ridley, Mark Hamill’s sage Jedi will be back in a big way in the Star Wars: Episode VIII.

“It’s two hours of me and Mark Hamill staring at each other,” Ridley deadpanned to MTV News on the Oscars red carpet Sunday.

Turning slightly more serious, Ridley said she and Hamill “have been rehearsing a lot, and it’s really amazing.” She also seemed to confirm rumors that Episode VIII will pick up right where The Force Awakens left off, with Rey (Ridley) and Luke coming face to face on the remote planet of Ahch-To (a.k.a. Ireland’s Skellig Michael).

“When we went back to Skellig to do the opening of VIII, it was so crazy doing the same scene with a different crew of people,” Ridley said. “[Hamill is] amazing to rehearse with, and I’m very excited to be doing the rest of the stuff. It’s such a good story, seriously.”

She added, “Luke is so cool in this one. Really!”

Star Wars: Episode VIII is scheduled to open Dec. 15, 2017. Head over to MTV News to read the full interview. 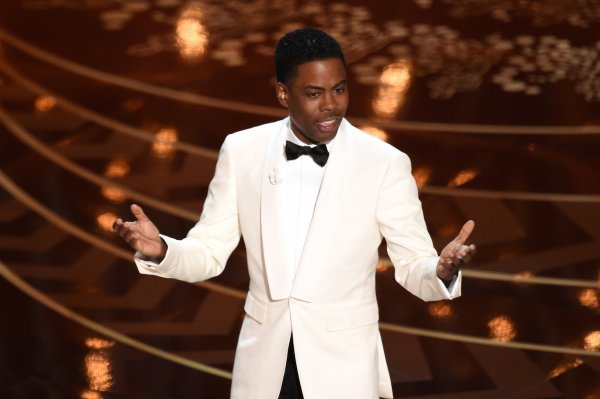 What Chris Rock Got Wrong About the Oscars Diversity Debate
Next Up: Editor's Pick