The GOP's Trump Choice: Live With Him, Or Die Trying To Stop Him

Super Tuesday winners always go on to win the nomination — at least in modern politics. But the prospect of a strong showing by Donald Trump, and the potential for a rout, has his party trying to come to grips with his rise like never before.

With the bombastic poll leader expected to open up a several-hundred delegate lead for the GOP nomination, everyone from party elders to voters in the field are debating whether it’s time to close ranks behind the rapidly solidifying front-runner. It’s the question that will define Republicans over the coming days, and perhaps for a generation: Is the Grand Old Party willing to roll the dice with Donald Trump as its standard-bearer, or is prepared to lose standing up to him.

The choice is illustrated by the approaches of Mitt Romney and Chris Christie, the former GOP nominee has shown new vigor in taking on his would-be successor with biting personal attacks, while the failed 2016 hopeful endorsed Trump in a much-maligned move on Friday.

“The best person to beat Hillary Clinton in November on that stage last night is undoubtedly Donald Trump,” Christie said last week as he endorsed Trump after the Houston GOP debate. Others establishment figures seen as sympathetic to Trump, or advocating for unifying behind him are former Speaker of the House Newt Gingrich and former New York City Mayor Rudy Giuliani, who have warned a protracted primary fight, or a contested convention, could doom the party’s chances against the Democratic nominee in November. The pragmatists discount the protestations of some in the establishment that Trump can’t defeat Hillary Clinton, believing he could upend the general electorate as he has in primaries all year.

With some Republican operatives making plans for adapting to a Trump-led party, including some aides passing resumes to the front-runner’s team, a vocal group of Trump opponents is emerging pledging to fight until the bitter end. A Trump nomination would see a candidate with significant — and persistent — negative favorability rating among his own party, as well as near-historic gaps among Democrats and Independents.

“You can always win another election, but you can never win back your self-respect,” Stuart Stevens, Mitt Romney’s former chief strategist, told TIME, saying Trump’s refusal to immediately condemn former KKK leader David Duke was the final straw. “What good is winning worth,” he said, if the GOP has to stand with Trump to get there.

Katie Gage, another former Romney strategist who runs Our Principles PAC devoted to taking down Trump, said standing up to the front-runner is a moral imperative, but also necessary to protect the party.

“We can’t support a guy who is so clearly a racist, so clearly a sexist, so clearly somebody with no moral compass,” she said. “People just cannot embrace him as a conservative and a republican, because then we’re not even a party anymore.”

Instead, they are advocating all-out war to stop Trump. A Braveheart moment in which candidates and political action committees throw everything they have to stop Trump. And when they run out of attacks, find a way to keep up the pressure. “Here’s the thing about a fight. A: You get in the fight. B: You never stop fighting,” Stevens said.

In recent days, Trump’s leading rivals, Ted Cruz and Marco Rubio, have taken to attacking the poll leader directly, mixing personal insults with substantive attacks. And on Twitter, they have marshaled many in the conservative establishment around the hashtag #NeverTrump. Yet the rivals campaigns acknowledge that their paths to securing the 1,237 delegates needed to win the nomination outright are exceedingly narrow.

If Trump continues to build on his delegate lead, as he is expected to on Super Tuesday, it remains to be seen how long Republican voters will seek to extend the process. Should his lead hold over the coming weeks, one veteran strategist said, “no matter what we try to do [to stop Trump], the voters are going to want to end it.” And while the Republican operative class may be willing to play the long game, most rank-and-file Republicans are yearning for a win after two successive presidential defeats and may join the Trump Train if it appears his path is set.

GOP communications maven Kevin Madden, said he’s become resigned to the party nominating Trump, but added he’d sooner write in another person’s name than cast a vote for him.

If the party forced a convention to try to beat Trump there is no guarantee they can stop him, or that it’s possible to salvage a win in November even if they can. The most likely remaining pathway to blocking Trump relies on party insiders who predominately make up convention delegates to switch their votes away from him on a second ballot, when most are released from their pledges.

“Those people that got their names on the ballot and also party leadership who get some of the delegates are more likely to be willing to consider alternatives when it comes to convention,” said GOP strategist and lawyer Charlie Spies.

But would Trump’s supporters, seeing their preferred candidate spoiled by the reviled GOP establishment, ever return to the fold? “I think some of them are probably Democrats and would only support Donald Trump,” said Spies. “But on the other hand, I think some Republican women are so repulsed by Trump that they’ll only come home if he’s not their nominee.”

Either way, Trump’s most vehement opponents say, they’d rather lose in November without him than see what happens with him as the nominee. “I do think that a big chunk, not a small chunk, not just a tiny minority, will support somebody willing to fight this all the way to the convention,” Gage said.

That doesn’t change the narrow pathway to blocking Trump, but Stevens maintained he’d rather go down swinging: “When you’re fighting there’s always hope.” 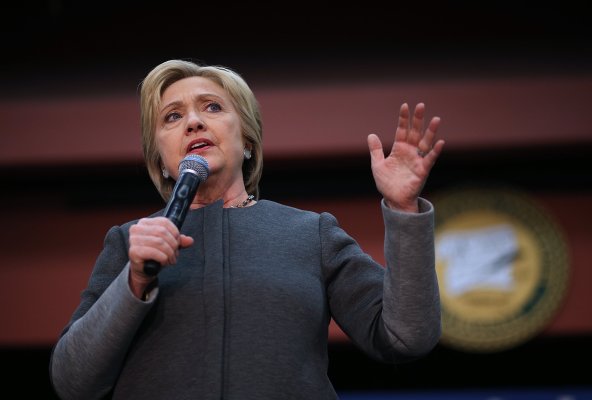 Hillary Clinton Turns to Donald Trump
Next Up: Editor's Pick