5 Things to Watch on Super Tuesday

Everything before Tuesday has been a scrimmage.

Super Tuesday is the biggest day yet in the 2016 race for the White House, with states from Alaska to Georgia weighing in on the contest for both parties’ nomination.

Republican Donald Trump and Democrat Hillary Clinton begin the day as the front runners, but their challengers are working against history and math alike to suggest that they could upend the race.

Indeed, an abacus might be the most useful tool available to them on a day that is giving states in the Mountain West, the South and New England a chance to offer views. It is essentially the closest thing to a national election that the country will see before November.

The race for each party’s nomination is now boiling down to simple addition, with Trump and Clinton ahead in the race for delegates, the party insiders who will officially pick the nominees when they have conventions. Establishment Republicans are looking to derail Trump’s coronation in Cleveland, while Democrats were still unsure if Vermont Senator Bernie Sanders could make a final stand before Philadelphia.

With Trump coming off three consecutive victories and Clinton pulling away from Sanders after a landslide victory in South Carolina, the high-stakes primaries will help decide the nomination for both candidates. For Republicans, 661 delegates are at stake out of 1,237 needed to win, and for Democrats, 865 delegates out of 2,383. Their opponents see a crucial — and perhaps final — chance to reverse the front runners’ momentum.

Voting on Tuesday might usher Trump into the de facto head-to-head campaign against Clinton in November’s generational election. Or it might signal a protracted fight, with Republicans arriving at their nominating convention without, well, a nominee.

Here are five things to watch on Super Tuesday.

Can Ted Cruz win in Texas?

More than Senator Ted Cruz’s considerable pride is at stake for him in his home state. Texas offers 155 delegates to the party in Cleveland, and Cruz has spent weeks ahead of Trump in the state. But polling has been tricky so far, and Trump has proved polling unreliable, especially if tremendous crowds turn out.

If Cruz falters in Texas, it would be a blow to the local hero who has nurtured a pointedly anti-Washington crowd back at home. If Cruz wins, it shows he can win in a place when voters have the time to get to know him. Cruz prevailed in Iowa, a state where he decamped for more than a year, but fell in other places where voters knew his conservative record less well.

Does Donald Trump run the table?

Trump so far is 3-for-4 in states that have held their contests. Only Cruz has been able to top him. Trump is looking to see if his machismo and media savvy can guide him to wins in places that are not familiar with their role in picking Presidents, such as Alabama, Arkansas and Tennessee.

Trump has spent a few days here and there in these Southern states, where his message against immigrants in the country illegally, against letting Muslims into the country and, most recently, in ambivalence toward the KKK could win him votes. If Trump goes 12-for-12, it won’t be enough to cement his role as the nominee. But it’s going to be tough for Cruz, Senator Marco Rubio of Florida, retired neurosurgeon Ben Carson and Ohio Governor John Kasich to catch up in the public’s mind.

Will the losers still be winners?

Public perception at this point might not matter for candidates in both parties. Under party-run rules, the delegates awarded on Tuesday will be done proportionally in most cases. For instances, there could be few differences in terms of delegates between first- and second-place finishes. That means close seconds could net almost as many delegates as the winners. And that means, in the grand abacus of how America picks its nominees, there will no reason for candidates to exit.

Still, the question for the also-rans is how long their donors stick with them. “Yes, we lost, but not by that much” is not an inspiring message to donors. Few donors want to sit through the slide-rulers that dominate party rules and arcane rules. For these deep-pocketed donors, they want to sign checks to winners, and second place is unlikely to inspire generosity — unless, of course, the losers cast themselves as victims. That has proved especially effective for Sanders.

Can Bernie Sanders pull off a couple of clear wins in states like Colorado, Minnesota or Massachusetts?

The Sanders campaign has buckled down on five Super Tuesday states where large numbers of liberals could propel their candidate to victories: Colorado, Oklahoma, Minnesota, Massachusetts and Vermont. A clear win in any of those states outside Vermont would give Sanders a much needed boost. And picking up a couple hundred delegates will be crucial for keeping him within reasonable margins of Clinton.

Sanders has spent significant advertising dollars in most of those states. And they have developed organizations there: Pete D’Alessandro, Sanders’ Iowa coordinator, is in Oklahoma, and Sanders placed staff in those five states early.

But Sanders aides are downplaying expectations. They are behind in polls in Massachusetts, where Clinton campaigned on Monday. His staffers believe Colorado is the most promising of the bunch, but they are making no promises. “My hope coming out of tomorrow is we demonstrate we can beat her in some states and we can develop a good foundation of delegates nationwide. We get through tomorrow, we go through a calendar that is better for us,” said Tad Devine, Sanders’ top strategist.

How big can Hillary Clinton win in Southern states like Texas, Virginia and Georgia?

Clinton flies into Super Tuesday off a huge victory in South Carolina, where an almost 50-point margin has assured her campaign of her deep support among black voters. That sets her up favorably in the Southern states, including Texas, Tennessee, Arkansas, Alabama, Georgia and Virginia, where she is all but assured of pulling off big victories.

If Clinton wins in the South by the same margins she won in South Carolina, Sanders’ path to the nomination will be narrow and ever more unlikely — even if he does win a Northern state or two.

Clinton’s aides believe they can pull off a strong delegate lead. “Even if Sanders won all 5 of his target states by convincing margins (+15), Clinton could still earn at least 50 delegates more than him,” tweeted press secretary Brian Fallon. But the margin could be even larger than that: with 865 delegates at stake on Tuesday, Clinton could pull off around a 100-delegate lead over Sanders just by winning 55% of the overall vote on March 1 — perhaps an underestimate considering recent polling in the South, where she is ahead by 30 or 40 points in some states. 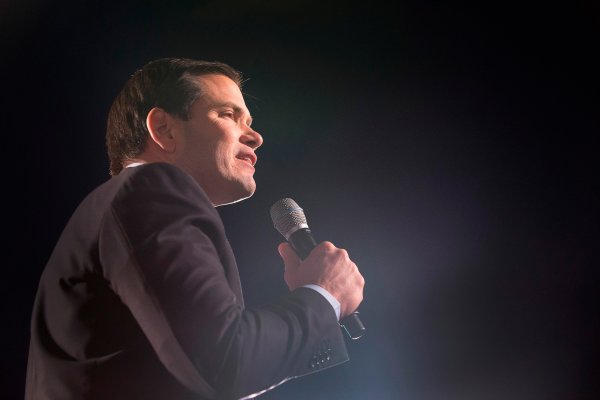 Watch Marco Rubio Sharpen His Attacks on Donald Trump
Next Up: Editor's Pick