Ted Cruz has proved popular with the people running his home state’s oil and gas companies. But if he runs into trouble on Tuesday, it’ll be because of the people they employ.

No 2016 presidential candidate has collected more donations from the energy industry than the first-term Senator, who received almost twice as much as his next closest competitor, former Florida Gov. Jeb Bush. (And fundraisers say even more flowed his way after Bush left the race.)

But trouble in the oil and gas sector has flattened the Lone Star State’s economy, potentially boosting front-runner Donald Trump.

Cruz may yet win Texas comfortably on Tuesday. An NBC News/ Wall Street Journal poll released Sunday found Cruz polling at 39% support in Texas, with Trump trailing at 26% support among likely Republican primary voters. But another recent poll from Emerson University showed him up by only one percentage point, and Trump has confounded pollsters in other states, proving historical models unreliable.

Texas is the biggest prize in Cruz’s Southern-flavored strategy for Super Tuesday. He’s hoping to fare well in primaries in Alabama, Arkansas, Georgia, Oklahoma, Tennessee and Virginia, while also competing in Massachusetts, Vermont, Alaska, Colorado, Minnesota and Wyoming. Reliable polling is scarce in most states, but Trump seems positioned to do well.

But the contest in Texas may come down to how voters feel about the economy. After almost two years of bargain-basement prices at the pump, oil and gas producers and service providers across the energy-rich heartland are struggling with soaring debt, deep budget cuts, relentless layoffs and the looming threat of mass bankruptcies this year. It’s been good for families with SUVs, but bad for the people selling them fuel.

Cruz has done well with oil and gas companies that are among Texas’ biggest corporations. Houston-based Quantum Energy Partners’ co-founder Toby Neugebauer wrote a pro-Cruz super PAC a $10 million check. The Cisco, Texas-born Dan and Farris Wilks and family members have given pro-Cruz super PAC $15 million. Both families made fortunes in fracking, a type of shale gas extraction.

Oil and gas employees have given his campaign almost $900,000—roughly twice the amount they have given to Bush, whose brother was an energy executive and Governor of Texas, and whose son is the current Land Commissioner. Through late February, the industry has spent more than $44 million on all 2016 federal elections, including $22 million to outside groups such as super PACs. That ranks it the fifth largest industry for political donations in the country, according to information compiled by the nonpartisan Center for Responsive Politics.

But times are tough for many of the workers in the field.

Almost a third of U.S. oil producers are now at risk of going bankrupt this year, according to a recent study by Deloitte. If anywhere close to the most fragile 175 companies slip into insolvency, they’ll take tens of thousands of jobs and roughly $150 billion of investor cash with them—that’s 31% of all distressed debt in the United States, according to Standard & Poor’s.

The eight most energy-dependent states—Alaska, Louisiana, New Mexico, North Dakota, Oklahoma, West Virginia, Wyoming and Texas—vote consistently Republican, yet have been the hardest hit by the crisis.

Cruz’s home state, which was responsible for 40% of all U.S. oil production in 2014, and stakes 11% of its economy on black gold, has by far the most to lose. Since 2014, Texas has lost more than a quarter million jobs, including both oil and gas jobs, and service, transportation and technology jobs that support the industry, according to Karr Ingham, a petroleum economist who compiles the semi-annual Texas Petro Index for the Texas Alliance of Energy Producers. He expects both job loss and bankruptcies to continue this year.

Royal Dutch Shell, Chevron and Halliburton have all announced plans to cut thousands of more jobs. Tax revenues from the oil and gas industry are 48% lower than they were this time last year.

Cruz has been aggressive in raising money from this industry. His wife, Heidi Cruz, took a leave of absence from her managing director gig at Goldman Sachs to help her husband raise cash from her friends at energy companies. Even her critics inside the campaign on other matters praise her ability to collect cash.

Yet this also puts him in a tough spot. “Ted Cruz is rushing to cash checks from these energy executives, not because he needs the cash but because he’s worried these execs’ checks might not clear,” sniped one fundraiser for a failed Cruz rival.

Trump has already hit Cruz with scorn over his oil ties, too. “He’s right now for the oil. But I understand because Big Oil pays him a lot of money,” Trump said earlier in the campaign. “He’s got to be oil, right? The oil companies give him a lot of money.”

In the past two years, oil prices have declined 75%, reaching a thirteen-year low, from $115 a barrel in July 2014 to below $27 a barrel this month, according to Leonardo Maugeri a senior fellow at the Geopolitics of Energy Project, a Harvard University Kennedy School of Government initiative.

A confluence of factors is responsible for the swing in prices. A slowdown in the Chinese market and the failure of the European market to get up to steam coincided with a shale boom in the U.S. Meanwhile, the Organization for Petroleum Exporting Countries, OPEC, has increased supply, in an effort to squeeze out emerging markets in the United States and Iran.

“This is a price war,” Dan Steffens, the president of the Houston-based Energy Prospectus Group, told TIME. “This isn’t a supply and demand situation so much as it is a price war.”

The energy companies’ fragile balance sheets also have do with producers across Texas, Oklahoma, Louisiana and South Dakota borrowing heavily in the wake of the financial crisis, when interest rates were low, and the price-per-barrel of crude was on the rise. In the last two years, the spigot of new capital to the industry has been largely shut off, triggering what many fear will be a liquidity crisis in the industry.

“If oil prices fall just a little bit, you see a small benefit for consumers, which is good for the economy,” said Michael McDonald, a professor of finance and the president of the financial consulting firm, Morning Investments. “But when oil prices fall as much as they have, it’s destructive, not only for oil industry profits, but for the capital investment and jobs. In states like Louisiana, Texas, Oklahoma and North Dakota, their economies have just been hammered.”

This month, U.S. oil companies are operating just 413 oil rigs, that’s down 26 rigs from January, and down from 1,019 rigs a year ago, according to a report by a top oil field service company, Baker Hughes. Every time a rig shuts down, hundreds of jobs are lost. It’s not just the direct oil production jobs, Steffen explains. It’s the vast, multi-billion dollar web of companies that provide the technology, raw materials, equipment, and transportation to the industry, too. As a result, a handful bankruptcies could have a multiplier effect across the economy.

Most economic models, including the Texas Petro Index, estimates that for every oil production job lost, roughly four indirect jobs are lost, too. Other economists estimate the multiplier effect is closer to six or seven indirect jobs. Texas’ oil is akin to Michigan’s automakers; when the major industry fails, everything else goes with it.

While most analysts are hesitant to predict an immediate collapse in the market, they are less shy about dismissing rosy views of the future. “Oil producers hope that in 2016, the demand for ‘black gold’ will rise enough to clear at least some of the excess that has been created,” explains Harvard’s Maugeri. “This seems unlikely.”

And if that proves true, it won’t be the first time Houston and similar energy-forward cities have seen the troubles. Unlike the disaster of the 1980s, though, Houston has diversified its economy. While one in 14 new jobs in Houston were based in the energy sector in the last decade, one in seven came in healthcare, according to consultants Workforce Solutions. So while bankruptcies and foreclosures in Texas are up, it’s not as bad as it could have been.

And Texans are used to this. “It’s been a cycle of discovery, a cycle of exploitation, a cycle of pause, a cycle of reorientation. That’s how we’ve always faced it. There are always going to be changes in commodity price. There’s always going to be change in demand. … The industry knows how to deal with this,” said Houston attorney Jeff Schlegel, co-head of Jones Day’s Global Energy Practice that, last year, had more than $150 billion in deals come across his desk last year. “I’ve never spent more time looking at the price of crude.”

Schlegel recently has been starting his days at 4 a.m., as clients and customers alike want to start discussing deals to help them minimize their losses and maximize profits should the oil and gas industry go the way of 2008’s economic crisis. He cautions clients that the industry isn’t on the precipice. But the 25-year veteran of the industry warns that elections cannot solve the challenges facing the markets. “Whatever happens on the political side, demand will eventually increase,” he said. “People are still investing in the city. We all look at this as a long-term play, not a short-term play.”

The question on Tuesday will be whether Texas voters stick with their home-state Senator, or if an uncertain economy pulls them to Trump’s side.

Write to Haley Sweetland Edwards at haley.edwards@time.com and Philip Elliott at philip.elliott@time.com. 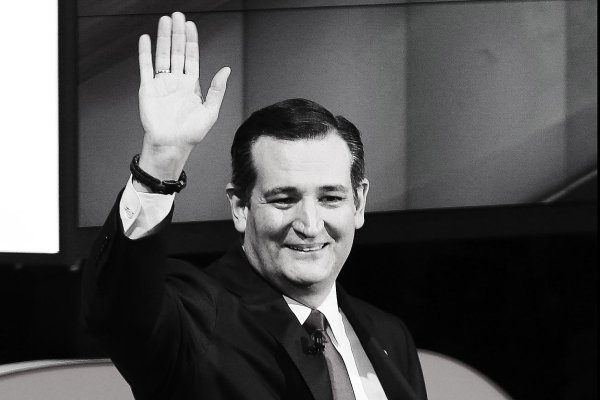