Inside the Gigantic Operation to Meet Astronauts Coming Home

There’s an ocean of space between low-Earth orbit and the dunes of Mars. And there’s a galaxy of truth between the real-world experiences of space station crew members Scott Kelly, Misha Kornienko and Sergei Volkov, and the made-up story of astronaut Mark Watney in the blockbuster book and movie The Martian. But there’s something powerful, and wonderful, they share.

“Every human being has a basic instinct—to help each other out,” says the voiceover in the movie’s trailer. “If a hiker gets lost in the woods, people coordinate a search. If an earthquake levels the city, people all over the world send emergency supplies. This instinct is found in every culture. Without exception.”

That instinct was on display early this afternoon in Karaganda, Kazakhstan, as members of at least three cultures—American, Russian and Kazakh—gathered in a hotel conference room for a briefing on the massive recovery operation that is now stirring to life to retrieve the three members of the ISS crew when they land in the Kazakh plains on Wednesday morning at about 10:45 local time (11:45 PM ET, Tuesday).

The size of the force and the scope of the preparation was evident partly in the numbers that were being thrown about—14 helicopters, three planes, six all-terrain vehicles and 184 people—performing the immediate, hands on work when the Soyuz reentry vehicle hits the ground, extracting the crew and evacuating them to the nearby city of Zhezkazgan.

But those assets are only the center of the storm. Back-up teams and vehicles remain in place in both Karaganda and the city of Arkalik, and others still are standing by in the cities of Orenburg and Baikonur. Hospitals are also prepared to receive any crewmembers for any reason in all five locations.

Coordinating so many moving pieces requires the cooperation of multiple groups, including NASA, Roscosmos (the Russian space agency), the Russian Air Force, the Russian and Kazakh Departments of Defense, global weather services, regional medical services, and the government of the city of Karaganda itself.

“We are happy to see you here,” the deputy mayor said in brief remarks to the 100 or so people in the room, after numerous military and space officials delivered readiness updates. “This is our input to international cooperation. All our forces and medical support team are ready to assist. On behalf of myself and the mayor of the region, I would like to wish the crew a safe landing.”

That crew has not been passive in making that safe landing happen. In the past week, Kelly, Kornienko and Volkov have been conducting multiple reentry simuations aboard the station—something all crews do as they prepare to come home, but that requires special care in this case.

Volkov will be in the center seat, commanding the spacecraft on reentry, but Gennady Padalka—who was aboard the station for only six months—filled that role when Kelly and Kornienko left Earth nearly a year ago. Soyuz crews are required to operate with the same kind of mutual mind-reading as an infield trio turning a triple play without even looking at one another. That’s not so easy when one member of the crew—and the commander, no less—is a newcomer, so the final-week rehearsals have taken on special importance.

The one variable over which nobody in space or on the ground has any control at all is the weather, and so far it’s only partly cooperating. Winds at the recovery area are predicted to be a calm 7 meters per second—or 15 miles per hour. Temperature is expected to be between 3° C and 6° C (37° F and 42° F) which is flat-out balmy for Kazakhstan in early March. But heavy fog has already forced the prime staging area to relocate 329 miles (530 km) from Karaganda to Zhezkazgan, and both personnel and heavy equipment are now making the move to the new site.

This kind of massive recovery effort is not remotely new. Cosmonauts and astronauts have been landing in Kazakhstan since Yuri Gagarin became the first person in space on April 12, 1961, and crews have been returning from the International Space Station in particular for 15 years.

Nor is there anything new about the impulse that drives so many people to work so hard to ensure the safety of three men most of them don’t know and never will. We are a species that in some ways makes no sense. We find it very easy to take lives—a single shell striking a single neighborhood in a single war can kill hundreds—and so we do it a lot. We find it much, much harder to save lives—a mobile army deploying across an entire country to catch three men as they fall out of the sky—and yet we do that a lot too.

Now and then, however, we get a glimpse of what drives that second, better part of our binary nature. Late in today’s briefing, a man named Alexander Volkov stood up to address the room. He is a former cosmonaut who flew three Soyuz missions himself, one to the now de-orbited Mir space station. More important, he is also the father of Sergey Volkov, the returning Soyuz commander. Volkov the elder spoke only briefly today, acknowledging all of the teams involved in the recovery and thanking them for working so hard to bring his son home.

“I will be very happy,” he said, “if you will make that happen.” If the people in the room were not ready to do that before Volkov spoke, they surely were now. 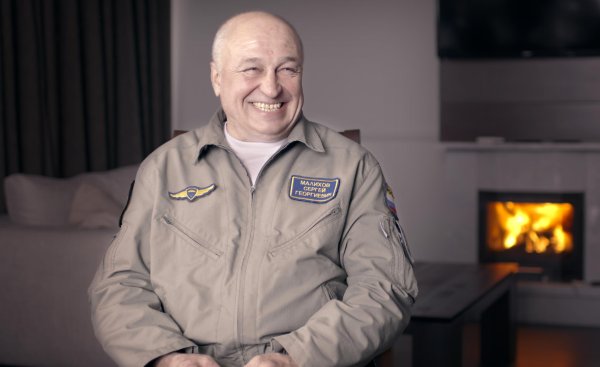 This Is The First Face Astronauts Will See After a Year in Space
Next Up: Editor's Pick