The Oscars Were Still Too White, but There's Hope for Next Year

Change is in the air already.

But for now, the 88th Academy Awards have been put to bed, and the show — in addition to being one of the most well-tuned and least boring in years — may have opened the door to a somewhat brighter future. Host Chris Rock spun out a brilliant gag about the racism of Hollywood, explaining that it isn’t “burning-cross racist” but “sorority racist,” as in: “We like you, Rhonda, but you’re not a Kappa.” But he also spoke astutely to the idea of boycotting — as in, how is not showing up going to help anything? His opening monologue and all the interstitial riffs that followed — including the moment he brought out a troop of Girl Scouts, all of them young women of color, who fanned out into the audience to sell their Tagalongs and Trefoils — opened a valve on the steaming-hot diversity issue. Within minutes of taking the stage, he’d let us all know that it was O.K. to enjoy the show — but also that we should all be ashamed if nothing has changed in the industry by the time next year’s nominations roll around.

While it’s probably unduly optimistic to call 2015 the last hurrah of superwhite Hollywood, it’s certainly possible to envision something different next year, and an even more changed landscape the year after that — by that time, maybe we’ll see more evidence of casting directors’ and filmmakers’ thinking more broadly about who belongs in that sorority. As it stands now, though, the 2016 Academy Awards was a fairly typical jumble of expected winners and pleasant upsets. The night’s biggest surprise was that Spotlight, a beautifully crafted movie built on a bedrock of terrific performances, took Best Picture over the more showboating front-runner The Revenant. Alejandro González Iñárritu took home so many Oscars last year for Birdman, the audience may as well have just stayed in their seats to watch him take yet more for The Revenant, which also won for Emanuel Lubezski’s cinematography and, of course, Leonardo DiCaprio’s lead performance, as a trappers’ guide left for dead in the western wilderness of the 1820s. No one was surprised about that win, either, but you also got the sense that everyone was happy for him. (DiCaprio has been nominated six times, but this was his first win.)

Earlier in the evening, though, it looked as if The Revenant might be nosed out by George Miller’s Mad Max: Fury Road, which took a whopping six awards (including editing, sound editing and costume design). Alicia Vikander’s Best Supporting Actress win (for The Danish Girl) and Brie Larson’s Best Actress award (for Room) seem to follow the Jennifer Lawrence mode of young actresses who break out very quickly — not that there’s anything wrong with that.

Mark Rylance was terrific in Steven Spielberg’s solid and rather underappreciated Bridge of Spies, and he gave a lovely, gracious speech as well — he praised his fellow nominees, in a straightforward way, and asserted, “It’s a wonderful time to be an actor.” Still, count me among the millions who were disappointed not to see Sylvester Stallone get the award for his role in Creed. What might that speech have been like? And what’s it like, anyway, to go from being a mumbling Expendable wearing too much oversize silver jewelry to becoming an Oscar front-runner? Maybe Stallone’s almost-win is as good as the real thing. It’s the kind of comeback few of us would have predicted for him.

But for me, the best and most gratifying award of the evening was Ennio Morricone’s win for the galloping, mischievously sinister-sounding score he wrote for Quentin Tarantino’s The Hateful Eight. The picture is problematic in all sorts of ways, but Morricone’s score is just about perfect. Astonishingly, this is the first Academy Award Morricone, 87, has received for a specific score. (He was given an honorary award, for his body of work, in 2007.) To watch him take the stage, clearly ready to cry as he prepared to give his speech, is to be reminded why we watch this awards show year in, year out, putting up will all manner of frustration, boredom and outright disgust. Sometimes, among the winners, there are tears that make you roll your eyes — melodramatic actresses who jabber on about how they can’t believe they won, and the like. And other times there are tears from people who have poured their whole lives into work that has given the world great joy, movie after movie, year after year. Sometimes one thing goes right in the universe, and it just happens to be at the Oscars.

Next year, if all goes well, maybe we’ll see a different kind of right thing. 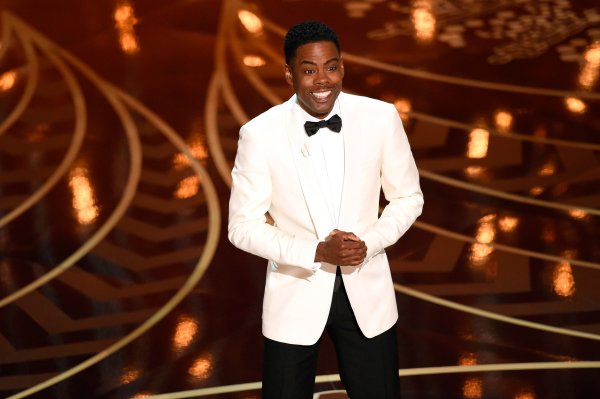 How Chris Rock Won the Oscars
Next Up: Editor's Pick