Microsoft's Most Insane Invention in Years Is Coming Out in March

Developers will soon get their first opportunity to create apps and games for Microsoft’s HoloLens mixed reality headset, which adds holographic computer images to the wearer’s physical environment.

Microsoft announced Feb. 29 that the Development Edition of its holographic eyewear will start shipping to developers on March 30. Preorders will start immediately with a price tag of $3,000.

This version of the HoloLens is aimed at software creators rather than consumers. It will give programmers the chance to experience the device so they can create a vibrant software ecosystem vital to the headset’s success.

Read more: What Impressed Me the Most About Microsoft’s HoloLens

Microsoft is giving developers a handful of apps intended to help them understand the HoloLens’ potential, including a holographic version of the Skype communications app and a world-exploring app called HoloTour. Games are in the mix too, like crime drama Fragments and platformer Young Conker, both of which turn players’ physical environments into the game space.

“It is amazing how different the play experience feels based on playing the game in your living room versus your kitchen or your bedroom,” writes Microsoft’s Kudo Tsunoda in a blog post. “Even starting the game from a different position in a single room creates an entirely new gameplay dynamic.”

Microsoft is shipping its futuristic headset to developers just as the first mainstream virtual reality devices are starting to arrive. The Facebook-owned Oculus VR’s Rift goggles are expected to ship at the end of March, while HTC’s Vive virtual reality eyewear is coming in April.

Although the HoloLens experience might sound similar to virtual reality, it’s notably different. Unlike VR headsets, the HoloLens projects three-dimensional holograms onto the real world around a wearer, meaning the actual environment around a user is still visible. The HoloLens is a self-contained Windows 10 computer to be worn on the face with which wearers can interact through gestures, gaze, and voice commands. 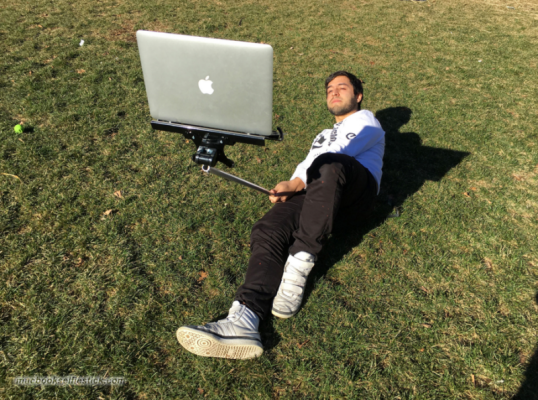 There’s a MacBook Selfie Stick and It’s as Amazing as It Sounds
Next Up: Editor's Pick