Stephen Curry of the Golden State Warriors celebrates after hitting the game winning shot against the Oklahoma City Thunder on February 27, 2016 at the Chesapeake Energy Arena in Oklahoma City, Oklahoma.
Layne Murdoch—NBAE/Getty Images
By Sean Gregory

American are angry these days. The surveys say it. This election thrives off it. And whether it’s Washington’s dysfunction, the middle class squeeze, or the threat of terrorism–from both inside and outside our borders–there are plenty of reasons for it.

But what fun is it to fume all the time? We all deserve a break from reality. And right now the best antidote for American anger is a basketball player of average strength and seemingly-average physical prowess who is somehow treating the NBA like a lab experiment. His opponents, some of the most gifted athletes in the world, have been turned into fawning fanboys. So please, give yourself a break, sprint to the nearest TV set, and watch Stephen Curry play basketball.

Sports as psychic healing is usually a trope. Local team makes the championship, lifts distressed city to new heights, etc. Curry, however, is on a run of the sort we’ve never seen on the local news. On Feb. 27, for example, Curry scored 46 points against the Oklahoma City Thunder, hit 12-three pointers — tied for a single-game NBA record — and saved his best shot for last: with time running down in overtime, and the game tied 118-118, Curry pulled up from 38 feet for the game-winning attempt, even though he had a couple of more seconds to dribble closer to the hoop. No matter: he effortlessly sank the shot. While the ball hung in the air, Enes Kanter, a reserve center for the Thunder, resigned himself to a loss, via shrug. Dagger, courtesy of Curry. “Absurd,” said Draymond Green, Curry’s All-Star teammate, afterwards.

Over his past four games, Curry is averaging 43.8 points, and shooting 61.1% from three-point range. During the Thunder game, Curry broke his own NBA single-season record, of 286 three-pointers made, that he set just a year ago. And the Warriors still have nearly a third of their season left to play. Consider: the Warriors have played 70% of their games. In baseball, 70% of the 162-game regular season is done after Game 113. In 2015, the New York Mets played their 113th game on Aug. 11. So it’s like Curry broke his own home-run record before mid-August.

Read More: Stephen Curry and the Greatest Show on Earth

Watching an athlete at the top of their game is like getting a dopamine shot on your sofa. Curry and his Warriors, who are 53-5 and chasing the record of 72-regular season wins set by Michael Jordan’s 1995-1996 Chicago Bulls, play the game with uncommon joy: they share the ball, make thrilling shots, and celebrate with abandon. You don’t need to breathe basketball, or even be a fan of the game, to share Curry’s good vibes, to realize that no human should ever be able to throw a ball from that distance, often with the defense draped all over him, into a basket. Curry’s shots arc into the air, just building the suspense. Your hands are in your hair, no way, no how…. splash.

America’s problems are all too real. No athlete will keep America safe, jump start the economy, or tamp down a bitter presidential election. But Curry’s jawdropping performances, the types of which we’ve never seen before–and likely never will again–offer needed relief. Catch the thrill ride while you can. 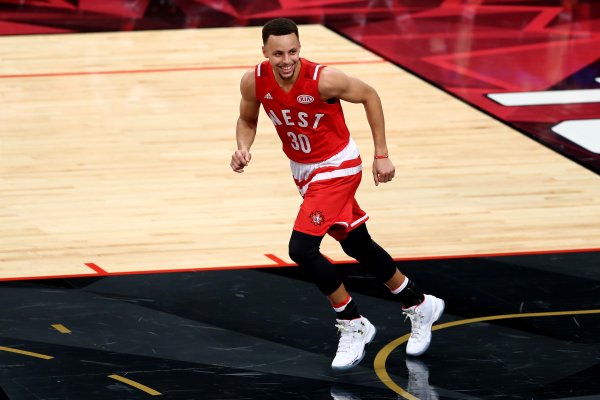