It happened when I took dinner over to my neighbors, who’d just brought their bundle of joy home from the hospital days before. As I held their daughter, the mom Jillian asked me: “So when are you going to start having kids?” I knew lots of people wondered. Dan and I had been married several years, and I wasn’t working. We looked to the world like a Mormon couple ready to start a family.

“I have health problems,” I told her. “We’re not sure we’ll have children.” Usually this was enough to ward off further discussion, but Jillian had health problems, too, and was eager to solve mine. She’d been able to conceive and carry a healthy baby to full term. It was her miracle.

But my miracle had already happened. I was the Thank-God-She-Got-Hit-by-a-Car Girl.

When I was 12, I was hit by a car while crossing the street. I cracked my head on the windshield and was raced to the hospital. CT scans showed several fractures to my skull, but that wasn’t all—it also showed a pre-existing, grapefruit-sized brain tumor in my cerebellum, so large that it was close to killing me. Without the accident, we’d likely never have discovered the tumor until it was too late.

It explained so much—why I’d gotten headaches before I even knew what headaches were, why I was clumsy and uncoordinated. I’d been living with a brain injury my whole life and hadn’t known. It had taken another brain injury to discover it.

The tumor was removed completely, and a biopsy showed it was non-cancerous and had little chance of regrowth. My skull fractures were repaired. I had a railroad-track incision running down the right side of my head, and an upside-down Y scarring my forehead, but I was alive. I was lucky.

I told Jillian my story. I explained that my childlessness wasn’t a matter of fertility or reproductive health—it was a matter of who I was, of my unique way of living with traumatic brain injuries. Every step of the motherhood process was a big, disconcerting if: if I was able to get pregnant, if the pregnancy was viable, if I’d be able to go off my medication. Then came the biggest if of all: If I could care for a child when it took all my energy to simply care for myself.

I knew Jillian could see how I held her daughter, cradled in my left arm with the right only offering minimal support and shaking anyway.

She didn’t ask for the baby back. Instead, she exclaimed: “But that’s just an excuse!”

It wasn’t the response I expected. I didn’t talk about what had happened to me very often because it didn’t come up in casual conversation. People didn’t ask about my disability—many didn’t know I had a disability. Later, if they found out, they were often amazed.

But not Jillian. Or maybe she was. It was impossible to tell, because she’d already launched into a story about a friend of hers who was missing both arms, and cared for her child using only her feet. “If a woman with no arms can do it, you can do it,” Jillian said.

It was easier when my head was shaved and the scar on my forehead still glowed red like a traffic light, issuing a warning: slow down for this girl. She obviously needs special care. Then the hair grew back and the scar faded. No one could see that I hadn’t fully healed.

Because when you have arms, people expect them to work. Even if they know you have a brain injury, even if they have a vague idea that you have a “disability,” even if they love you and want to help you; want to understand. People don’t see the extra sleep I need just so I can walk in a straight line. They don’t know that my difficulty putting on a sweater, or eating a hamburger, or typing a sentence, is because of my brain injury.

Brain injuries are an invisible disability, and no two are exactly the same—each as unique as a fingerprint or a snowflake. There isn’t a cure for brain injuries; they don’t grow back like hair or fade like scars. Dealing with the effects is a lifelong, day-in-day-out process, which might mean something different for me than it does for a football player or a veteran. So it’s up to me to show people what I need. And it’s up to them to understand what they see. 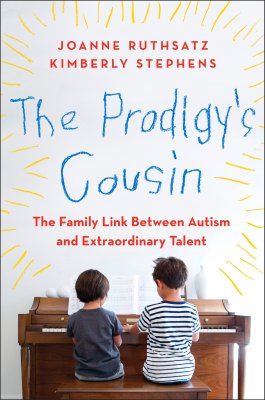 The Hidden Links Between Autism and Genius
Next Up: Editor's Pick