After laying into each other that the Republican debate Thursday night, Florida Sen. Marco Rubio and businessman Donald Trump escalated their fight in dueling Texas rallies on Friday.

Friday morning, Rubio read Trump’s insulting tweets off his cell phone, making fun of the frontrunner’s spelling mistakes. Trump had tweeted: “Lightweight Marco Rubio was working hard last night. The problem is, he is a choker, and once a choker, always a chocker! Mr. Meltdown.”

“He is a chocker. And once a chocker, always a’ — a choker, I guess that’s what he meant to say,” Rubio said when reading the tweet at his rally, according to CNN.

He also turned one of Trump’s favorite insults against Rubio, that he sweats, back on Trump, saying he had “one of those little sweat mustaches,” that “he was having a meltdown” and even implying that Trump had wet his pants, CNN reports.

But at his own rally later in the day, after nabbing an endorsement from New Jersey Gov. Chris Christie, Trump responded in kind. He brought back the sweating insult in an hypothetical of Rubio meeting with Russian President Vladimir Putin: “He walks in and he’s drenched. I have never seen a human being sweat like this man sweats. … It looked like he had just jumped into a swimming pool with his clothes on.”

Trump then took out a water bottle and sprayed it around him while yelling, “It’s Rubio!” 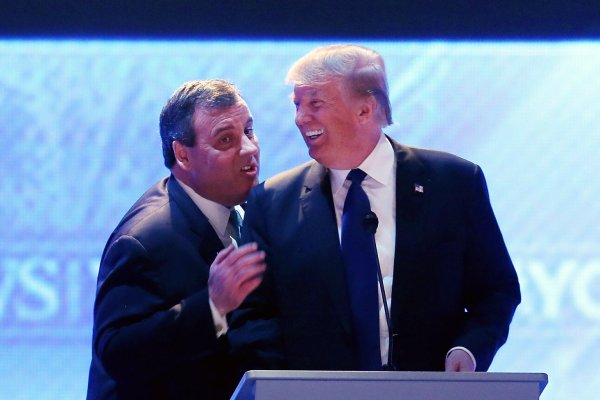