A supporter of Republican presidential candidate Donald Trump sits in the audience during a campaign stop at an Elks Lodge in Salem, N.H., Feb. 8, 2016.
Charles Krupa—AP
Ideas
By Sally Kohn
Sally Kohn is a CNN political commentator, activist, host of the podcast State of Resistance and author of The Opposite of Hate: A Field Guide to Repairing Our Humanity.

In 2008, when Hillary Clinton was running against Barack Obama for the Democratic Party’s presidential nomination, Clinton made a deeply revealing comment about how the political establishment thinks. Referring to news reports that her campaign was in peril after a string of primary victories by Obama, Clinton said: “Sen. Obama’s support among working, hard-working Americans, white Americans, is weakening again.”

Many interpreted the comment as incendiary, dogwhistle racism—Clinton implying that “hard-working Americans” are “white Americans.” Which, for the record, I believe it was. But Clinton’s comment also reflected another strain of the white supremacy mindset within her party and the political establishment more broadly—the idea that white voters are the ones worth working hard to win.

When Obama defeated John McCain in 2008, conservative activists referred to Obama’s supporters as “low information voters.” When Obama was re-elected in 2012, defeating Mitt Romney, right-wing pundits alleged that some of the votes Obama won were fraudulent. Mind you, since 1976 no Democratic presidential candidate has won the majority of white voters. But somehow, voters of color coming together to elect a president of color was more than the establishment could take. And the response was to delegitimize voters of color.

“I have a much broader base to build a winning coalition on,” Clinton said in that 2008 interview. Broader carries a whiff of “more legitimate,” too.

Clinton now has her entire candidacy riding on voters of color, especially older black men and women more accustomed to a lifetime of their votes being taken for granted. Both because of the challenge posed by Bernie Sanders and the confrontations (thankfully!) raised by the Black Lives Matter movement, issues of racial justice and the concerns and wishes of black voters are for once, at least momentarily, in the foreground of a major political party’s presidential primary. Witness the fact that Clinton’s landslide victory in South Carolina was almost entirely because of black voters (Sanders won white voters), which may also prove to be the decisive victory for Clinton in staunching Sanders’ momentum.

And even on the Republican side, the contest for voters of color is noteworthy. In the wake of the 2012 election, the Republican Party issued an “autopsy report“ noting that the party would continue to lose national elections unless it did more to appeal to women and Latinos. And despite the fact that the party’s frontrunner, Donald Trump, seems to be doing everything in his power to alienate Latinos—which appears to have worked, as 8-in-10 Latinos nationally view Trump unfavorably—even Trump seems to know which way the wind is blowing and has boasted that he’s “Number one” with Hispanics. His comment is noteworthy in a race in which his two leading competitors, Ted Cruz and Marco Rubio, are both Latino, and in which Trump’s support has been largely built on base of angry white voters.

The 2016 presidential elections will likely go down in history for several reasons but certainly among them is the influence of those angry white voters witnessing their own last hurrah. If 2004 was the year of one angry white man screaming (Howard Dean), 2016 is the year of millions of angry white men and white voters in general screaming into the abyss—seeing the already-flickering flame of their outsized importance finally extinguish and raging, raging against the dying of the light.

Phillips is agitating for the Democratic Party but his point applies across the board: to no longer marginalize voters of color as taken-for-granted afterthoughts but to center black and brown voters in the American political project. “White can no longer be the starting point. We must now begin with Brown, and that is why Brown is the new White,” Phillips writes.

The cultural, economic and political history of the U.S. has always been rooted in white supremacy. Sometimes it’s been explicit, in the case of slavery in the past or racially biased criminal justice policies today. And sometimes it’s been implied, as in the way that political parties treat white voters as more worthwhile and legitimate than voters of color—as though there’s something inadequate or even shameful in predominantly courting, let alone winning with, voters of color. And despite evolving demographics to the contrary, even our language still betrays this bias—when we talk about “non-white” voters and “minority” voters in ways that still centers whiteness and white voters as the standard.

As Phillips notes, many white progressive voters are happy to find common cause with voters of color and enter this brave new political landscape as part of a new, non-white-dominant political coalition ushering in greater equality and opportunity for all. Yet some white people, it must be noted, are not happy about it. Two-thirds of New Hampshire Republicans support Donald Trump’s ban on Muslims entering the U.S., and one-third of Trump supporters in South Carolina support banning all gay people from entering the U.S. These are the white voters who want their issues at the center of the political conversation and want their votes at the center of the electoral process and see the equality of others as translating to their own marginalization.

As the trends in the Democratic and Republican Parties seem to reflect, these white voters do matter less and less in American politics going forward. But for now, they’re angry. And making themselves heard. Mostly by screaming in favor of Donald Trump. 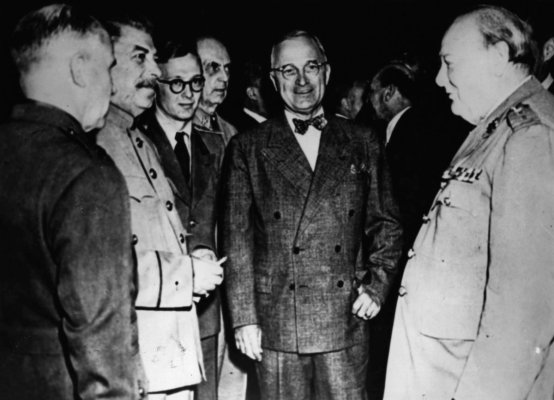 Both Truman and Obama Faced a Choice: Retreat Peacefully from the World or Engage
Next Up: Editor's Pick