Both Truman and Obama Faced a Choice: Retreat Peacefully from the World or Engage

A few weeks ago in his final State of the Union address President Barack Obama said that the United States needn’t always face a choice between invading, occupying and rebuilding troubled nations, and outright isolationism. There is a third option: a pragmatic, middle-ground that has other nations doing most of the dirty work, in collaboration with us, as needs arise.

It sounded straightforward enough. Leave behind your slogans and labels—interventionism and isolationism, realism and idealism, and so on—and just be pragmatic.

Americans like slogans and labels, for some reason, especially in foreign policy. Pragmatism is as good as any other. So why not give it a try.

But there usually is a devil in the details. A Secretary of State from the previous century, Dean Acheson, liked to say, it’s not what you do, it’s how you do it that counts. Another trite phrase to appeal to the milkman from Omaha. Still, he was probably right.

The leaders of Acheson’s generation faced a similar choice. Just after the Second World War there were many people who wanted a homecoming and a peace dividend. There was a minority that warned of the pitfalls. The world was still dangerous; America still had to take the lead.

Harry Truman today gets much credit for choosing the latter course. But he didn’t do it at once. He wavered for the better part of a year. On the one hand, he had pledged to stay true to the legacy of President Roosevelt. America would lead. On the other hand, he didn’t know what this meant, exactly. Did it mean keeping a giant arsenal? Building a world government? Fighting more wars?

Truman wanted none of those things. Nor did the American people. Demobilization was the order of the day. The United Nations was alright, maybe, so long as there was a veto. But definitely no more wars.

Then something changed. Winston Churchill showed up in the president’s backyard, Missouri, and announced that an iron curtain had descended down the middle of Europe. Truman already knew this. He had hinted that he was ready to show Stalin a thing or two—to make him pay for reneging on the postwar pledges he had made. Only, Truman didn’t really know what to do about it.

He had another problem. His advisers were divided. Some said, get tough. Others said, be pragmatic, accommodate, then choose your battles. But he had not prepared the American people for more battles, let alone made up his own mind about how and where to fight them.

So he decided to look decisive. The first task was to take control of his cabinet. The Secretary of State, James Byrnes, had been a rival of Truman’s in the Democratic Party, and was freelancing in the diplomatic job a bit too much for Truman’s taste. After acting as though he could strike a deal with the Russians on nearly anything, Byrnes reversed course and became a hawk.

In the other corner was the Secretary of Commerce (and former Vice President), Henry Wallace. Like Byrnes, Wallace was a formidable figure in the Party, far more than Truman had been. He urged Truman to play it safe with the Russians, to share America’s atomic know-how, to strike a modus vivendi, before it was too late.

Wallace has gone down in history as a dreamy idealist (a purveyor of “globaloney”) yet with an isolationist streak (he came from Iowa). Byrnes, who fashioned himself a wily, man-of-the-world (from South Carolina) couldn’t bear him. In September 1946, matters came to a head when Byrnes delivered an important speech in Stuttgart, Germany, pledging that American troops would remain stationed there for as long as it took to rebuild and defend the country—or at least the part of it occupied by the United States and its allies (no longer including the Soviets, evidently).

A few days later, Henry Wallace also gave a speech to a large crowd in Madison Square Garden. He denounced his own government, including the president, for setting the course for another world war. Truman was not happy. Neither was Byrnes. “You and I spent fifteen months building a bipartisan policy,” he wrote to the president. “We did a fine job convincing the world that it was a permanent policy upon which the world could rely. Wallace destroyed it in a day.”

Both men would soon leave office at Truman’s behest. During the next few years, he forged a way out of his dilemma, some would say, by wading further into it: selling the Truman Doctrine, the Marshall Plan and the North Atlantic Treaty; building a military-industrial complex and a bigger and more powerful nuclear arsenal; going to war in Korea. It didn’t take long for people to accept nearly all of this as the burden of leading the Free World.

Did he make the right choice? History has yet to deliver its final verdict. Even President Obama in the same State of the Union speech felt the need to remind us, again, that the Cold War is over, the implication being that we may choose to believe in its existence, or not.

Kenneth Weisbrode is a writer and historian. His latest book is The Year of Indecision, 1946. 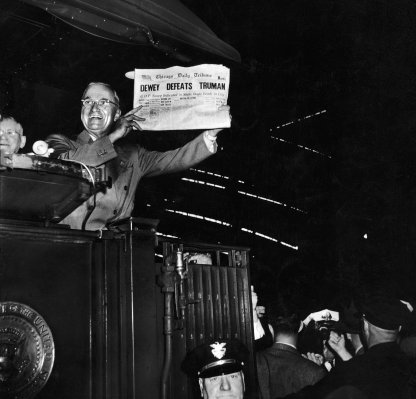 Behind the Picture: 'Dewey Defeats Truman' and the Politics of Memory
Next Up: Editor's Pick