Donald Trump’s history in business and politics is pocked with bankruptcies and fraud allegations, illegal immigrants on his payroll and donations to Democrats from his checkbooks. All were used against him during Thursday night’s debate, but it’s entirely possible none of it mattered.

Trump has comfortable leads in the polls heading toward Super Tuesday, just five days away, and his campaign so far has weathered all kinds of bad news. After months of leading the pack, Trump seems immune to those who would challenge him on positions and statements that, for anyone else, should have proved disqualifying.

That didn’t stop Florida Sen. Marco Rubio from using the last debate before voters cast ballots on Tuesday in 12 states to directly challenge the billionaire. Rival Texas Sen. Ted Cruz, too, came for Trump, but from the right. It was clear that Rubio was pitching a message that would help him survive a fight in his home state of Florida and perhaps battle toward a muddled nominating convention, while Cruz was looking at March 1 contests, including at home in Texas.

It made for a remarkable night of television, but might once again prove that the typical rules of politics do no matter in a year when a former reality TV host who promises mass deportations emerge a favorite among Christian conservatives in South Carolina and among Hispanics in Nevada.

Trump has tapped into a frustration among voters, and he has won three states so far with his pledge to round up the estimated 11 million immigrants in the country illegally. “Look at our borders. They’re like Swiss cheese,” Trump said in the debate’s opening moments, continuing his rhetoric that many in the GOP’s Establishment fret will turn off a generation of Hispanic voters.

The tense minute quickly escalated with Trump and Rubio shouting over each other. It was a snapshot that encapsulated not just this campaign but also the fight happening inside the broader GOP about its posture toward the growing immigrant population that conservatives will need to win over if ever they are to retake the White House.

Rubio, who helped write a bipartisan immigration bill that Cruz opposed, said Trump’s rhetoric doesn’t line up with his record. “A lot of these positions are new to him,” Rubio said, before showing sharp elbows. “You have brought in over a thousand people from all over the world to take those jobs instead,” he said of Trump’s companies. “You’re the only person on stage who has been fined for hiring people illegally.”

Trump said they were part-time workers during the hottest months of the year. “I’ve hired people. No one up here has hired people,” Trump said. He then returned to his signature pledge to build a wall along the United States’ border with Mexico. Rubio had a quip ready: “You’ll be using illegal immigrant labor to do it.”

Cruz, too, made a play against Trump, but from a more conservative corner. Cruz repeatedly challenge Trump on his health care policy, accusing him supporting socialized medicine. “Who would pay?” Cruz repeatedly demanded of the man standing next to him.

Trump, true to form, refused to answer, interrupted and pointed to his polling leads as answers. “I understand rules are very hard for you,” Cruz said in a condescending tone.

For any other candidate, the anti-Trump pile-on would have made for a miserable night. Yet Trump left the stage largely in one piece, even sticking around to do interviews on CNN. Trump fought Rubio to a draw, and that was enough for the GOP front-runner to leave the stage still in the pole position heading toward March 1 voting. On that date, 12 states—Alaska to Georgia—have their nominating contests and award 624 delegates to the nominating convention. It will be the biggest day on the calendar in terms of delegates, and one that will either show Republicans coalescing around an alternative to Trump, or Trump continuing his unstoppable march to the nomination.

Read More: Here Are the News Stories Mentioned at the GOP Debate

Trump seemed to mock his rivals for even trying to block him. “They were doing very badly in the polls,” Trump said of his rivals after the debate that saw Rubio and Cruz gang up on him. “I’ve dealt with the toughest people in the world over my lifetime. I’ve dealt with much tougher.”

Yet the attacks against him, coming in close quarters on stage in Houston, were the toughest he’s faced yet during a debate. He brushed many of them off as lies, even as rival campaigns were happy to provide news articles backing up the attacks. In many cases, the earlier articles were even more brutal than what the candidates themselves had to say.

Trump all but shrugged off the criticism and responded with insults. “I watched him meltdown and it was one of the saddest thing I’ve ever seen,” Trump said of Rubio.

Taken as political theater, it was a preview of how the Democrats might run against Trump should he prevail as the nominee. Piling on seldom works against Trump, especially coming so late. Rubio’s moves were likely to inspire hope among the party’s donors, who are increasingly moving toward him, but there are limits to what one night of television can do to combat a political movement led by an unpredictable mogul.

“It was a sorely needed concentrated attack on Trump, but its effectiveness will be measured more by the execution beyond just this debate,” said Kevin Madden, a Republican strategist. “Rubio needs to take this approach every day, 24 hours a day, seven days a week from here on out.” 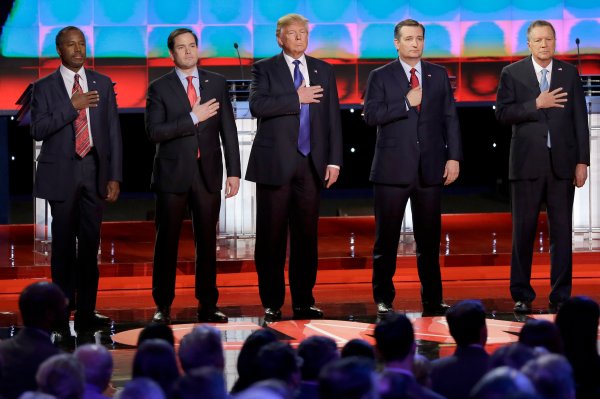 Watch the 10th Republican Debate in 3 Minutes
Next Up: Editor's Pick