Cruz Picked a Losing Fight With Trump on Polls

Texas Sen. Ted Cruz went on the offensive at the Republican debate Thursday night, attacking businessman Donald Trump for doing poorly in the polls. Which is a little like challenging Serena Williams to a tennis match: if there’s one subject Trump knows really well, it’s his own polls.

“The most important question is how do we win the general election in November, 2016,” Cruz explained, adding that “Republicans think Donald is not the right candidate to go against Hillary Clinton.”

On that count, Cruz is right. In the last ten polls on RealClearPolitics that matched Cruz up against Clinton in a general election, Cruz wins five times, ties three times, loses twice, and squeaks by with an 0.8% overall lead. Trump, on the other hand, gets creamed: he loses 80% of the time.

For one, in those same ten polls, Cruz’s primary opponent, Florida Sen. Marco Rubio, is the real victor. In a hypothetical match-up against Clinton, Rubio wins 80% of the time, with a solid 4.7% overall lead.

That’s not the kind of thing you’d expect Cruz to want to point out on the national stage.

For another, it’s pretty bold for Cruz to bring up polling numbers, considering he’s not doing particularly well against Trump among expected Republican voters in next week’s primaries.

As Trump pointed out—in an awkward exchange that earned the businessman howls of approval from the crowd—Cruz appears to losing his grip even in his home state of Texas.

“I sort of have to laugh when Ted makes a big deal out of the fact that he’s doing well in the polls. Well, I’m beating him in virtually every poll. I’m tied in Texas, by the way, which I shouldn’t be,” Trump said, apparently citing a WFAA Texas TEGNA poll this week.

In the seven states across the southern region, where Republican voters will vote next Tuesday, Trump won 37 percent of likely Republican presidential primary voters, according to an online Bloomberg Politics poll. Cruz and Florida Sen. Marco Rubio tied at 20%.

Trump also crushed both Cruz and Rubio in hypothetical, one-on-one matchups in those same states.

“I am beating him so badly that it’s, like, embarrassing even for me to say,” Trump said. “I’m beating him that badly.” 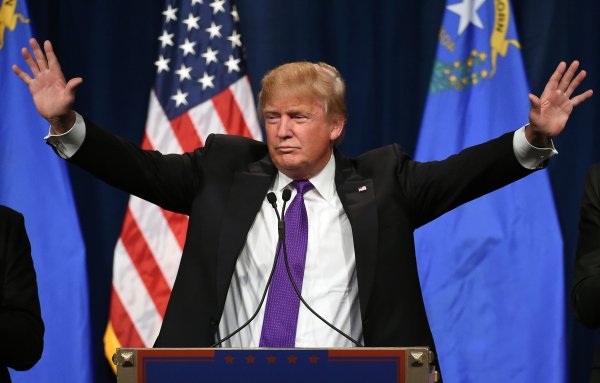