For much of the last month, Texas Sen. Ted Cruz has cast the race for the Republican nomination as a two-man contest between he and Donald Trump. At Thursday night’s debate, he looked like the odd man out.

Before a home crowd in Houston, five days before pivotal Super Tuesday, the freshman Senator had an uneven night, fading into the background for long stretches as Marco Rubio relentlessly attacked Republican frontrunner Donald Trump.

The dynamic reflected a shift that has unsettled Cruz’s campaign, which is struggling to regroup after three straight third-place finishes. The stretch includes a disappointing result in South Carolina, a contest Cruz’s campaign long believed it could win, and which may foreshadow trouble in the like-minded Southern states that dominate the so-called SEC Primary on March 1.

Super Tuesday was supposed to be a bonanza for Cruz, a day when 20% of all delegates to the Republican National Convention will be awarded. Instead it may be his final reckoning. A loss in his home state of Texas—where 155 delegates are up for grabs—would relegate him to also-ran status. And while Cruz still leads, according to the RealClearPolitics polling average, pair of surveys released in recent days show him effectively tied with Trump.

All of which is why Thursday’s debate, held mere miles from his Houston condominium, was crucial for Cruz. Yet it seemed to cement Rubio as Trump’s chief challenger, as the Florida Senator assailed Trump for the first time in the GOP nominating contest.

Cruz threw plenty of punches as well. He blasted Trump as a Democratic donor and his shifting position on health care reform. He cast Trump as an unprincipled Washington dealmaker and called him a latecomer to the anti-immigration push. “When I was leading the fight against the Gang of Eight amnesty bill, where was Donald? He was firing Dennis Rodman on Celebrity Apprentice,” Cruz said.

But the Texas Senator absorbed as many shots as he gave. Trump mocked him mercilessly. “I know you’re embarrassed. Keep fighting,” he taunted Cruz during one debate over their polling numbers against Democratic frontrunner Hillary Clinton. “Keep swinging man. Swing for the fences.”

When Cruz jabbed Trump for funding unprincipled Democratic politicians, the businessman shot back: “I funded you!” (Trump donated $5,000 to Cruz’s leadership PAC in 2014.)

Cruz’s slide in the polls comes as Rubio has emerged, in the wake of Jeb Bush’s exit, as the dominant choice of Republican elected officials and fundraisers. The Floridian seemed to cement his position as the chief anti-Trump challenger on Thursday night. As the debate unfolded, two of Cruz’s top surrogates tweeted about how well Rubio was doing.

In recent weeks, Rubio and Trump have dented Cruz’s image by squeezing him with identical attacks on Cruz’s honesty that are designed to undercut his campaign’s message of principled conservatism.

Trump took up the baton again Thursday, reviving attacks on Cruz’s likability. “You get along with nobody,” he sneered. “You don’t have the endorsement of one Republican Senator and you work with these people. You should be ashamed of yourself.”

“Donald, if you want to be liked in Washington, that’s not a good attribute for a president,” Cruz shot back.

Trump just jeered. “This is Robin Hood over here,” he gestured, jabbing Cruz for taking sweetheart loans from big banks. “Give me a break.”

The tussle was a snapshot of the shifting terrain of the nomination fight. Cruz argues policy points; Trump relies on raw bravado. The Texas Senator is a polished debater, armed with facts and smooth rejoinders.

But it’s like bringing a legal brief to a knife fight. Even when he gets the better of Trump, it’s hard to imagine him peeling away Trump supporters. You can’t market conservative ideology to post-ideological triumphalists. 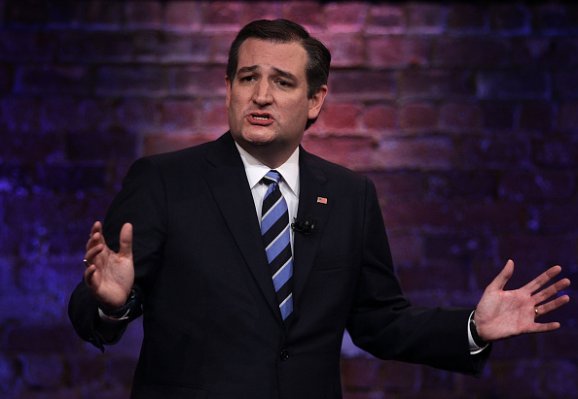