Streets are plastered with posters on the eve of elections for Parliament and the Assembly of Experts in Tehran, on Feb. 25, 2016.
Scott Peterson—Getty Images
By Kay Armin Serjoie/Tehran

As Iran gets ready to hold its first major elections since the historic nuclear deal reached with world powers last year, the political landscape has undergone an unprecedented shakeup as reformists, moderates and even conservatives—who usually compete against each other—have essentially united to confront the hardliners who have controlled Iran’s internal politics for most of the last decade.

Read More: Everything You Need to Know About Iran’s Elections

The elections on Feb. 26—which are for both the parliament as well as the Experts Assembly, the body tasked with choosing Iran’s next supreme leader—are historic, in large part because they are the first polls to take place since the implementation of the Iran nuclear deal. With that agreement and the lifting of sanctions, Iran is poised to reenter the international community—and every political faction wants to have a say in what path the Islamic Republic will take.

But what’s even more notable is that, for the first time, a wide range of political groups have united in the purpose of preventing hardliners from getting elected—even if they have to learn to live with other factions that until now they have always opposed. “For example when you look at the reformist list of candidates you can see it is a list out of necessity, not choice, the list has no common identity,” says Abdullah Ganji, managing director of Javan Daily and a political analyst. “On one hand you have Mohammadreza Aref, a reformist who believes that the parliament’s first duty is to pursue the termination of the house arrest [of Green Movement Leaders Mir Hossein Mousavi and Mehdi Karroubi]. In the other hand you have Kazem Jalali, a principalist who has officially called for the death sentence for these two, they have welcomed anyone who opposes the Paydari Front”—the main and foremost hardline political faction in Iran’s present-day political spectrum.

Iran’s parliament has been controlled by hardliners and conservatives since 2003. But the eight-year presidency of the hardliner Mahmoud Ahmadinejad during those years created a rift between these two factions, so much so that many traditional conservatives have opted for a de-facto alliance with moderates close to current President Hassan Rouhani in a bid to oust the hardliners who opposed the nuclear deal and Rouhani’s détente with the rest of the world.

Everything You Need to Know About Iran's Elections

The reformists have not held any official positions in government since their ally, the reformist Mohammad Khatami, left the presidency in 2005 and was replaced by Ahmadinejad. They’re still reeling from the crackdown by the state on their protests against the contested 2009 reelection of Ahmadinejad, with most prominent reformists either still in prison or disqualified from running by the Guardians Council, which is tasked with vetting candidates. So they have also opted to ally themselves with the moderates and to some extent conservatives.

While the political factions are more focused on the short-term future in the parliamentary elections, the Experts Assembly, which is chosen once every eight years and consists of 88 Islamic jurists, will be more important over the long term. The assembly is tasked with choosing Iran’s supreme leader whenever the present leader passes away or becomes unable to perform his duties. This has only happened once in the 37-year history of the Islamic Republic, when its founder, Ayatollah Ruhollah Khomeini, passed away in 1989 and the assembly chose the current Supreme Leader Ayatollah Seyed Ali Khamenei to replace him. But there are persistent rumors about the ill health of the 76-year-old Ayatollah Khamenei—though insiders insist the Supreme Leader is perfectly fine—and many believe that the Fifth Experts Assembly may have to choose a new leader during its tenure, which will run until 2024.

Leading the push to oust hardliners from the Experts Assembly is Akbar Hashemi Rafsanjani, a member of all four previous assemblies as well as a former president and parliament speaker, and a veteran revolutionary considered to be one of Ayatollah Khomeini’s closest confidantes. While Hashemi was once a scourge of any individual or group considered insufficiently revolutionary, he has in the last decade positioned himself as the main opponent of hardliners and a champion of moderation and pragmatism. Hoping to bank on his close relationship with Ayatollah Khomeini, he convinced the late Supreme Leader’s grandson, a rising cleric named Seyed Hassan Khomeini, to enlist for the assembly elections. But in a move that surprised many observers, the young Khomeini, as well as many other candidates close to moderates and reformists, were disqualified by the Guardians Council, forcing the moderates to change tactics and to focus on preventing the reelection of prominent hardliners to the assembly.

That’s forced the reformists to issue a list of candidates for the experts assembly that contains a number of conservatives, some even close to the hardliners, which has led to the surreal situation in which some of these candidates have actually tried to distance themselves from the list, afraid of being tainted by association. The hardliners have pounced on this, and using commentaries by analysts broadcasted by the BBC’s Persian language service, have claimed the list promoted by Hashemi is actually an effort by the U.K. to influence the election results.

But what the moderates and reformists are really worried about isn’t hardliner accusations—par for the course in Iran—but voter apathy. In the 2013 presidential elections that brought Rouhani to power, they just managed to gain an absolute majority for their candidate by convincing their base that a hardliner victory—though Ahmadinejad himself was constitutionally prevented from running for a third term—would mean the continuation of his ruinous policies for another four years. But they’ve been less successful at motivating voters this time around. Many reformist voters find it hard to vote for candidates that until a short time ago stood for the exact opposite of what the reform movement stands for. “I personally dislike some of the conservative candidates in the reformist list,” says Mohammad Noorshid, a 35-year-old IT specialist who supports the reformist agenda. “I am almost certain some of these candidates are not good choices, but still they are better than the hardliners. The last time we didn’t vote we allowed hardliners to steadily take over the city councils, the parliament and then finally the presidency and I will never forget the eight terrible years of Ahmadinejad. That’s why this time I will vote, albeit with tears in my eyes.”

Traditionally a high voter turnout favors reformists, but those efforts received a blow when the Tehran police banned any political meetings on the streets. Consequently a major part of campaigning has been moved online into social media—especially the messaging app Telegram, which is not blocked in Iran. The service shows video requests for voting for the reformist list from politicians such as ex-president Khatami, as well as famous artists and actors, along with detailed voting calculations showing just how many votes are needed to turn the balance in both chambers.

But this change of tactics has come at a cost, as the few campaign events held by moderates and reformists have been minimally attended, while their campaign on the streets of Tehran has been all but invisible. It’s a far cry from past elections when reformists ruled the streets, causing many to wonder just how many Iranians will vote on Friday and whether it will be enough to change the makeup of the parliament and the Experts Assembly—even after the historic nuclear deal. 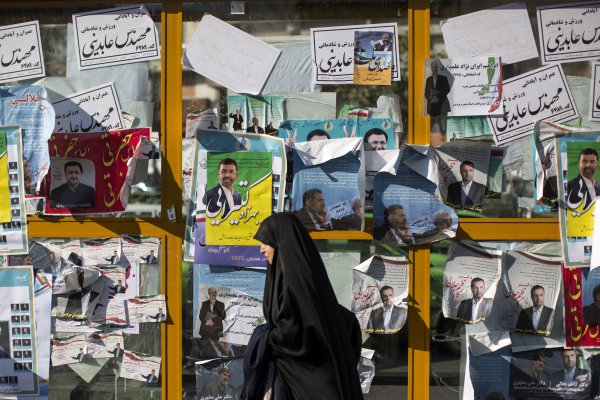 Everything You Need to Know About Iran's Elections
EDIT POST