What to Watch at Tonight's GOP Debate

The five remaining GOP candidates will face off in Houston Thursday night for the final debate before Super Tuesday, when more than 20% of the delegates to the GOP convention will be awarded. Donald Trump walks in with momentum, having won the three of the four early voting states, while the remainder will be challenged to explain their pathway to getting past their other rivals and defeating the bombastic frontrunner. So far, each candidate has struggled to stay alive, with Ted Cruz needing to win in Texas next week, and Marco Rubio and John Kasich requiring victories in Florida and Ohio respectively on March 15. But those states only keep them in the race, rather than providing them an avenue to winning it.

Trump’s rise is setting up to thwart the careful planning of Speaker of the House Paul Ryan, who is looking to turn the GOP into a party of serious policy. Trump’s freewheeling style and rhetoric fly in the face of the Speaker’s efforts over the last five months and Ryan will be loathe to simply fall in line.

Mitt Romney waded into the 2016 cycle, suggesting a “bombshell” exists in Donald Trump’s tax returns that could disqualify him from the White House — the same tactic used by Harry Reid against him in 2012. Rubio embraces the label of being an underdog. And Trump taps foreign work force for his Florida club.

The GOP’s Last, Best Chance to Trump Trump
Who can take him down? [TIME]

“The reality was that you had a year of disruption, a year of outsiders making a compelling case to people who were deeply disaffected and angry, and I just didn’t get the breakthrough that I needed in the early states and felt it was important to not move on without a clear path to winning.” — Jeb Bush on his failed presidential campaign on a conference call with donors

“We really ought to see from all three of these fellas what their taxes look like to see if there’s an issue there … I think in Donald Trump’s case, it’s likely to be a bombshell.” — Mitt Romney on Donald Trump’s tax returns 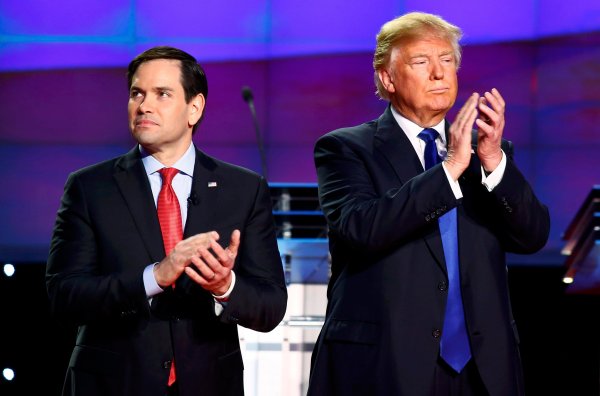 It's Crunch Time for Marco Rubio
Next Up: Editor's Pick