This week’s deployment of aircraft on Woody Island extends the reach of Chinese warplanes about 250 miles into the South China Sea.
DigitalGlobe via Getty Images
By Mark Thompson

China is playing a game of chicken with the United States in the South China Sea. All signs suggest that Beijing is betting the U.S. will blink and swerve away before it comes to war. China is brazenly challenging the hegemony that the U.S. has enjoyed on East Asian seas since World War II, as the top U.S. admiral in the Pacific warns that a shrinking U.S. military is leaving him without sufficient forces to counter the rising superpower.

While the U.S. has repeatedly called for diplomacy to settle multiple disputes over islands sprinkled across the South China Sea, China is unilaterally staking its claims by moving military gear to a growing number of them. It has been dredging the sea bottom to enlarge islets, and has built a 10,000-foot runway on one of them.

Its goal is clear: to lay claim to 90% of the South China Sea, a vital commercial waterway that carries $5 trillion in annual trade. Regional powers—including Brunei, the Philippines, Taiwan and Vietnam—are nervously, and so far vainly—waiting for the U.S. to do something to thwart the Chinese advance.

China’s latest moves echo its pattern of asserting itself even as it appears to be currying favor with Washington. Five years ago, Beijing flew its top-secret J-20 stealth fighter while then-Defense Secretary Robert Gates was in Beijing. In 2013, the U.S. says a U.S. Navy cruiser almost collided with a Chinese warship that cut across its bow in the South China Sea while Vice President Joe Biden was in the Chinese capital. Last summer, a flotilla of five Chinese ships made an unprecedented trip into the Bering Sea off the coast of Alaska, while Obama was visiting the state.

Last week, the U.S. confirmed that China has deployed HQ-9 anti-aircraft missile batteries to Woody Island in the South China Sea as Obama was meeting with Southeast Asian leaders in Palm Springs, Calif. And on Tuesday, the Pentagon said the Chinese air force had dispatched J-11 and JH-7 warplanes to the same island, as Chinese Foreign Minister Wang Yi was in the middle of a visit to Washington.

“The fact is there have been steps by China, by Vietnam, by others that have unfortunately created an escalatory cycle,” Secretary of State John Kerry said during a press conference with Wang on Tuesday. “What we’re trying to do is break that.” Wang said nations in the region could settle their own differences. “There have not been any problems with freedom of navigation in the South China Sea,” he said.

This is happening as much of Washington’s national-security apparatus is focused on the war against ISIS and the increasing momentum of an anti-U.S. alliance among Syrian dictator Bashar Assad and his Iranian and Russian partners. But U.S. Navy officials, who have ruled the seas off China’s coast for more than 70 years, are increasingly sounding the alarm.

“China’s intent to militarize the South China Sea is as certain as a traffic jam in D.C.,” Admiral Harry Harris, chief of U.S. Pacific Command, told the House Armed Services Committee on Wednesday. “I need weapon systems of increase lethality that go faster, go further and are more survivable.,” he added. “I’m comfortable where we are today, but today we’re not at war, and I think an important point.”

On Tuesday, before the Senate Armed Services Committee, Harris said that the Navy is providing him with only about 62% of the attack-submarine patrols he says he need. He acknowledged the U.S. is stretched in the region, saying he has encouraged U.S. allies in the region to conduct regular freedom-of-navigation operations near the islands claimed by China to make clear they don’t accept Beijing’s territorial claims.

Unsurprisingly, all this is likely to increase tensions. “A significant increase in Chinese forces and capabilities will lead to more frequent run-ins with its neighbors” in the South China Sea, warns Gregory Poling, director of the Asia Maritime Transparency Initiative at the Center for Strategic and International Studies, a Washington think tank. This year, he adds, “promises to be a much tenser year in the South China Sea.” 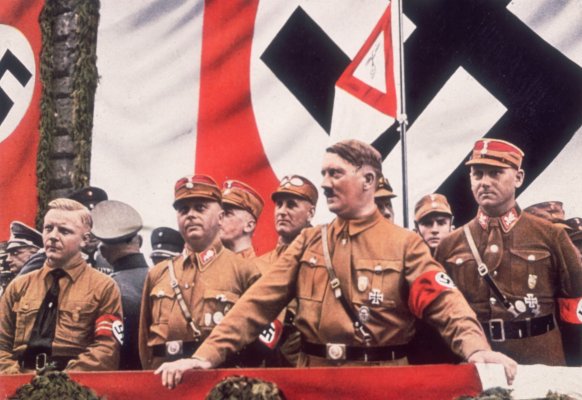 The Immortal Myth of Hitler's Deformed Genitals
Next Up: Editor's Pick