Everything You Need to Know About the 2016 Oscars

Between a years-long reputation for producing a boring ceremony and the recent #OscarsSoWhite controversy, the Academy has a lot to prove. Here’s a complete guide to the 88th Academy Awards that air on ABC at 8:30 p.m. ET on Sunday, Feb. 28., from the shoo-ins to the underdogs to the newfound promise for more gif-able speeches.

Who’s hosting? Comedian Chris Rock will host the awards for a second time, and his opening monologue is among the most highly anticipated in recent years. Rock came under pressure to pull out of the gig in response to the staggering lack of diversity among this year’s crop of acting nominees, and rumors followed that he was changing his monologue to address the controversy (which he later denied). Either way, it’s safe to assume that Rock—who tweeted the day after the nominations were announced that the Oscars were like “The White BET Awards”—won’t stay mum on the issue.

Who’s presenting? This year’s diverse group of presenters stands out in stark contrast to the lack of diversity among nominees, with many critics suggesting that the Academy can’t make up for one wrong with another right. Quincy Jones has said he plans to use his time onstage to address the issue. Many past winners, including Morgan Freeman, Common, Whoopi Goldberg and Louis Gossett, Jr., will present, as well as Priyanka Chopra, Kevin Hart, Daisy Ridley, Jacob Tremblay and Margot Robbie. See a complete list here.

Who’s performing? Three of the five nominees will perform their Oscar-nominated original songs. Lady Gaga, who may well get one step closer to an EGOT, will perform “Til It Happens to You” from The Hunting Ground; Sam Smith will croon Spectre’s “Writing’s on the Wall”; and the Weeknd will carry the torch for Fifty Shades of Grey with “Earned It.” Performances of the other two nominated songs, from Youth and Racing Extinction, were chopped to save time. The Foo Fighters’ Dave Grohl will also be there to serve the evening with a slice of rock and roll with a mysterious “special performance.”

Who won’t be there—and where will they be instead? Several people who might otherwise have attended the ceremony have announced plans not to go, as a statement against the lack of inclusion among nominees. Spike Lee will be at a Knicks game. Jada Pinkett Smith and Will Smith will neither attend nor watch, though they haven’t said what they’ll do instead. Selma director Ava DuVernay and Creed director Ryan Coogler will attend #JusticeForFlint, a special event supporting Flint, Mich., a mostly black city in crisis because of a contaminated water supply.

Who’s expected to win? The Best Picture field is wide open at this stage, with predictions having shifted from Spotlight early on to The Big Short and, more recently, The Revenant. In the lead acting categories, Leonardo DiCaprio and Brie Larson have dominated the conversation for their roles, respectively, in The Revenant and Room. Sylvester Stallone is widely expected to nab Best Supporting Actor for Creed, though many feel a surprise upset by Bridge of Spies’ Mark Rylance would be well-deserved. If he wins Best Director, Alejandro Iñárritu would be the first director since 1950 to win the award two years in a row. Other frontrunners include Inside Out for Best Animated Feature and Son of Saul for Best Foreign Language Film. Mad Max: Fury Road has 10 nominations, and could see some wins in the technical categories, if nothing else.

Anything different about this year? Why, yes: This year’s producers, Reginald Hudlin and David Hill, have done viewers a solid with an attempt to make acceptance speeches a bit more engaging. Nominees will submit, in advance, a list of the people they’d like to thank, and those names will run across the bottom of the screen while the winners fill their 45 seconds (ideally) with something more entertaining (they are entertainers, after all). Could this be the year someone bests the aw-shucks charm of Julie Andrews, the brevity of Joe Pesci or the earnest humor of Robin Williams, whose speech included both Yiddish and the compliment, “You’re a can of corn”? It could, indeed. 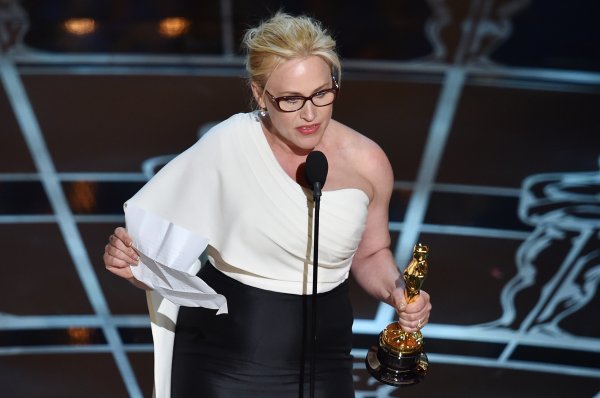 This Oscars Change Will Help Put an End to Boring Acceptance Speeches
Next Up: Editor's Pick