Why Trump Keeps Winning and Winning

Three’s a charm for Donald Trump, who won his third-straight contest by double-digit margins Tuesday evening in Nevada. The win is moving the GOP Establishment from bargaining to depression, as it seeks to cope with Trump’s front-runner status. No major organized effort has yet been launched to take on Trump, who is expected to pick up hundreds of delegates to the GOP convention next week on Super Tuesday, partly because party operatives have found no effective way to address the phenomenon. Criticism of his record or temperament or policy positions have been met with equal skepticism from voters who are reacting to his reflection of their anger and frustration with the political process. In the record-turnout caucuses, which were still remarkably low-turnout as most primaries are concerned, Trump racked up more votes than the next two finishers combined.

Marco Rubio and Ted Cruz finished second and third, respectively, repeating the order of finish in South Carolina this weekend. And as in South Carolina the pair were just thousands of votes apart, depriving either of the momentum needed to consolidate the anti-Trump vote. With Super Tuesday six days away, Rubio and Cruz are maintaining their fire on each other in hopes of changing that dynamic. The coming days will provide a significant test for both candidates, as Rubio searches for a state he can finally win outright and Cruz works to overcome a week of negative headlines critical of his character and trustworthiness to score a must-win victory in his home state of Texas. Meanwhile John Kasich and Ben Carson remained in a clearly defined lower tier, out of serious contention for the nomination at this point.

Across the aisle, Hillary Clinton‘s lock on South Carolina appears secure as Bernie Sanders‘ campaign lowers expectations in the Palmetto State, and her path to the nomination once again seems to be clear as she approaches favorable voting states on Super Tuesday.

Mega-Donors Shy Away From Fight With Trump
Fearful of counterattacks, rich conservatives and their allies are mostly holding their fire [Politico]

“I know Ted Cruz, he is not a liar.” — Glenn Beck defending Cruz Tuesday night from attacks on his credibility

“It’s going to be an amazing two months. We might not even need the two months, folks.” — Donald Trump expressing optimism that he can swiftly lock up the GOP nomination 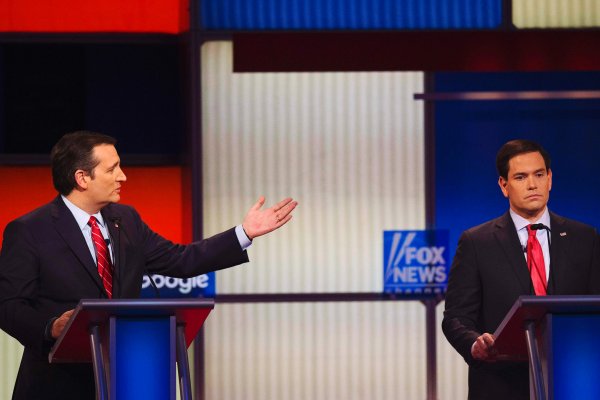 What the Rubio-Cruz Fight Means
Next Up: Editor's Pick