Former Secretary of State Hillary Clinton and Vermont Sen. Bernie Sanders made their pitches to black voters in back-to-back appearances at a town hall hosted by CNN.

Held just days before a Democratic primary in South Carolina, where the majority of the electorate in 2008 was African-American, the town hall featured a wide-ranging discussion, but the two candidates returned several times to ideas they hoped would attract black voters.

Here are five things you may have missed.

Sanders clarified his college plan. Clinton’s surrogates such as Rep. James Clyburn of South Carolina have repeatedly knocked Sanders, saying his free college tuition plan would endanger historically black schools that rely on tuition. The Vermont Senator sought to put to rest criticism of his college plan by saying he would expand funding for historically black colleges and universities, something that has not previously been part of his proposal.

Sanders called birthers racist. Sanders slammed Republicans for obstructionism in Congress and suggested that those who have questioned that President Obama was born in the United States are racists. “We have been dealing in the last seven years with an unprecedented level of obstructionism against President Obama.” Speaking specifically about the birther movement, Sanders said “this is a racist effort to try to delegitimize the president of the United States.”

Democratic presidential candidate Hillary Clinton poses for photos with audience members after participating in a CNN town hall event at the University of South Carolina School of Law in Columbia, Feb. 23, 2016.
Gerald Herbert—AP

Clinton grappled with societal racism. When a black student told Clinton that she had recently decided to wear her hair natural and had been looked at differently, Clinton was empathetic. She said white Americans have a particular duty to cross racial divides. “We have serious challenges and I think its important for people, and particularly white people, to be honest about this and our experiences may not equip us to understand what our fellow African-American citizens go through every single day,” she said.

She resisted calls to release her Wall Street transcripts. Sanders has called on Clinton to release the transcripts of her private speeches to Wall Street institutions including Goldman Sachs, as well as pharmaceutical companies. Clinton has demurred, and did again on Tuesday. “Sure, if everybody does it, and that includes the Republicans, because we know they have made a lot of speeches,” Clinton said. “Why is there one standard for me and not for everybody else?”

Clinton named her Republican friends. When Clinton was asked whether she had a Justice Anthony Scalia to her Justice Ruth Bader Ginsburg, she named Republicans in Congress she has worked with. “I worked with Lindsey Graham to get health care for the National Guard, Clinton said. “I traveled with John McCain, who I grew to very much like and consider a friend.” She also mentioned Sen. Susan Collins of Maine and former House Majority Leader Tom DeLay. “If you don’t have those relationships, it’s really hard to get things done,” Clinton said. 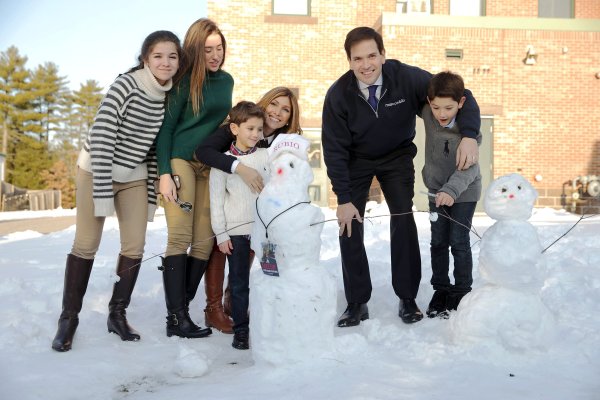 See Photos of 2016 Presidential Candidates' Families
Next Up: Editor's Pick