Donald J. Trump, the billionaire whose name floats on a hotel high above the Las Vegas Strip, claimed a third consecutive win on Tuesday, besting rivals Ted Cruz and Marco Rubio in Nevada’s little-attended caucuses. It was the latest reminder that the brash former reality-show star remained a player in the Republicans’ rough-and-tumble nominating fight.

Sounding as though the nomination were already his — and a win in November assured — Trump told his crowd in Las Vegas, “You’re going to be proud of your President and even prouder of your country.”

The Nevada caucuses were marred with allegations of dodgy behavior as balloting happened. The state party, which runs the caucuses, defended itself and said no allegations of wrongdoing or impropriety had been reported. Even so, it was obvious Cruz and Rubio would have plenty of reasons to cast doubt on Trump’s win.

Caucuses shut down at 9 p.m. local time (midnight on the East Coast). Hours before that, Twitter and other social-media platforms were screaming about fraud. After all, there were pictures on Twitter of ballot collectors dressed in Trump gear.

The caucuses were not a state-run affair, as primaries in other states are. Instead, they were being run by the state GOP, and its leaders were feeling the criticism that, in typical online fashion, seemed to gain steam with each retweet.

“It’s not against the rules for volunteers to wear candidate gear,” the state party tweeted. “Volunteers went through extensive training & are doing a great job.”

In another tweet, the party tried to downplay the controversies: “There have been no official reports of voting irregularities or violations.”

Nevadans decided they were fine being the third domino in a row to fall in favor for Trump. The caucuses came amid a winnowing of the GOP field down to five, although it really was just a three-man race in Nevada.

Advisers to Rubio and Cruz had expected Trump to prevail here and were looking ahead to the next-to-vote states. Rubio watched the returns in Michigan, where he needs to make a stand against neighboring Ohio’s Governor Kasich. Cruz eyed Southern states that are part of the so-called SEC Primary.

And Kasich looked at other states that go March 1: Vermont and Massachusetts.

Yet it was entirely plausible that Trump could run the table going forward. Voters have, time and time again, have cast ballots channeling their anger and frustration with Washington. No one better serves that dissatisfaction than Trump, who uses profanity and bluster to make those voters feels as though someone is listening. Even in his slogan — “Make America great again” — Trump urges Americans to acknowledge their disappointment in the present, and then their optimism for the future.

Cruz and Rubio, meanwhile, are locked in an increasingly testy fight behind Trump. The pair essentially tied in South Carolina on Saturday, a contest that, at least for the moment, relegated Kasich and Carson to a second tier — and forced Jeb Bush from the race altogether. Rubio edged out Cruz in South Carolina, although both campaigns expected Tuesday’s results in Nevada to be tight.

Campaigns were careful not to set expectations too high in the volatile state. “Our hope and expectation is to do well here,” Cruz told reporters Sunday in Pahrump, Nev. Representative Jason Chaffetz, a Rubio ally, said his candidate needs only finish in the “top three” — in what is essentially a three-man race — to claim victory.

At stake are just 30 of the 2,472 delegates who will attend the 2016 Republican National Convention in Cleveland, and they will be divided proportionally among the finishers. So far, only 102 have been awarded in Iowa, New Hampshire and South Carolina, with Trump leading with 68.

Those early states helped winnow the field of contenders such as New Jersey Governor Chris Christie, Kentucky Senator Rand Paul and former Arkansas governor Mike Huckabee. Tuesday’s results were unlikely to trim the field any more. Kasich was largely sitting out the Nevada contest, focusing on larger contests set for the coming weeks, while Carson’s phantom campaign has held only a handful of campaign events between presidential debates.

The five remaining candidates were set to meet Thursday night in Houston for a debate ahead of the biggest day yet for Republicans: March 1, when 13 states were set to weigh in. The Super Tuesday contest was scheduled to award 571 delegates — the biggest chunk so far.

That’s why Rubio was set to watch the Nevada caucuses from Grand Rapids,
Mich., which votes on March 8. Kasich was set to be in Georgia. Cruz and Trump were scheduled to be in Nevada on caucus night, but the evening’s event was unlikely to upend a campaign that has already seen front runners fall, a billionaire appeal to struggling working-class voters and former Iowa winners pack their bags and exit.

That’s why Trump holds the best hand here — and not just because his name is splashed across a golden tower on the famous Las Vegas Strip. Trump better than most understands that voters are looking for an outsider and a fighter. It’s good odds that Trump will add to his growing list of wins. 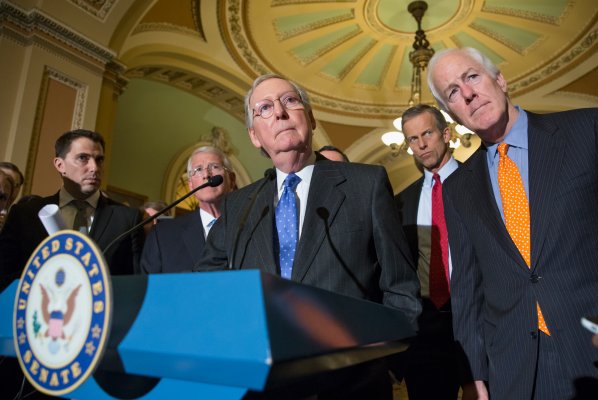