Céline Dion will resume her Las Vegas residency at The Colosseum on Tuesday for her first show following husband René Angélil‘sdeath.

Dion, 47, announced on Monday that she will dedicate the opening of the first show to Angélil.

“We are pleased to announce the return of Céline to The Colosseum at Caesars Palace in Las Vegas,” a message on her website read. “Join Céline and her fans in Las Vegas for a trip down memory lane, live at The Colosseum, to celebrate her return and witness Céline’s loving tribute to René.”

A source tells PEOPLE, “the first 10 minutes will be streamed” onCelineDion.com. “I am sure it will be emotional,” adds the source. “She will not heal quickly.”

Angélil died of throat cancer at his home in Henderson, Nevada on January 14. He was 73.

Three weeks after her husband’s death, Dion returned to The Colosseum stagewhere colleagues, friends and family – including Dion’s 14-year-old son René-Charles, as well as Angélil’s children from former marriages, Patrick, Jean-Pierre and Anne-Marie – listened to her emotional speech about the late music manager in addition to the 15 others who spoke at the tribute event.

The singer first met Angélil when she was 12 years old. He discovered her after she submitted a demo tape of a song she had written with her mother in 1980. The pair would later marry in 1994. 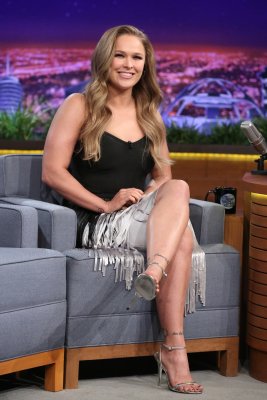 Ronda Rousey Reveals What Video Game Character She'd Most Like to Play
Next Up: Editor's Pick