On Sunday, Rick Tyler, Cruz’s top spokesman and a frequent surrogate on television news, tweeted a story purporting to show that Rubio had maligned the Bible, which was later proved false. Rubio held a press conference Monday morning criticizing Cruz and his campaign for what he termed a “pattern” of falsehoods, going back to the campaign’s efforts to spread the false word that Ben Carson was dropping out of the race on the night of the Iowa caucuses. Rubio asked whether anyone would be held accountable on the Cruz campaign.

“This morning, I asked for Rick Tyler’s resignation,” Cruz told reporters at a press conference in Las Vegas before a campaign event. Tyler had deleted the tweet and apologized in a Facebook posting early Monday. He was reportedly preparing to appear on MSNBC on Cruz’s behalf just before the press conference.

“Rick Tyler is a good man,” Cruz said. “This was a grave error of judgment. It turned out the news story he sent around was false, but I’ll tell you that even if it’s true, we are not a campaign that is going to question the faith of another candidate. Even if it was true, our campaign should not have sent it.”

But Cruz criticized Rubio and GOP front runner Donald Trump for reflexively calling him a liar when he criticizes their records, maintaining that his campaign has only made truthful arguments against his rivals, but for the Tyler tweet.

“None of you have heard me throw the kind of insults at Marco Rubio that he throws at me every single day,” Cruz said. “If other candidates choose to go into the gutter, we will not do the same.” 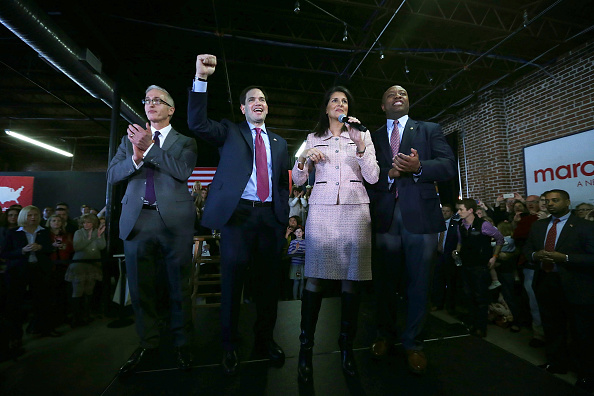 Rubio Picks Up Endorsements After Bush Ends Campaign
Next Up: Editor's Pick