DAYTONA BEACH, Fla. — The official margin of victory is .0010 seconds, a figure that was rounded down from .0011, which was the number that the electronic implements that calculate such things produced on its first pass at estimating the space between Denny Hamlin’s victory and Martin Truex’s loss in Sunday’s 58th running of the Daytona 500. That’s the finest victory since computers have been keeping score. That’s three times faster than the blink of an eye, hardly quick enough to take in Hamlin as he nudged his black Joe Gibbs machine inches ahead of Truex’s Furniture Row car on the final laps of a race that was long on dramatic twists.

Most who saw that photo finish live will be forgiven for thinking that Truex was the victor. That includes the New Jersey boy himself, who was fairly convinced that his positioning on the low line of the track would prove his E-Z Pass to Victory Lane. “I knew it was really close,” he said. “I just said [to myself], ‘Damn, that was close.’ [I] tried to look at the big screen, as you do. My spotter was going absolutely ballistic on the radio, screaming. I couldn’t tell what the heck was going on. [We] did our best to beat him at the line, but just came up short.”

While Truex did not get the ending he had hoped, the final act he co-authored with Hamlin transformed NASCAR’s premier event into a certified blockbuster—and in its very first show following a massive renovation to their grandest stage, no less. Keep in mind: this was a result achieved without any fettling from the Cup series’ myriad new rules for the upcoming season, making it something for the sport’s many hardline fans to truly savor. What’s more, this conclusion drew a massive general audience without a bankable star in a headlining role. The retired Jeff Gordon watched from the FOX booth, the retiring Tony Stewart joined the broadcast via phone and Dale Earnhardt Jr. spiraled out of the race after botching a drafting move in the middle of the pack. Surely NASCAR’s corporate stewards are pinching themselves, still.

This year the Great American Race made itself. How did this come to be? Hamlin still can’t quite explain it. “It just all happened so quickly,” he said. “Usually in these things, you’re leading with five laps to go. And usually whoever’s leading wins the race. You have time to think about it. You’re getting emotional while you’re still racing. For me, I was so caught in the moment. And when we won the race, it was like, OK, now what just happened?”

NASCAR Restarts Its Season Without the Fanfare

As with most automotive mysteries, it’s best to start under the hood. Those tens of thousandths of a second might belong to Hamlin but, let’s be clear, the day belonged to Toyota Racing Development. Celebrating its 10th year in NASCAR, the manufacturer’s imprimatur was all over this contest, “the single biggest race in our company’s history,” according to TRD majordomo David Wilson.

Among the modest number of franchises TRD counts among its partners is Joe Gibbs Racing, the four-car superteam that would chaperon the company into stock car racing; and Furniture Row, its splash free-agent signing of the 2016 season. The idea that Furniture Row would abandon Chevrolet, the motorsports overdog that carried Truex all the way to the final round of the 2015 Chase, for a manufacturer that Gibbs drivers didn’t hesitate to publicly savage just a year and a half ago speaks to the strides TRD has made in improving the power and reliability of its engines. “It’s taken time for us to collectively build an organization with our team partners that is capable of winning races and competing for championships,” Wilson added.

The improvement was obvious last year, as the Gibbs team won a staggering 14 races and Kyle Busch rallied from a disabling accident in the 2015 500 to win the Sprint Cup championship. That hot streak carried into Daytona, where Toyota cars topped the leader boards in preamble races (Hamlin won the Sprint Unlimited, and Busch triumphed in the second Can-Am duel) and in the practice sessions during the week leading up to Sunday’s feature. “We knew in practice a few days ago that our five cars running together ran faster than the pack,” Hamlin said. “And I was thinking, ‘Man, why don’t we just stay in line, run the bottom; no one should be able to pass us.’”

Restrictor plate races have a way of bringing out a collaborative spirit among competitors. The nature of the competition—which, by capping engine power, makes a far greater game of slipstreaming—all but demands that cars work together to build momentum. This organizes the grid into small confederations that are built upon, well, all sorts of things: driving habits, pit positioning, speedway experience. When big franchises can’t band together, they join up with smaller ones. When one driver can’t get ahead, he pushes the one in front of him, hoping their magnetic energy turns into pure magic.

Even though the Toyotas were a speedy group, sticking together was easier said than done. Matt Kenseth qualified on the front row, in second place, but was sent to the back upon opting for a backup car. He totaled his primary ride in the second Can-Am duel race on Thursday. After a final practice session on Saturday, he was not all that enthusiastic about his new lot. “It’s not as easy to pass [here] as it used to be,” he said. Truex was shunted to the back, too, after totaling his machine in that same wreck. By Sunday he was on his third rig. Hamlin and his Gibbs teammate Carl Edwards were in the 10th and 11th spot, respectively, which doesn’t seem bad until it’s time to duck into the pits, where traffic can pose serious problems.

But when the green flag flew, Hamlin and Busch immediately established themselves on the bottom groove as the Hendrick cars of rookie Chase Elliott (who started on the pole) and the veteran Earnhardt led the pack. When Elliott drifted away from the leaders and out into the middle lane, he wobbled out of control and nicked Edwards’s car on his way off the track. The impact left a massive crack on that Toyota’s right front end, a massive drag in a race predicated upon aerodynamics.

While Edwards’s crew attended to that blemish, Kenseth, through great pit positioning (at the end of the lane, thanks to his strong qualifying time) and quick service times (Gibbs has some of the best in the business), he eventually hooked up with the rest of the head of the Toyota train, led by Hamlin, with Busch and Truex in tow. Each car enjoyed a few laps in the lead; Hamlin collected the most with a race-high 95.

As the laps wore on, it looked like the strategy would fall apart. But no. With two to go, Kenseth was out front and seemly destined to remain there. Edwards, miraculously, made it all the way up to fifth even though his flapping replacement front end panel seemed one strong side gust from ripping right off and into the roaring pack cars behind him. Just ahead was Busch, in third. In between was Hamlin, who’d let a little steam out of the Toyota train after flubbing a late-green flag pit stop (which opened a door for Joey Logano, the winner of last year’s 500). “I got cocky,” said Hamlin, who recovered from his error. Over the radio, he could hear how “I’m beating everyone off pit road every time we’ve ever had a green flag pit stop or caution. I’m sitting here like the pit road master. Then I come in there and blow it and screw my tires up on the last stop that actually counts.”

Then there was Truex in second, circling the bottom of the track, the tackiest strip all afternoon. Seemingly out of position to win, Hamlin, like Edwards, consigned himself to a defensive role. When Kevin Harvick mounted a charge on the top line, Hamlin swung up to fend the Stewart Haas driver off. Then something weird happened. “[Harvick] just kept pushing me and hitting my back bumper. Kept lunging more and more forward. Next thing you know I’ve got a huge run. I’m thinking, ‘What am I gonna do with this?’”

Before he knew it he was bearing down on Kenseth. When he moved up to block Hamlin’s momentum, he lost control, drifted into a wake, brushed the wall and sank like a stone. All the while Hamlin kept steaming ahead, past Busch, until he found himself just alongside Truex coming out of the last turn on the last lap. In that moment Hamlin’s thoughts drifted back to the Daytona Xfinity race a day earlier, which Elliott won after fending off an onrushing Logano on the last lap. “I saw him laying up against Joey and was like, ‘Wow, you just saw the run stop.’”

Of course Hamlin’s track positioning on Sunday (on the top groove) was not nearly as good as Elliott’s had been on Saturday (on the bottom). And yet the Gibbs driver felt like he could make it work. By the time Truex moved up his line in an attempt to take a bit of air away from Hamlin, it was too late. “I just grinded against his door and stopped his run.” And then, in less than a blink, he was past him.

Once Hamlin sorted out exactly what had just happened, the enormity of the moment sunk in. As a second grader, he had made winning the 500 a written goal. And now, in victory, here was his mother tweeting the proof. Here he was flanked by some of the silent lieutenants who make up TRD’s behind-the-scenes army and Gibbs, which snapped a 23-year losing streak in the Daytona 500. Also on hand was the Gibbs’ team president and owner’s son J.D. Gibbs, whose had been taken away from racing business for a while now by a health issue. In fact, he celebrated his 47th birthday on Sunday.

So it was a special race then, one Hamlin, echoing the Toyota majordomo, called “the biggest race of my career as far as stature is concerned.” And yet, “Realistically, this is a team victory. It’s the best I’ve ever seen any teamwork together for the Daytona 500. My name will be on the trophy, but it should probably be cut up four or five different ways.”

Would he have preferred to win by a larger margin? “No. You want to win the tight ones—well, it would be fun to win by a lap. But [this is], like, storybook. You make a pass on the last corner of the last lap of the Daytona 500. That’s what makes it so cool.” 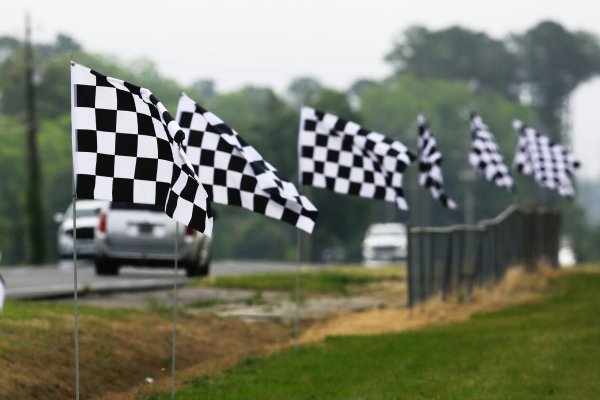 NASCAR Restarts Its Season Without the Fanfare
EDIT POST