At Least 36 Dead in Fiji After Historic Tropical Cyclone

Parts of Fiji remain paralyzed after a historically massive tropical cyclone struck the island nation over the weekend, killing at least 36 people.

Tropical Cyclone Winston, the most powerful tempest ever documented in the southern hemisphere, made landfall over the Fijian archipelago Saturday night with wind gusts that reached 200 m.p.h, AFP reported. The storm razed villages and caused extensive flooding across the island nation, driving thousands of people from their homes.

“The damage has been widespread, homes have been destroyed, many low-lying areas have flooded, and many people have been left stunned and confused about what to do,” Fijian Prime Minister Voreqe Bainimarama said Sunday in a televised statement to the country that was quoted by the Weather Channel.

The country has declared a 30-day state of emergency, during which military and police forces will assist the extensive cleanup effort. Schools across Fiji will remain closed for another week.

Tourism officials said that no tourists were among the dead, and that most hotels and resorts on Fiji’s main island, Viti Levu, withstood the storm. Concern lies with the more remote regions of the country’s outlying islands, where entire villages are said to have been flattened. Government officials said that it would dispatch aid boats to these islands on Tuesday.

“It is likely that smaller villages across Fiji will have suffered the most, given their infrastructures would be too weak to withstand the power of a Category 5 cyclone,” Alice Clements, a spokeswoman for UNICEF who lives in Suva, Fiji’s capital, told CNN. “Families may have lost their homes and crops, therefore leaving them without shelter, food and a livelihood.” 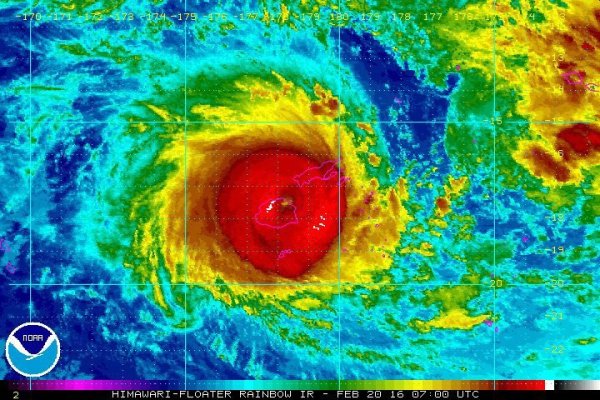 Fiji on Lockdown as Massive Cyclone Hits
Next Up: Editor's Pick