The Trump-Pope showdown seems to be coming to a close. Republican presidential frontrunner Donald Trump praised Pope Francis just a day after he slammed the pontiff for criticizing his stance on immigration.

Trump called Pope Francis “a terrific person” in an interview with Greta Van Susteren for Fox News set to air Friday night, and cast their disagreement as a miscommunication. “I don’t think the Pope really understood in terms of the crime problem and the problems of illegal immigration.”

Pope Francis indirectly criticized Trump’s immigration policy in response to a direct question on the papal plane Wednesday.“A person who thinks only about building walls, wherever they may be, and not building bridges, is not Christian,” he said when a reporter asked him about Trump. “That is not the gospel.”

During a rally in South Carolina on Thursday, Trump called out the Pope for slamming him. “For a religious leader to question a person’s faith is disgraceful,” he told a cheering crowd, alleging that the Pope was being pressured by the Mexican government. “They are using the Pope as a pawn and they should be ashamed of themselves for doing so,” he said.

A spokesman for the Pope weighed in Friday, clarifying that the comments were not intended to sway American voters. “In no way was this a personal attack, nor an indication of how to vote,” said Vatican spokesman Rev. Federico Lombardi.

The semi-apology seems to have placated Trump, who appears to want to bury the hatchet with the leader of the Catholic Church. “The fact that he said that, I’m very honored by it,” he told Fox. 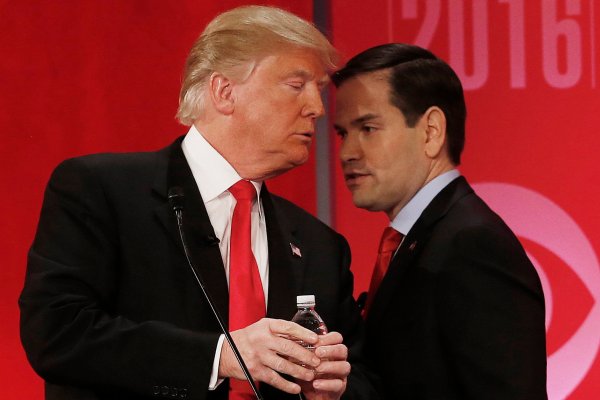 Why Trump Hasn't Laid a Finger on Marco Rubio
Next Up: Editor's Pick