Donald Trump Is Wrong About Torture

Regan Arts
Ideas
By Kermit Roosevelt
Kermit Roosevelt is a professor of constitutional law at the University of Pennsylvania Law School and the author of Allegiance.

Many Americans seem to be suffering from compassion fatigue, ready to sacrifice values for safety. Case in point: the increasing support of Donald Trump, whose wildly misguided national-security proposals often single out ethnic groups and conflict with our nation’s ideals.

“Torture works,” Trump proclaimed at a campaign event in Bluffton, S.C., on Wednesday. This follows his promise at the Republican debate in New Hampshire to approve waterboarding for terrorism suspects if elected president. “I would bring back waterboarding and I’d bring back a hell of a lot worse than waterboarding,” he said. His sweeping rhetoric plays on fear and instigates racial intolerance.

People tend to believe that government leaders will ultimately do what’s right—that what they do must be the right thing. But it isn’t, at least not always, as history shows. That’s a lesson worth honoring today, the Day of Remembrance, which commemorates the Japanese-American internment during World War II.

Franklin D. Roosevelt did the wrong thing when it came to national security during World War II. With Executive Order 9066, Roosevelt authorized the imprisonment of more than 100,000 innocent Japanese-American citizens. “It was wrong, but I would not be surprised to see it happen again,” Supreme Court Justice Antonin Scalia said of the internment in 2014. “In times of war, the laws fall silent.” So, too, does the electorate if it makes them feel safer. Fear eclipses moral virtue.

How do these things happen? I wrote Allegiance, a novel centered on national security and the Supreme Court in World War II to understand how we come to make these mistakes and how we can do better. What I didn’t expect to find was how closely the misconduct and ineptitude within government then parallel our world today.

Both episodes started with a shocking attack—Pearl Harbor and 9/11. After the attacks, Americans felt fear, and in trying to find people who were dangerous, instead targeted people who looked, spoke or worshiped differently. The government tried to make us feel safer by hitting back. After Pearl Harbor, the government hit back in part at U.S. citizens, imprisoning them solely because of their heritage. After 9/11, internal government documents suggested one reason to invade Iraq: Even if there was no connection between Saddam Hussein and Osama bin Laden, we needed to topple an Arab government in response.

Sometimes such actions are just a mistake, but sometimes they are something worse. Too often, national security can serve as a justification for political opportunism or even criminal acts. As I researched my novel, I was simultaneously learning about the post-9/11 world. And in each case I found error, conspiracy and self-interested cover-ups. Some people fear, some people err, and other people use that fear and error for their own purposes.

In 2005, I got a call from a military reservist who’d been activated to defend a Guantanamo detainee and wanted a constitutional law expert to consult. He told me that we detained people we knew were innocent, we tortured people who turned out to be innocent, and we lied about almost all of it. If that’s what it took to be safe, I would rather be good.

Trump seems to believe that we are good simply because we are Americans, and that we remain good no matter what we do. Many voters seem poised to follow his lead—to abandon the very values that distinguish us from our enemies, the principles that allow us to claim that right is on our side.

The results of this presidential election will reflect not only the character of our nation, but our individual character, too. These episodes arise from a fundamental failure of empathy on the part of the American people. We are a democracy, and the government reflects our values—our strength and our weakness, our courage and our fear. What will stop us from making the same mistakes again—and regretting them soon after—is to cultivate empathy and hold on to it in times of crisis. We can show either that we have learned from the past, or that we are willing to deny our mistakes and repeat them over and over.

Donald Trump will likely never admit error. But we can learn more from tragic figures like Francis Biddle, Roosevelt’s attorney general, who realized that what he’d done was wrong. He kept a picture on the wall of his office of a little Japanese-American boy waving a flag and leaning out the window of a train that was taking him to the camps. That boy mattered, and hurting him made us no safer.

Whose interests count? Who do we protect? And who do we sacrifice to make the rest of us feel safer? In times of crisis, we tend to get those questions wrong. That’s what we must remember today. 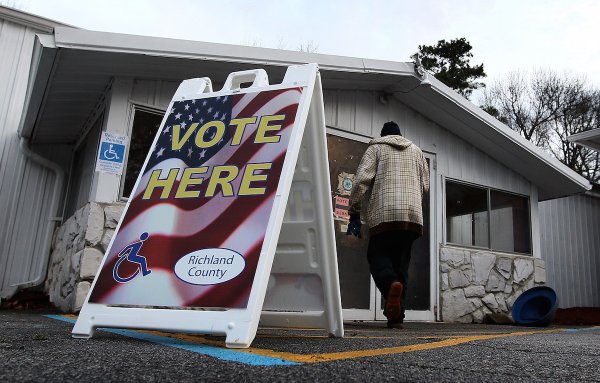 This Is How South Carolina Got Its Reputation for Dirty Politics
Next Up: Editor's Pick